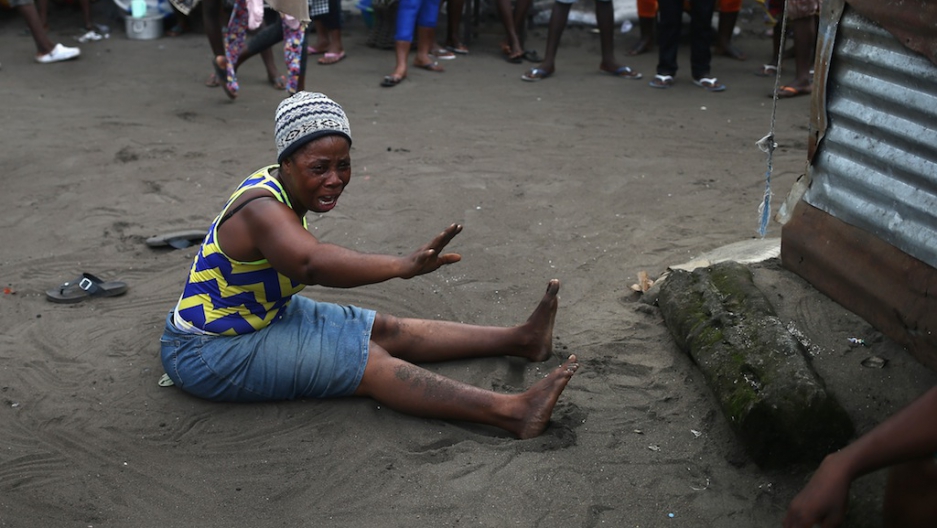 A woman grieves as Ebola burial team members arrive to take away the body of a loved one.
Credit: John Moore
Share

Editor's note: This story was first published on Oct. 10, 2014. GlobalPost is featuring it again as one of our must-reads of 2014. By the end of the year, the Ebola outbreak in West Africa had infected at least 20,000 people, killing more than 7,800 of them.

NAIROBI, Kenya — Medical workers in Monrovia have noticed an unsettling disconnect: while evidence points to the accelerating spread of the deadly Ebola virus in West Africa, the number of bodies being collected is dwindling.

Every day the corpses of people who’ve died from the hemorrhagic disease are collected from treatment centers and hospitals around the Liberian capital. They are stored at the morgue, then taken to a crematorium for burning in the evening.

But the number of bodies being collected from beyond the medical facilities — of those who died at home — is falling.

“Very, very few of those dying in the community are being brought forward,” said Cokie van der Velde, a sanitation specialist with medical charity Doctors Without Borders (Médecins Sans Frontières or MSF), who organizes body collections in Monrovia.

Contact with the bodies of those who’ve died from Ebola is very risky. The illness is most contagious in its advanced stages, including after death. The world’s worst Ebola outbreak on record has now killed 4,033 people, the World Health Organization said Friday, 2,316 of them in Liberia.

Van der Velde said that in late September the main crematorium was running at full capacity, burning 80 bodies at a time on its mass pyre. In early October, the number of bodies has dropped to 30 or 40 a day. “That means they’re being kept hidden and buried in secret,” she said. Ebola deaths in rural areas are still more poorly documented than in cities.

Why would anyone hide contagious corpses or bury them secretly? For very good reasons, actually: to honor the deceased and see them through to the next world.

Such beliefs are not so alien: There are “good” deaths and “bad” deaths in every community, in every part of the world.

In Europe, for example, if you’re lucky you might die at home. Your relatives cry, then someone makes a phone call, an ambulance arrives, you’re zipped into a bag, put on a stretcher and carried away. The undertaker cleans you up. Your loved ones may or may not have contact with your body again, depending on religious or other traditions.

According to many West African traditional beliefs, as in the Christian and Muslim religious systems, burial is transition: “The funeral is travel” to a spirit world of ancestors, said anthropologist Almudena Marí Sáez, a postdoctoral fellow at Berlin’s Charité University Hospital. Marí Sáez, along with Matthias Borchert, has researched Ebola’s social impact in Guéckédou, Guinea, and in Sierra Leone.

In the Ebola-hit parts of West Africa, a “good death” is personal and tactile. You are wept upon, your corpse is clutched, kissed, hugged and not let go. You are washed clean by relatives and rubbed with palm oil and dressed in your favorite, or brand new, clothes. Then you rest at home and are finally buried close by, perhaps even in the yard outside the house.

The problem, of course, is that the rituals of saying goodbye to the dead in West Africa also encourage the spread of Ebola.

With Ebola there is no good death.

More from GlobalPost: 18 images that show just how hard it is to treat Ebola

Any human touch — a simple hug, holding hands — can spread the infection. With death the body’s “viral load” reaches its peak. There is nothing more contagious than the corpse of the recently deceased.

So there can be no traditional burial, the sort that ensures both your body and spirit are laid to rest and offers comfort to grieving relatives. The horror of Ebola is being compounded by the horror of bodies left in rooms, on roadsides or at faraway clinics and then buried or burned by strangers in strange places.

"Imagine losing 10 members of your family and no one giving you a hug," a CDC epidemiologist who worked in Sierra Leone recently told Story Corps.

But some would rather take the risk.

“To die of Ebola is one thing, but to be deprived of an afterlife is quite another,” said James Fairhead, an anthropology professor at Sussex university in the UK in a recent briefing paper on funeral rites and Ebola.

Fairhead focuses on the traditions of Kissi people, who live in parts of all three main Ebola-hit countries: Guinea, Liberia and Sierra Leone.

They believe “a properly conducted funeral helps the dead to relocate to the village of the dead where they live a similar life to those on earth and continue to participate in affairs on earth,” he said.

“What happens when you can’t bury people in a normal way, when you cannot mourn properly?” asked Marí Sáez.

Instead of a community coming together to mourn a loss, there are people in Hazmat suits who spray the dead with chlorine before bundling them and their clothes into a body bag.

The traditional proximity of graves to homes in Guinea, Liberia and Sierra Leone “shows how close the spirit world is,” said Marí Sáez. “You are never completely separate from the dead.” Only strangers and the cursed are buried outside the village.

Fairhead points out that isolation and the wrong kind of burial are not only considered disrespectful, but dangerous.

If the funeral is not conducted properly, the travel to the next world is considered incomplete. It’s then believed the spirit can remain, lost and wandering with the ability to curse those who failed in their social obligations.

“The Ebola crisis response has been conducted without an understanding of the detailed significance of how events around death and burial are critical to personal and community security,” said Fairhead. The result is resistance to the new enforced practices.

But anthropologists point out that pragmatism and flexibility are core elements of the traditions that bind communities in the countries ravaged by Ebola, as well. They say those traits could be better harnessed to improve the effectiveness of the response.

“People are extremely adaptive, especially in rural areas,” said Mariane Ferme, a professor at University of California, Berkeley, and author of the Sierra Leone ethnography “The Underneath of Things.”

If the medical experts and government authorities want buy-in from the people, they need to talk to them, not just issue orders, she said.

“There’s no way this top-down, isolation unit approach is going to work to really cut down transmission,” said Ferme. She said a “grassroots intervention” is needed but that international agencies are mostly unwilling to listen to affected communities.

“They seem to think the problem is proper messaging, telling people what they need to do, rather than going and sitting and listening to what they might come up with,” said Ferme.

Finding a way to respond to Ebola in ways that make sense and so are accepted locally will be key to halting its spread through communities. Stomping on traditional practices and beliefs while issuing decrees won’t stop dangerous funerals, hidden corpses or anything else.

“To arrive at a locally accepted solution you need to talk to the people,” said Annie Wilkinson, a researcher at the UK’s Institute of Development Studies.

More from GlobalPost: Most US nurses say their hospitals aren't prepared for Ebola