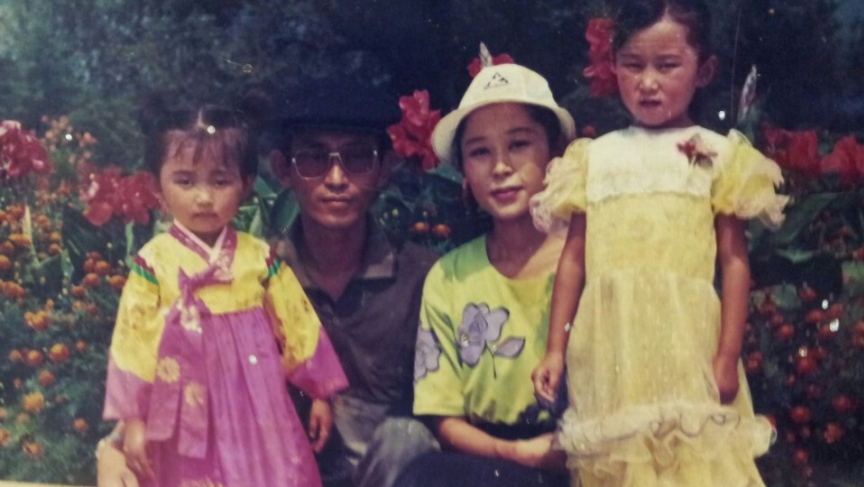 Yeonmi Park with her family in North Korea.

North Korean leader Kim Jong-Un has not been seen in public since Sept. 3, when he attended a concert with his wife. The lack of reliable information out of North Korea has led to rumors about the dictator's whereabouts.

But one defector says there is much too much focus on the country's leader — rather than its people.

"The media is focusing on the nuclear weapons, crazy dictator and Kim Jong-Un being a fat guy," says Yeonmi Park, a North Korean who risked her life to leave the country. "It's so funny to the Westerners — and that's it. But most of time we are forgetting about the people who are dying in that country."

Yeonmi's father was a mid-ranking civil servant who tried to make ends meet by selling gold and silver across the border in China. He was eventually arrested and sentenced to 17 years in jail.

He returned to his family after serving a partial sentence, and that's when they decided to flee North Korea.

Yeonmi and her mother escaped in 2007, sneaking across three mountains and a frozen lake to get to China. Her father stayed behind in order to minimize the risk of the whole family being arrested.

The two women made it out of the Hermit Kingdom, but things didn't get any better once they did. A smuggler threatened to report Yeonmi and her mother unless Yeonmi slept with him — her mother offered her own body instead.

It's a memory Yeonmi still struggles with. "That was my first day out of North Korea and at that time, I didn't know what sex means," she says. "I was so helpless at the time and I couldn't believe people can be so cruel to us. People just seemed like I deserved it because I was from North Korea."

Her father joined them in China a short time later, but his freedom didn't last long: He died soon thereafter.

Things eventually start to turn around, if slowly. Yeonmi and her mother managed to get to Mongolia and then on to South Korea. That's where Yeonmi lives now, studying and teaching herself English by watching and re-watching DVDs of the American show "Friends."

She says the comments from her new countrymen often surprise her. "The first words I heard usually from people is like 'You just look like me,'" she says. "'You just look like us.' And I was shocked, but I'm so happy they are telling me that because not that many media is showing us as a human."

But Yeonmi says she hasn't forgotten about the people she left behind. She keeps in touch with her family and friends by phone; she says they can make international calls by getting close to the border to China, where their phones can pick up Chinese signals.

Doing that puts both them and Yeonmi at risk, but it's a risk they are willing to take to stay connected.

Despite the nightmares she's survived, Yeonmi wants to keep telling the world her story and the stories of many others like her. And she hopes to one day go back to a free North Korea.

Read more about Yeonmi Park and her story here.