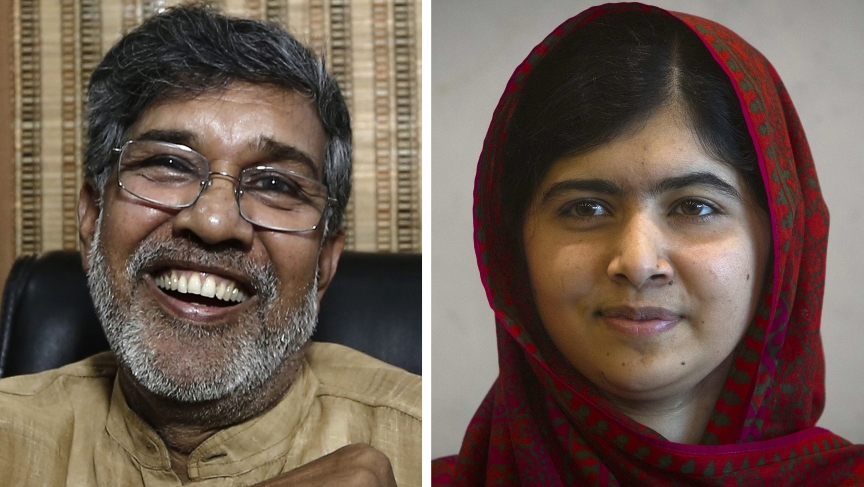 Malala Yousafzai, right, who was shot in the head by the Taliban in 2012 for advocating girls' rights to education, and Kailash Satyarthi won the 2014 Nobel Peace Prize on Friday.

It was heartening, if not a huge surprise, to hear that Malala Yousafzai was awarded the Nobel Peace Prize on Friday.

For the 17-year-old Pakistani girl, Thursday marked two years since she was shot by the Taliban. Since then, Malala has become a tireless, high-profile campaigner for women's education around the world, and is now the youngest-ever Nobel laureate.

But what might be even more surprising was that she shares this year's award with an activist from India with a far lower profile.

Even Malala today hinted at her lack of knowledge about him during a press conference on Friday. “I would like to share with you that I had a phone call with Kailash,” she said. “I cannot pronounce his surname correctly, so I will just call him Kailash and hope he doesn’t mind."

Her co-winner, Kailash Satyarthis, has spent his life fighting child labor in India. He founded the the Save the Childhood Movement — or Bachpan Bachao Andolan — which aims to eradicate child labor around the country.

“He’s brought a lot of media attention to the issue of child labor in India because of the kind of very flashy raids that he and his team have conducted along with the police forces here in India,” says Delhi-based journalist Megha Bahree, who has investigated child labor all over the country.

One of the more famous raids was conducted in 2007 on a subcontractor in New Delhi that was making clothing for Gap, the huge American retailer.

“There were kids as young as 10 years old doing embroidery on clothes," Bahree says, "which is pretty ironic — kids making clothes for Gap Kids, working for 14 and 15 hours a day."

That raid may have garnered plenty of media attention, but Satyarthis himself has mainly stayed out of the spotlight, even in his own country. The Times of India's website ran a headline on Friday expressing the thoughts of many people around the world: “Who is Kailash Satyarthis?”

“In fact, I think there was a blog post today on one of the Indian news sites that his organizations, BBA — [that] their website crashed because everyone was Googling to see who is Kailash Satyarthis and what is Bachpan Bachao Andolan?” Bahree says.

BBA isn’t without its critics; Bahree herself has witnessed and written about questionable practices by the NGO.

But she's also witnessed terrible scenes from the world of child labor in India. She recalls visiting a slum across from the Delhi stock exchange. The slum is a maze of narrow alleys with tiny rooms on either side, stacked one on top of another three stories high.

“There were a lot of these rooms that I went by where there were little kids — five, seven, 10 kids crammed into one room — and they were sticking pieces of mirror, pieces of glass on say, a pen holder or on a pen or on a photo frame," Bahree says. "These are the kinds of things that we see in home stores in the US all the time."

In one room that Bahree visited, the youngest child was 5 years old, his teeth already stained by nicotine.

“This is what they do day in and day out for 12 and 14 hours at a stretch. They start [using] nicotine, they start sniffing glue and you could see that on their faces,” said Bahree. “And it was miserable, it was just miserable and this is happening right in the heart of the capital.”

But child labor isn't a big issue in life of the average Indian, Bahree says, given the scale of poverty in the country.

“Poverty is such an everyday part of our lives over here," she says. "It’s not to say that Indians are okay with child labor, I don’t think they are blessing the situation. But it’s only when there is a flashy, splashy news raid or a police raid which show the really troubled situation that these kids are living in that the average Indian wakes up and says ‘Hey, that’s not a good thing.'"