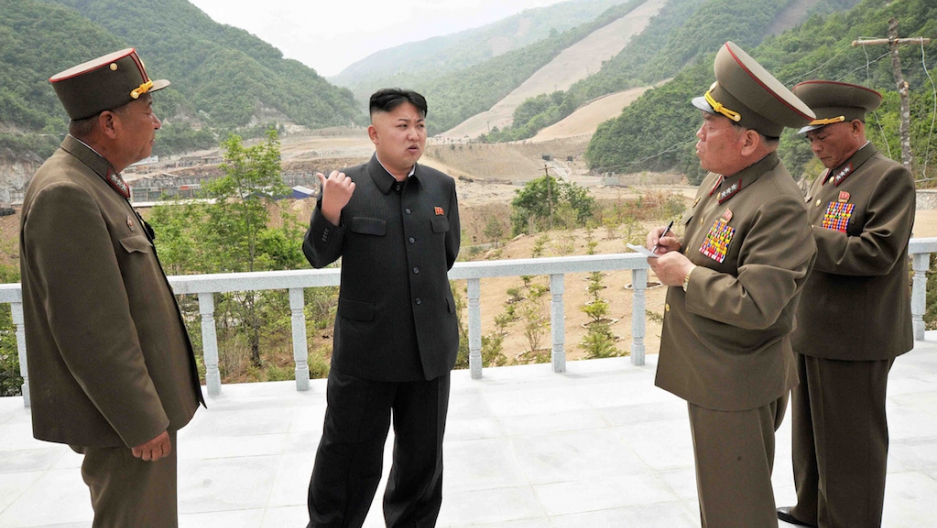 Kim Jong Un visits his new ski area last year. He hasn't been seen in more than a month. Is he... vacationing? Under arrest? Or simply playing a trick on his foes?
Credit: KCNA VIA KNS
Share

FRESNO, California — The formerly tiny band of journalists and academics who specialize in North Korea has expanded dramatically in numbers over the past several years. Watching this has been a cause for rejoicing.

The pendulum may have swung a bit too far, though, judging from the current mad rush by what has become a veritable horde of Pyongyang watchers to put forth theories about the meaning of Kim Jong Un’s mysterious month-long absence from the public eye.

On the basis of scanty evidence we’re hearing theories that:

Obvously what the waiting world really needs is another theory explaining why Kim — even as state media continued to report such activities as sending or receiving greetings or tribute — halted his usual schedule of public appearances. After all, as the wheelchair-bound US President Franklin D. Roosevelt, a polio victim, proved, even an indisposed leader may be able to prop himself up behind a desk for a reassuring photo.

Here's a theory to try on: Kim and his colleagues are playing a mind game with us, similar to a macabre hoax perpetrated in his grandfather's time.

In 1986 North Korean loudspeakers at the Demilitarized Zone, the border with South Korea, broadcast that President Kim Il Sung had been killed. North Korean students in China removed the lapel portrait pins with which they had demonstrated loyalty to the Great Leader.

One theory on that incident is that it was a head fake done for the purpose of gauging how neighboring countries and the United States would respond to the eventual death of Kim Il Sung.

South Korea publicly announced Kim’s reported death and placed its military on alert. The loudspeaker announcements ceased, the students put their pins back on and Kim, who was 74 at the time and very much alive, made a public appearance — hugely embarrassing the South’s government.

Kim lived for eight more years. No explanation ever came from the regime.

A similar reason might be behind encouraging the world to wonder this time what, if anything, has happened to the 31-year-old Kim Jong Un — especially if the “discomfort” that the country’s official news media mentioned he’d been suffering was an illness serious enough to decrease life expectancy.

If so, the regime no doubt wanted to know whether China on the one hand, and the US and maybe South Korea on the other, would get together to plan a coordinated response to a regime change or collapse.

There’s no report that they’ve done so. Although American strategic thinkers have argued for some time that such joint planning is urgently needed, the Chinese haven’t cared to go that far in distancing themselves from their delinquent ward.

But there could have been another reason for the North Koreans — perhaps taking their cue from a real (if not life-threatening) illness or minor injury that took Kim out of commission for a while — to play up the drama.

World events, most notably in Ukraine and the Middle East, had taken the news focus away from perennial bad boy North Korea. That couldn’t be permitted to continue, or the regime would be hard pressed to stick with its M.O. of extorting concessions from enemies.

But what could Pyongyang do to regain the spotlight?

After all, the North’s rulers knew that the timing in terms of relations with protector China was by no means propitious for, say, a fourth nuclear test, what with Beijing still steaming over the third one.

Circumstantial evidence seems consistent with the idea that the North’s vagueness about Kim’s absence could amount largely to a publicity stunt, in the category of confusing the enemy with inconsistency.

Yes, a surprise trip by Kim’s chief deputies to South Korea for the closing ceremony of the Asian Games had a domestic political function. It was a means of further associating the regime, in the eyes of the public back home, with the remarkable achievements of the North Korean athletes.

But in the context of the North’s relations with the South, the trip was also an opportunity to launch a new round of confusing diplomatic and military behavior. A pleasant luncheon meeting with South Korean officials that resulted in an announcement that more formal talks would be held later was followed by — what else? — military confrontations, along the disputed sea border.

Long-time Asia correspondent Bradley K. Martin, the author of “Under the Loving Care of the Fatherly Leader: North Korea and the Kim Dynasty,” currently holds the Roger Tatarian Lecturership in Journalism at Fresno State University.