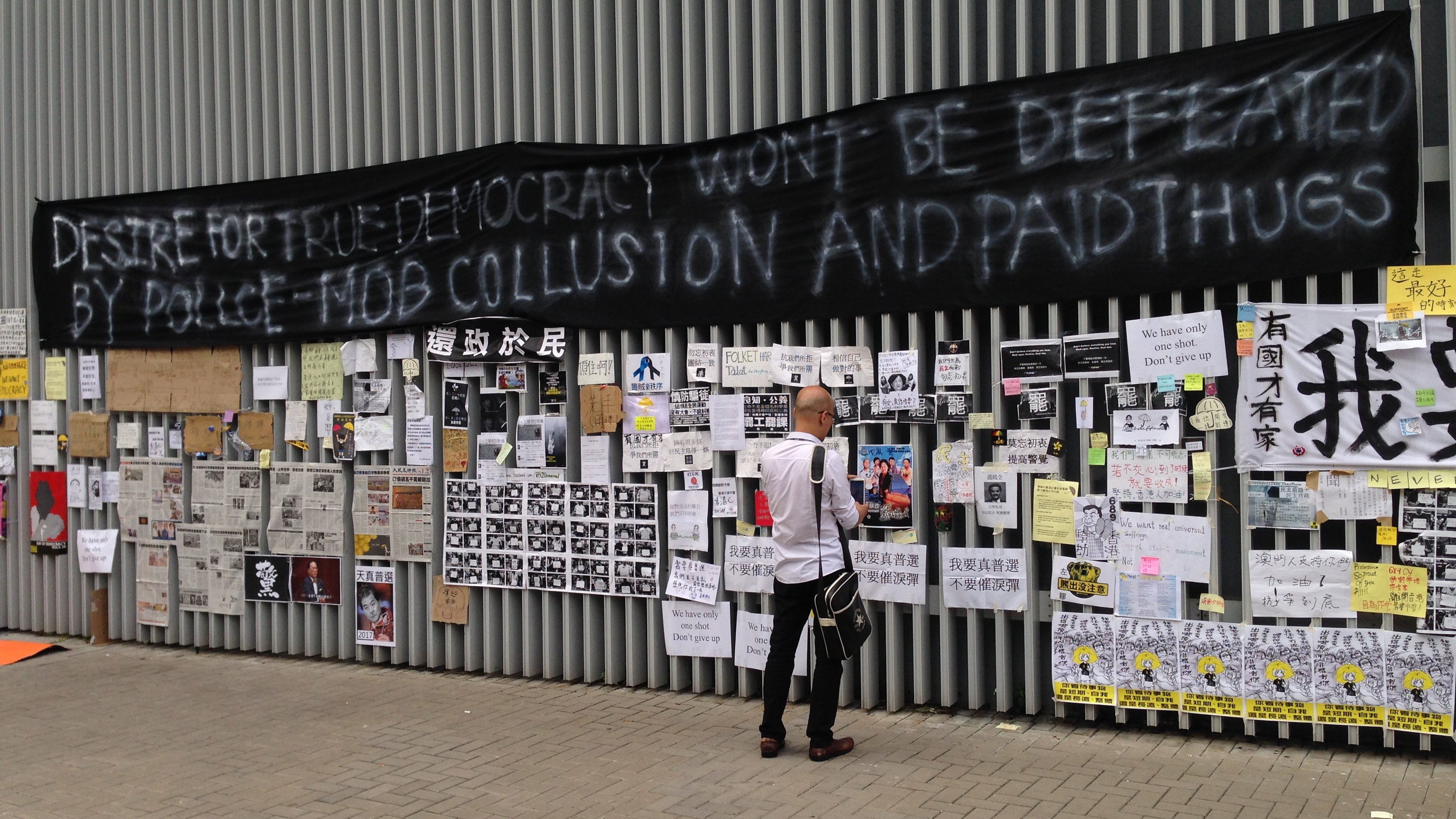 Many protesters say their pro-democracy campaign is neither a revolution nor about "defeating" Beijing. But for Hong Kongers, issues of national identity and their relationship with China are still complicated.

After a lull in demonstrations over the past week, it's back to the streets for protesters in Hong Kong.

Planned negotiations between protest leaders and Hong Kong government officials on Friday were canceled. Demonstrators responded with another show of strength, bringing large crowds back into several protest zones around the city.

The protesters say the fight for democracy will go on, but there is another struggle wrapped up in all the politics: the question of Hong Kong’s national identity.

That's on display in the auditorium of Lee Kau Yan Memorial School, where middle school students in white and maroon uniforms line up in rows as two boys march forward to raise the red banner of the People’s Republic of China. The Chinese national anthem plays on a sound system and the kids stand at polite, if not reverential, attention.

But with feelings of Hong Kong pride running so high, it became clear that some of Lai’s students had problems with the annual ritual. Some were apparently ready to close their eyes or even turn their backs on the Chinese flag.

Lai’s own message to the students was straightforward. “Like it or not, well, you are Chinese. And the future of China is in your hands.”

Yet he also saw it as a learning opportunity, and asked students from either side of the debate to come on stage and share their positions. “One boy, one girl. And they won applause from the their fellow students,” Lai says. “That’s great.” 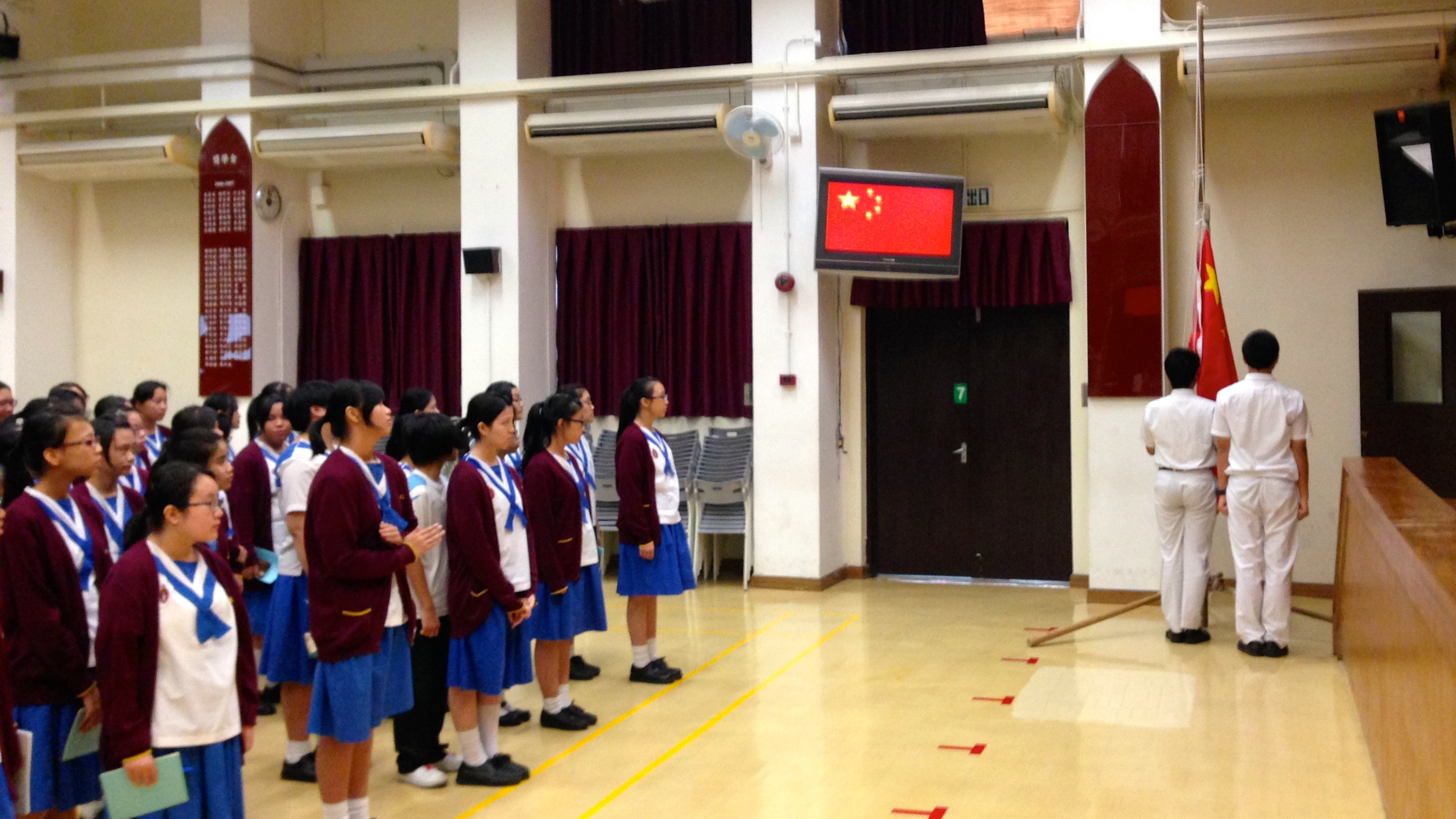 But when news of the open discussion and student survey wound up in the newspapers, Lai said he got a flood of critical emails and phone calls. People from the pro-China side of the political spectrum were not happy.

But many Hong Kong people think of themselves first and foremost as Hong Kongers, not Chinese. And according to a June poll, that trend is growing. About two-thirds of those surveyed in a Hong Kong University poll mentioned their identity as Hong Kong people before they identified as Chinese.

“It’s a huge difference about the core value between the Western and Eastern,” says James Lee, a marketing professional. “I think [in] Hong Kong, we digest a lot of western culture.”

Lee lives and works in mainland China, but he grew up in Hong Kong and thinks the territory’s British history is what makes it unique. And that’s a good thing. Lee says Hong Kong has more freedom and more democratic rights — and he worries that those things are under threat.

“The central government from Beijing, they try to put their system on the Hong Kong people. I think that is wrong,” Lee said. “We come from different systems. Even I live in China, it doesn’t mean I agree with the system there.”

Some Hong Kongers resent the growing presence and influence of people from the Chinese mainland for a host of reasons. For a long time, the former British colony was immensely more prosperous than other Chinese cities. There is intense competition for resources like apartments, jobs, and hospital beds.

Then there is simple prejudice. Some Hong Kongers just look down on their mainland compatriots as uncouth and irritating.

But a lot of the people I’ve been speaking with here are confident that Hong Kong’s uniqueness within China will survive. Amy Chan, a 55-year-old homemaker, actually supports the protesters more than her 21-year-old daughter, who just works all the time.

“We are part of China. That’s a fact,” Chan says. “China is more authoritarian, but at least it’s changing. And I’m confident Hong Kong will be OK.”