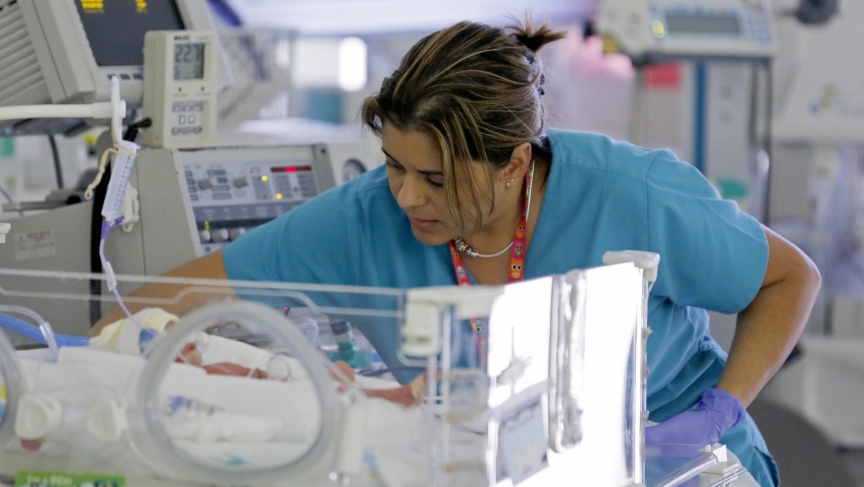 A nurse attends to an infant in the neonatal intensive care unit of the Holtz Children's Hospital at Jackson Memorial Hospital in Miami.

The United States spends more money on healthcare than any other nation in the world, yet America also has one of the highest rates of infant deaths.

So what's the reason?

“It’s the period after a month of life — a month to 12 months — where the US is really doing worse,” says Emily Oster, an economist who helped calculate these figures. “Much of the death rate in that period is not really about medical interventions, it’s about things that are happening in the home.”

And in low-income homes, says Oster, a visiting associate professor of economics at Brown University, there's a lack of support and resources that may be leading to a high number of deaths among babies. While there are other factors, including questions about how the US calculates infant mortality, she says this is the biggest problem.

Oster says medical interventions for premature babies, like neo-natal intensive care, seem to be working in the United States regardless of income level. The problems that contribute to infant mortality arise after children leave the hospital.

“We see this reflected in higher death rates throughout childhood in these populations,” she says. “This is not ending [when babies are a year old], though that’s a particularly vulnerable time. If you look at death rates for 2-year-olds or 5-year-olds, you see the same kind of thing. It does suggest that we’re failing these populations in some way.”

To correct the alarming problem of American infant mortality, Oster says that health officials are now considering a variety of remedies, including targeted support for low-income women that are giving birth.

One model being considered is similar to what many European nation’s already employ: maternity nurses who visit homes to check in on infants and parents.

“These kinds of projects are very common in Europe, and we don’t have as much of it in the US,” says Oster. “I think people have thought of [these strategies] as a possible way to combat some of these issues."