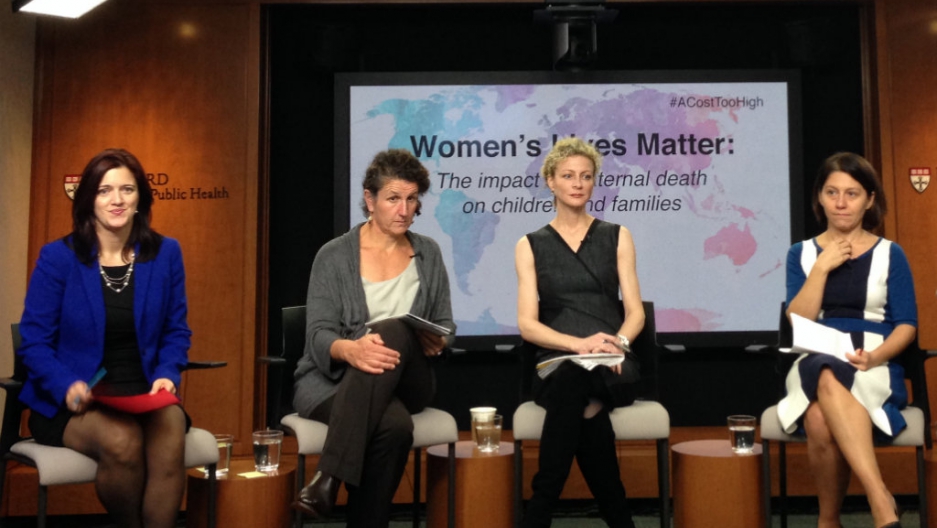 The four panelists (from left) at an Oct. 7 webcast on the impact of maternal health on children, families and communities: Amy Boldosser-Boesch, interim president and CEO of Family Care International; Jeni Klugman, senior adviser at The World Bank Group and fellow at Harvard Kennedy School; Alicia Yamin, lecturer on Global Health and Population at the Harvard School of Public Health and policy director of the FXB Center for Health and Human Rights at Harvard University; and Aslihan Kes, economist and gender specialist at the International Center for Research on Women.
Credit: Jessica Mendoza
Share

BOSTON – The world could be a lot less safe for mothers after 2015. As the deadline for the UN Millennium Development Goals (MDGs) approaches, advocates for maternal health say the issue is in danger of fading in future models of sustainability.

“There’s a real concern that the more targeted, focused goals [for maternal health] will be absorbed into broader objectives, and that they will then disappear,” said Martha Murdock, vice president for regional programs at Family Care International (FCI), a New York-based nonprofit that works for safer pregnancy and childbirth worldwide.

That concern set the tone for an Oct. 7 strategy meeting and later a panel webcast of women’s and maternal health advocates, researchers and implementers at the FXB Center for Health and Human Rights at Harvard University in Boston.

In working to drive support for maternal health, the group highlighted the impact of a mother’s death on her children and household – especially in developing countries, where about 800 women die every day from preventable causes related to pregnancy and childbirth. A woman’s life absolutely holds inherent value, the panelists said, but donors, policymakers and the public also need to understand that life's huge socio-economic worth in order for it to become a priority in the global health agenda.

“The death of a mother is a tragedy in and of itself, but it goes beyond that,” said Ana Langer, panel moderator and director of the Maternal Health Task Force and the Women and Health Initiative at the Harvard School of Public Health.

Two new studies presented at both the meeting and the webcast stressed the crucial role that mothers play in society.

The first, a four-country qualitative study led by FXB Center policy director Alicia Yamin, looked at the effects of maternal death on children and families. Though the numbers and situations varied across Ethiopia, Tanzania, South Africa and Malawi, the overall impact for children in particular was consistently negative and often dramatic, Yamin said.

The second study, conducted in Kenya, approached the issue from an economic and human rights perspective: What is the cost of a mother’s death in pregnancy or childbirth, and who suffers most from it?

“Women have multiple productive and reproductive roles in the household,” said Aslihan Kes, who led the study and is an economist and gender specialist at the International Center for Research on Women (ICRW). “When the woman dies, multiple household members have to step in.”

Children – particularly girls – tend to take on their mother’s role at the expense of their education, Kes said. This in turn leads to a lack of ability to delay pregnancy and early marriage, she added. Interviews with family members also found that fathers were inclined to leave the family after the mother’s death, and any children they took with them tended to be male.

Both studies underscored gender disparity issues at the core of the conversation about women’s and maternal health. Women are so central to the household in developing societies that their loss devastates that basic economic unit, Harvard’s Yamin said. Yet the panelists collectively noted that the systems in place for maternal care are dysfunctional and lead again and again to preventable deaths.

“Women lack voice and agency and their lives are not valued,” Yamin said.

It is this reality that led to a broader question of policy: “Will the new development framework actually continue to reflect priority on these issues?” FCI’s Murdock said.

The original UN MDGs, developed in 2000, set eight objectives for poverty, education and global health for the next 15 years. MDG 5, "Improve maternal health," gave donors and policymakers a clear mandate regarding the wellbeing of mothers: Reduce maternal mortality by three-quarters between 1990 and 2015, and achieve universal access to reproductive health.

The new framework reaffirms a commitment to improve the health of women and children and provide access to reproductive health. But it is less precise about action and objectives – the advocates’ main concern.

“Maternal mortality as a preventable death has far-reaching impacts,” ICRW’s Kes said. The hope is that the international community begins to understand that impact so that it is reflected concretely on the global agenda, the panelists said.

“If we could make donors at a global level understand the need for change in gender norms and social norms,” Yamin said, “that would be very helpful.”