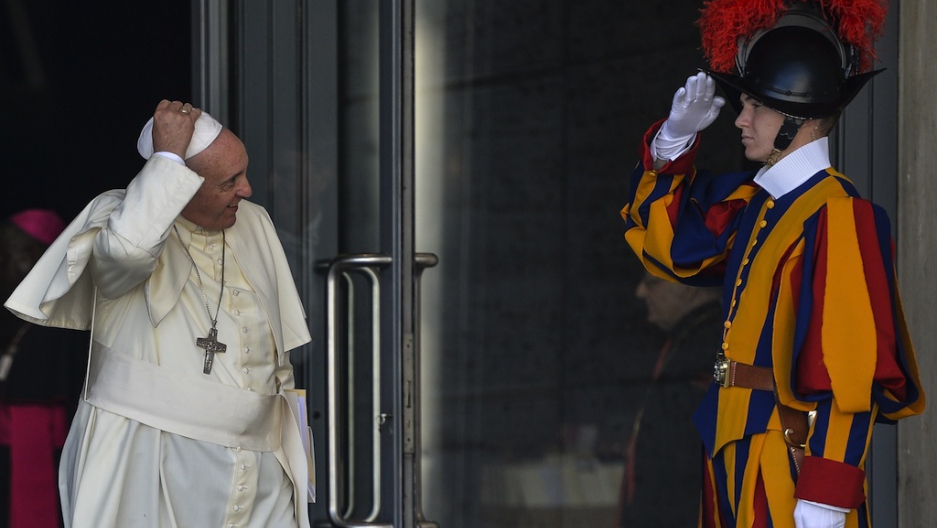 Pope Francis holds his skullcap in front of a Swiss guard as he leaves at the end of the morning session of the Synod on the Family, at the Vatican, on October 6, 2014. The meeting of nearly 200 bishops from around the world is addressing the huge gulf between church teachings on moral issues and what believers actually do.
Credit: Andreas Solaro
Share

In 2002, on a sunny fall day in Rome, I asked a canon lawyer why the Vatican derailed a 1989 request by American bishops for a free hand to defrock sex abusers. Only the pope held that power — if bishops had more flexibility to dismiss abusers it might have preempted scandals to come.

The priest told me that US diocesan tribunals “violated grandly – terribly – the annulments of marriage.” What, I asked, did marriage annulments have to do with pedophilia?

“Laxity on annulments,” he fumed, showed an “antinomian mentality” – against moral law. Too many annulments let people freely remarry, weakening church law. Thus, Rome would give no ground on sex abusers, the logic went.

An earthquake has happened since then. Pope Benedict improved the procedure for laicizing sex abusers. But the Vatican moved so slowly, failing to confront complicit bishops, that the scandals took a huge toll on church moral authority – the issue that drew the ire of that canon lawyer.

Many divorced Catholics now remarry without annulments. No studies pinpoint how many take communion despite church prohibition but “antinomian” dynamics are a flashpoint issue at the synod, or international bishops’ gathering, that opened Sunday at the Vatican.

Most synods are boring. This one, on family issues, has at least two potent story lines: Pope Francis’s agenda of “radical mercy” for a changing church, and his shakeup of old-guard figures in the Roman Curia.

Francis positioned this synod and its 2015 sequel to discuss issues that traditionalist cardinals, bishops and theologians deem closed with an obey-or-leave mindset. Reform groups from many countries are now in Rome, blogging and holding news conferences in a conference milieu on how the church should change.

“Having been to two synods, I find this one a far-and-away more open process, with Francis in his welcoming sermon saying ‘let’s talk frankly,’” Sister Christine Schenk, a founder of FutureChurch, which has representatives in Rome, said by phone from Cleveland.

In 2013 the Vatican sent a long questionnaire to dioceses the world over, seeking Catholics’ responses on varied issues like unmarried couples, gay couples, children raised in “irregular homes” at Catholic schools and teenage mothers as well as how to minister to people who fall outside of canon law for whatever reason, especially poor people, seeking solace at church.

“In North America, people often think that the church is no longer a reliable moral guide, primarily in issues related to the family,” noted Cardinal Lorenzo Baldisseri in a lengthy report that synthesized the questionnaire findings.

Bishops pulled out the stops in trying to halt gay marriage, which is now legal in many countries. Will pastors deny gay couples communion?

“It troubles me that we have 200 men — bishops — who are not married, or had a spouse, or raised children, as the majority on this,” said Sister Schenk. “It’s great that married couples are participating at the synod, being forthright. But how can we have a synod on family when the decision makers have no experience in raising a family or being in a committed sexual union? That part seems surreal.”

“The idea of an original church of love that is supposed to have become later a church of law cannot be substantiated,” Kasper wrote in America, the Jesuit magazine.

“God bends down in order to raise us up; to comfort us and to heal our wounds; and to give us a new chance, to bestow on us new life and new hope. And who would be so self-righteous as to think that he would not need such mercy?”

“I find it amazing that the cardinal claims to speak for the pope,” Burke said in a Sept. 30 conference call with reporters. A former St. Louis archbishop, Burke is a canon lawyer in charge of the Apostolic Signatura, or Vatican Supreme Court.

“The pope doesn’t have laryngitis,” he said, according to Religion News Service. “The pope is not mute. He can speak for himself.”

Burke held great favor with Benedict and is no friend of antinomians. He has said that pro-choice, Catholic elected officials should be denied communion. He is also something of a legend for his elegant attire and regal presence in processions at events, particularly for orthodox groups.

Francis, who last year said “the court is the leprosy of the papacy” in a sign of disapproval of ostentatious pomp, removed Burke from an advisory position at Congregation for Bishops, the Vatican department that selects priests to become bishops.

“And so, as happens in every self-respecting revolution, the heads continue to roll for churchmen seen as deserving this metaphorical guillotine, “ L’espresso religion correspondent Sandro Magister announced in a widely-read Sept. 17 post. “An even more eminent decapitation seems to be on the way.”

Magister predicted that Burke would removed as prefect of the Signatura and “demoted to the pompous — but ecclesiastically very modest — title of ‘cardinal patron’ of the Sovereign Military Order of Malta.”

His metaphorical decapitation has not happened, though speculation in Rome is rampant that a decision will be announced after the synod.

The Order of Malta is a chivalric organization of wealthy Catholics who fund an array of charitable causes. Magister, a veteran Vatican correspondent, is quite conservative with a reputation for deep sources. If he’s wrong, the egg on Magister’s face will stick for years.

As Catholic blogs hummed with the presumed news of a stronger sign of Francis’s resolve in shaking up the Curia, Burke found a defender.

Peter Borré, a retired Boston oil executive, has spent years helping parishes closed by bishops in financially pinched dioceses to file appeals, trying to stay open. In the last two decades, a Catholic parish has been closed in America at an average pace of once a week.

Borré organized Council of Parishes, a group that supported 24/7 vigils of parishioners in several states with people literally sleeping in pews. St. Frances Cabrini Parish in Scituate, Mass. is in the tenth year of a round-the-clock vigil, having broken away from the Boston archdiocese.

Of those he has spearheaded, three of 18 appeals to the Signatura seeking to reverse bishops' closure decrees of churches have been upheld, giving parishioners relief under Burke.

“Over the past two years as Signatura prefect,” Borré said, “Cardinal Burke has sent clear messages through his canonical decrees on how to handle — and not mishandle — these church parishes, the hundreds of ‘stranded’ churches that remain in name only Catholic worship sites.”

Burke issued decrees with standards “for conserving and safeguarding the sacred building,” says Borré, whose group has endured frustrating waits in the Vatican appeals process. The hard-shell American cardinal took seriously the idea of parishes as a “juridic person” under canon law.

“He has done this by laying out an explicit list of steps to be taken before deconsecrating the church,” Borré states. “Somebody in Rome gives more than lip service to the notion that the Church Universal is not in irreversible decline, but capable of self-renewal.”

Cardinal Baldisseri’s long report summarizing the findings of the pre-synod questionnaire explains that the vast majority of Catholics ignore the 1968 encyclical, “Humanae Vitae,” which condemns all forms of artificial contraception. Pope Paul was pushed by conservative cardinals, notably the theologian Alfredo Ottaviani, to renounce the opinion of his lay advisory board that recommended acceptance of the birth control pill.

The response to the 1968 papal letter among Catholics in Western countries was so negative that for the last decade of his life, Paul VI issued no other encyclical. However, he steered the Second Vatican Council to a conclusion with documents calling for a more flexible, open church.

Perhaps as a sign of even-handedness to church conservatives, Pope Francis on Oct. 19 will beatify Pope Paul VI, the final step before sainthood, on the closing day of the synod.

Jason Berry, a GroundTruth correspondent, was co-producer of the recent FRONTLINE documentary “Secrets of the Vatican,” and is author of "Render unto Rome: The Secret Life of Money in the Catholic Church."