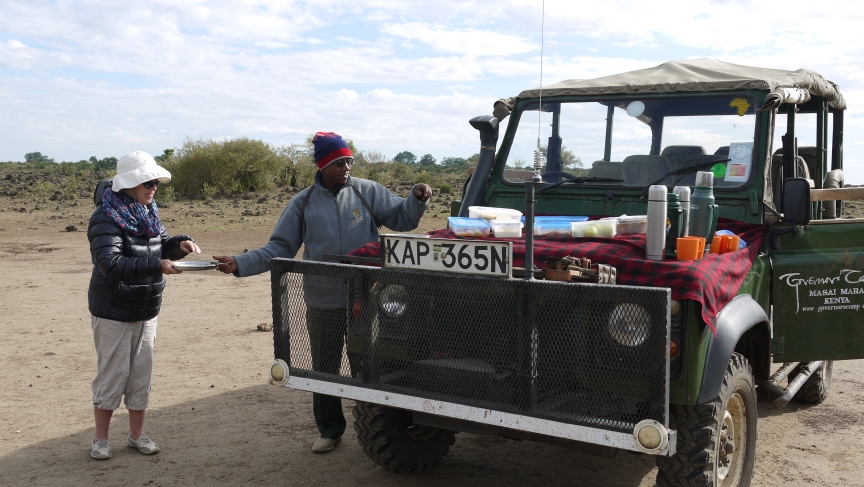 John Karanjah helps a guest with a picnic breakfast after a Safari ride.  Karanjah is worried that fears of Ebola in Kenya will keep tourists away and he will lose his job.

David Francombe has been fielding a lot of questions about Ebola recently — some of them kind of bizarre.

For instance, cocoa comes from West Africa, so one person asked: “Can we catch Ebola from cocoa?" Even Francombe can't quite fathom it. “I mean, unbelievable questions,” he says.

Yet Francombe isn’t a doctor, nor is he employed by the World Health Organization: He manages a safari camp in Kenya’s Masai Mara National Reserve.

Kenya is among the vast majority of African countries that haven't registered even one case of Ebola. But it’s still feeling the impact of the outbreak more than 3,000 miles away.

The perception is that Ebola is in Africa, so Africa has Ebola. That leap of logic is hitting Kenya’s critical tourism economy hard. The Kenya Tourism Federation is reporting a 15 to 20 percent drop in arrivals since the Ebola outbreak was first reported.

Francombe says business was just starting to pick up again after last year’s terrorist attack on the Westgate Mall in Nairobi. Asian tourists were making inroads in Africa, booking big groups of up to 50 people at a time, he says. Then Ebola happened.

Korean Airlines responded by stopping its flights to Nairobi. “All our Chinese bookings, Japanese, Koreans, that all dried up,” Francombe says. “It’s had a massive effect. We had big, big cancellations.”

His company already closed one safari camp, and they’re looking at closing a second this month. That means they’ll have to lay off staff members like John Karanjah, a driver and guide who works for the camp. He’s devoted four years to this job — investing in school, books and binoculars — and knows the name of every lion on the Mara.

If the tourists stop coming because of Ebola, he knows what will happen. “I’ll end up being jobless,” he says.

Caleb Mayio, a waiter at the camp, has a wife and four children in one of the villages not too far away. He needs this job, too. “I'm lucky I have a job here,” he says. “There are no other jobs in our village.”

Not all of the tourists are staying away, though. Roy Liebman and his wife, Louise Heikes, flew in from New York — though not without some qualms. “We may have been foolish,” he says. But they’ve been planning this trip for a year.

Liebman says when the couple made their plans, he was a little worried about terrorism. But his colleagues back at work had more anxiety about the virus. “I’m certain when I get back to my office, nobody’s going to want to touch me for at least three weeks," he says.

That day seems pretty far off, though, as Liebman and Heikes sip tea while a pod of hippos basks in the river flowing by. Liebman says they feel pretty relaxed and safe now that they’re back from their safari drive — “as safe as you could be, being seven feet away from some huge lion.”

And that’s the type of safety concern Kenya’s tourism industry would like to get back to worrying about.