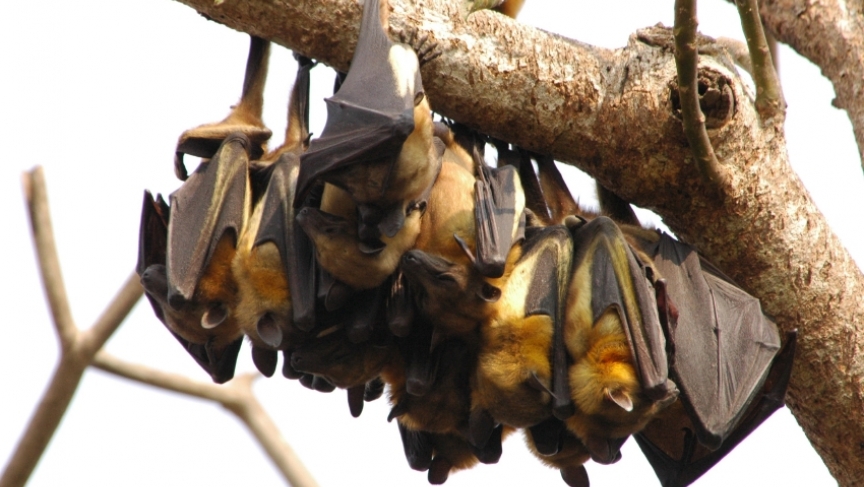 Fruit bats like the ones pictured here are often key vectors for diseases like Ebola, and disturbing their habitats may have made humans more vulnerable.

If you're sick, you might well have an animal to blame.

Scientists say that more than six out of 10 infectious diseases in humans were transmitted from animals. And that transmission, or "disease spillover," gets worse the more humans alter the environment and disturb animal populations — like, say, when they cut down trees that house Ebola-carrying fruit bats.

“The situation in West Africa is that there has been intensive deforestation,” says Jonathan Epstein, a veterinarian and epidemiologist with EcoHealth Alliance, a New York-based conservation group  “With deforestation, there’s more exposure between people and wildlife, more opportunity for contact.”

West Africa has seen a steep increase in logging in recent years. Guinea’s rainforests alone have been reduced by 80 percent; Liberia has sold rights to more than half of its forests for logging, mining and industrial agriculture. Sierra Leone is on track to be completely deforested in the near future.

Epstein says that large-scale logging has created easy transport routes in and out of the forests. "As a by-product of many logging activities, there are also improved road systems that connect what were once remote, forested habitats to urban center," he explains. "One of the things we’ve seen for the first time in this outbreak is the spread of Ebola into an urban center. This is certainly what happened as cases moved from the Guéckédou region of Guinea, into Conakry, the capital. That hadn’t happened before.”

Another risk comes from bush meat, like those fruit bats, which is caught, killed and butchered in rural areas and then transported and sold in cities. Handling an uncooked bat with a zoonotic disease — diseases that can jump between animals and humans — can create an epidemic as human-to-human contact becomes the primary risk.

“Bringing wildlife into urban markets, in and of itself, could be a risk factor for disease spillover,” Epstein says. “That’s exactly what happened in southern China [with Severe Acute Respiratory Syndrome] as bats were brought into urban markets in southern China and SARS coronavirus spread between bats and other animals and eventually into people.”

Problems can even arise when a forest is converted to agricultural land, allowing the disease to jump between animals as well as from animal to human. Epstein has seen that happen in Asia while studying the Nipah virus.

"It was first discovered in Malaysia where areas were converted to large-scale pig farms that were abutting pristine, forested areas," he says. On these farms were fruit orchards that attracted fruit bats and there was incidental exposure between bats and pigs. Pigs had an opportunity to be exposed to droppings from bats ... and become infected with this virus that ultimately also infected people and caused a fatal central nervous system disease.”