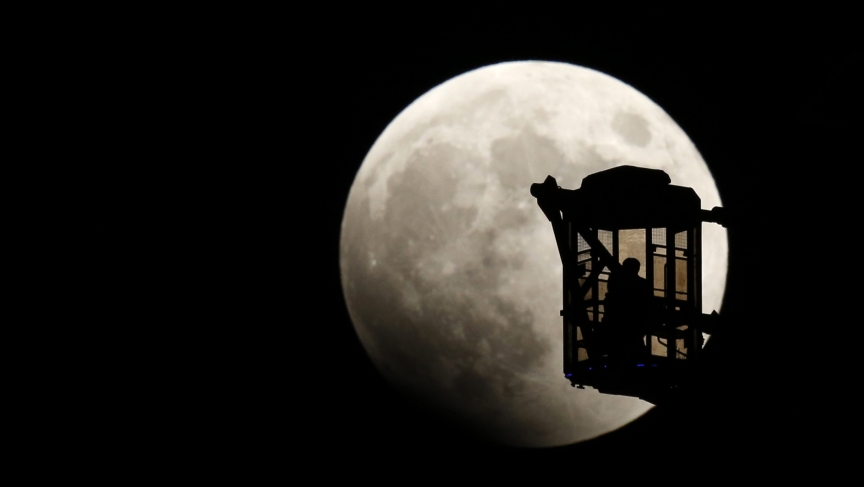 A man and a woman look at the moon as they ride a Ferris wheel, as a total lunar eclipse begins in Tokyo October 8, 2014. The eclipse is also known as a "blood moon" due to the coppery, reddish color the moon takes as it passes into Earth's shadow.

October features not one, but two eclipses this year — and the first one was this morning.

The total lunar eclipse occurred at a unique time for Americans — as the sun rose.

Dean Regas, Outreach Astronomer for the Cincinnati Observatory, says seeing a lunar eclipse in the morning is “just magical.” “You see the shadow of the Earth starting to go across the surface of the full moon and the moon turns these eerie shades of color — and every minute it changes.”

And if you were really lucky and had a clear view of both the eastern and western horizons, you may have seen something rare: the “totality” of the eclipsed moon at the same time as the sunrise. “Totality” is the period during which the Earth’s shadow completely covers the moon. It occurred from 6:25 to 7:24 a.m. ET. The eclipse ended at 8:34 a.m.

The eclipse also coincides with volcanic activity here on Earth, which may make it look different from past eclipses. During a lunar eclipse, sunlight is refracted through the Earth's atmosphere. Volcanic eruptions add additional material to the atmosphere, which will affect what kind of light reaches the moon. If there is volcanic activity at the time, it could turn the moon darker — and because it will already be so low in the sky, we could see a really dark red moon, Regas says.

Getting a good view of the partial solar eclipse that occurs October 23 won’t be quite so easy. It will require being in the right place at the right time, Regas says. “It's going to happen right around 5:45 or 6:00 ET, right at sunset. The moon will slide right in front of the sun and take a bite out of it. It will a look like a piece is missing out of the sun.”

You must take precautions if you want to get a good look at a partial solar eclipse, Regas says. As our mothers always taught us, you can’t look right at the sun.

One time-honored way to view a partial solar eclipse is to put a pinhole in a piece of paper and let the sunlight come through to project onto another piece of paper. You will be able to see the shape of the eclipse on the second piece of paper.

Even better, Regas says, is to use a pair of binoculars. As with the pinhole, let the light come through the binoculars and project onto a board, and you will be able to see the shape of the sun. You may even see some sunspots, Regas says, if there are some large ones on the sun's surface at the time.

Regas’s preferred method for viewing the sun safely is to use number 14 welder’s glasses. With these, he says, you can put the glass “right up your face, look right at the sun [and] stare all you want. Mom won't care.”

His final recommendation is to join up with one of the many astronomy clubs that are popping up around the country. They usually have filters on their telescopes — some that will even allow you to see prominences and eruptions on the sun during the eclipse.

A couple of things not to do: do not use undeveloped camera film, film negatives, x-rays, CD’s or foil wrappers. Back in the day, some of these things were actually advertised as ways to view a partial solar eclipse, but they are all completely unsafe. “Don't mess around when looking at the sun,” Regas advises.

Mom is always right, after all.