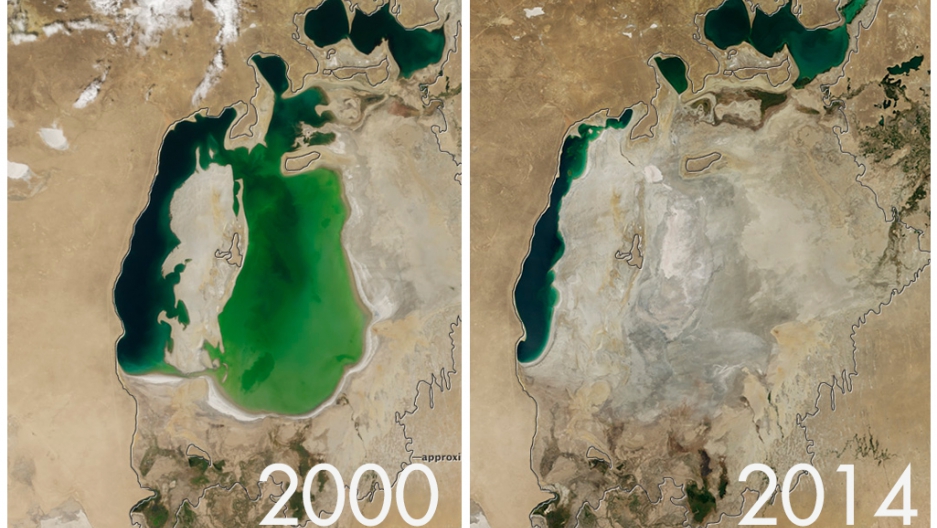 In an effort to show us our impact on the planet, NASA's Earth Observatory has a series of time-lapsed images from around the world. Each one shows the significant impact of humans have on the environment around them.

The Aral Sea is practically gone

On the border between Kazakhstan and Uzbekistan is the Aral Sea. Once well supplied with water by the region's two major rivers, the sea lost its river sources in the 1960s when the Soviet Union undertook a massive water diversion project to irrigate its desert.

What was once the fourth largest basin in the world has basically dried up at this point. The black lines on the time-lapse below represent the Aral Sea's original borders from 1960.

We are STILL cutting down the Amazon at alarming rates

Rondônia, Brazil was once home to 51.4 million acres of gorgeous, life-giving rainforest. In the last three decades, though, humans have gutted it.

We are moving mountains, and not figuratively

West Virginia is full of mining companies trying to reach a thin layer of coal under the Appalachian Mountains. To manage this difficult task, they use a process called "mountaintop removal," which sounds innocent enough and like a rather impressive feat. But really they just use explosive to blow up the mountain tops, which seems like cheating. On top of that it is massacring the region's biodiversity and making its rivers toxic. Mitigation practices so far haven't worked. The time-lapse below shows mountaintop removal mine spreading in just one county — Boone County, West Virginia — from 1984 to 2013.

Our ozone layer protects us (and all life on Earth) from harmful sun rays. Before 1979, the recorded concentration of the ozone layer had not dipped below 220 Dobson Units, which is fine. Since then though, it's thinned dramatically. In a rare and potentially world-changing and glorious moment, governments came together in 1987 and agreed to phase out harmful "CFC" chemicals, which were causing the Ozone damage. This year scientists said they had evidence that the ozone might be recovering. Whoohoo! There is still, however, a long way to go. The time-lapse below shows the growth of the hole in the ozone over Antarctica.

It's getting really, dangerously hot in here

The time-lapse below shows global temperatures for each decade, beginning with 1880. One thing is clear, the world is definitely getting warmer. According to NASA, whether the cause is human activity of natural variability — and the preponderance of evidence says it's humans — thermometer readings all around the world have risen steadily since the beginning of the Industrial Revolution."