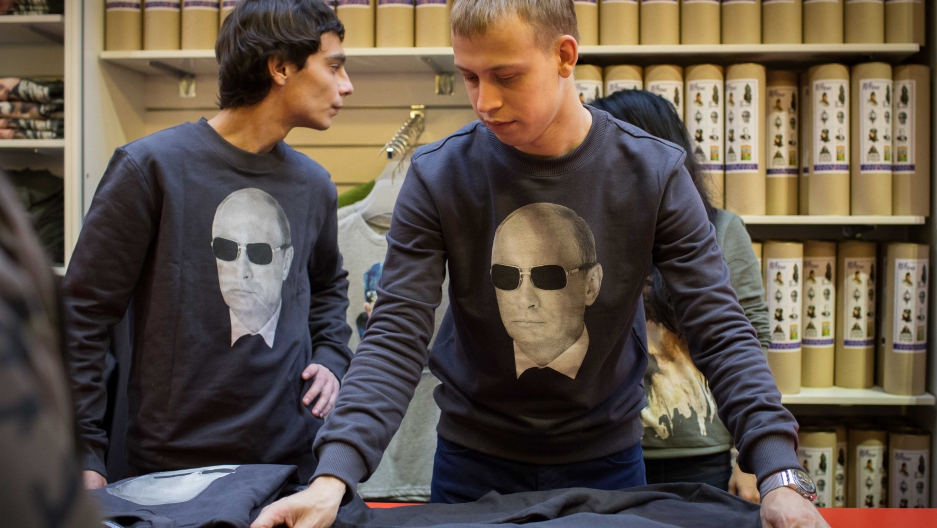 MOSCOW, Russia — Besides sky-high approval ratings and chunks of neighboring countries, what else might the leader of a resurgent global power want?

Try personalized apparel, a special calendar day, even the odd comparison to godliness.

As Vladimir Putin celebrated his 62nd birthday on Tuesday, there was no shortage of adoration for the third-term president. Many Russians credit him with restoring their country’s global influence, not least by thumbing his nose at the West.

But praise for Putin is also manifested in bizarre ways, leading some to believe a cult of personality — intentional or not — is emerging around the famously macho leader.

On the eve of Putin’s birthday, a pair of Russian designers launched a third run of their wildly popular T-shirt series depicting him in a variety of flattering poses and action shots.

That was only one of several fashion-based initiatives glorifying the Russian president and poking fun at his adversaries (read: Europe and the United States), but it’s received a significant boost thanks to public promotions by the likes of actors Mickey Rourke and Steven Seagal, two of his American admirers.

Inside the renowned GUM department store on Red Square, eager shoppers lined up on Monday to snatch up newly released sweatshirts fetching around $75 each.

Margarita Suntsova, a 43-year-old shopper, says she came because Putin is the first Russian president she’s truly proud of.

“It’s about strength,” she added. “We understand it’s a strength that he won’t bend for anyone and will defend our interests so that other countries in the world won’t have to think about it.”

Putin has long enjoyed a reputation as a TV-friendly action man, thanks to a carefully crafted media campaign spanning more than a decade and aimed at casting the former KGB agent as a capable leader.

That image was especially important early in his presidency, when it set him apart from Boris Yeltsin, his ailing and often drunken predecessor.

These days it’s taken on a life of its own, encouraged by approval ratings for Putin of more than 80 percent, buoyed by his actions in Ukraine.

More from GlobalPost: Putin: He does whatever he wants

Legislators recently proposed to mark his birthday with a special day honoring the Russian troops who seized Crimea last March and paved the way for Russia’s annexation of the Black Sea peninsula.

The mysterious soldiers, whose true provenance Putin revealed only after the operation, earned the popular moniker “Polite People” for what locals said were their respectful manners.

They inspired a cult following of their own, which produced a flood of memes as well as T-shirt designs.

But the annexation of Crimea is also seen as a personal achievement for Putin.

That’s probably why Igor Zotov, the lawmaker who last month proposed to create “Polite People Day,” believes the president’s birthday is “the ideal date” for his initiative.

“[I]t will be entirely and fully dedicated to the courage of the Russian people and the truth that they bear,” Zotov, leader of the Russian Party of Pensioners for Justice, told the pro-government newspaper Izvestia last week.

Although the Defense Ministry gave its support last week, it remains to be seen whether the measure will be approved.

Gestures like these have drawn jeers and embarrassment from opposition-minded Russians, especially the urban middle class.

The key difference, observers say, is that this love is more-or-less genuine.

While the Soviets had a state ideology and a widespread system of repression to enforce public displays of support, Putin has relied on a successful economic track record — at least until now.

“Support for Putin today relies completely on the economic motivations of the population,” says Alexander Morozov, a political commentator and editor of the Russian Journal. “People count on the fact that their wellbeing will continue as-is, and that no matter what, there will be some economic guarantees.”

Despite the apparent feelings of real gratitude, sometimes the displays of admiration are downright creepy.

That was the case when an infamous Russian Orthodox Christian activist named Dmitry Enteo held a lecture last month in Moscow titled “Will Putin Become God by Divine Grace?”

Bordering on blasphemous, his praise of Putin’s actions suggested the president is blessed with divine approval.

“[Putin] realized that the goal of his life was unification with God,” Enteo told an amused crowd. He also asked whether Putin is “an award from God given to us in advance.”

That sort of celebration isn’t exactly the norm, to be sure.

But it’s telling that Enteo is a pro-Kremlin activist who’s enjoyed widespread attention in Moscow for his conservative shenanigans — such as pelting gay people with eggs — that broadly reflect the government’s position.

More from GlobalPost: Britain’s Big Society is smaller than you may think

Despite his shock protests, he’s never been seriously reprimanded, unlike many opposition demonstrators.

Still, back at the GUM department store on Monday, not everyone was part of the fan club.

“First they chanted ‘Putin is a thief,’” grumbled one young man in his early twenties, referring to the anti-Kremlin street protests of 2011-2012, “and now they want his T-shirt.”