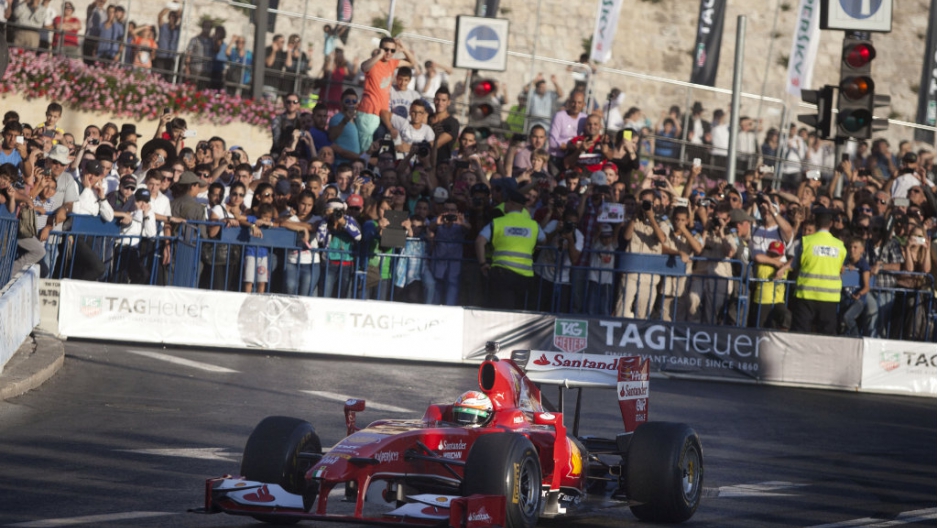 A Ferrari Formula One racing car in action during the 2014 edition of the Formula 1 Peace Road Show on Oct. 6 in Jerusalem, Israel. The two-day event returns for its second year, showcasing stunt performers and exotic vehicles, racing past historic monuments on the ancient city's streets.
Credit: Lior Mizrahi
Share

Here I was, stuck in ungodly traffic on the outskirts of the ancient walls of the Old City, that sacred quarry of stone that holds traditions dear to all three Abrahamic faiths. And through a crowd lined up along the ramparts and the sidewalks nearby, I suddenly heard the thunder of powerful engines and the screeching of tires.

At other times in this city’s history, I might have presumed the racket was a clash brewing between Israeli security forces and Palestinian fighters. But the resounding cheers coming from both Israeli and Palestinian families crowding the sidewalks told me this was different.

I meandered into the crowd and caught a glimpse of the latest phenomenon gripping this city: Formula One racing.

The municipality has, for the second year in a row, blocked the roads around the Old City and set up a Formula One racetrack.

The turbo-charged mechanical muscle and the incredible noise seemed a very long way from the daily murmuring of prayers at the Western Wall by Orthodox Jews, the crackling loudspeakers of the Dome of the Rock calling Muslims to prayer or the bells of the Christian churches echoing through the day.

Nir Barkat, the self-made Israeli millionaire turned mayor of Jerusalem, had the idea. Barkat is hell-bent on changing some of the marketing image of this holy city — a place often known only for either running conflict or ancient ruins.

Colleague and correspondent Noga Tarnopolsky wrote last year about the “Jerusalem Formula: The Peace Roadshow,” as organizers have dubbed it, and it has been part of the mosaic of change here that Noga has been opening my eyes to.

I lived in Israel for four years with my wife. We had two sons born here – one in Jerusalem and one in Bethlehem – when I was the Mideast Bureau Chief for The Boston Globe. I thought I knew the place pretty well, but it is changing.

That said, the old problems are undeniably still here at every turn. The mayor has been right at the center of protests in recent days against what Palestinians see as a land grab by Jewish settlers in the traditionally Arab neighborhood of Silwan next to the Old City. I remember covering this same story 15 years ago.

This time, the tension is simmering a bit hotter. Twenty-five homes were reportedly purchased through Elad, a right-wing Jewish organization that uses funds predominantly from Jewish Americans to purchase Palestinian homes. Saeb Erekat, the Palestinians’ chief peace negotiator, has blasted the housing program, saying, it is “altering the character of Jerusalem through isolating, containing and confining Palestinian existence.”

But the Formula One cars whipped past all of that, making a hairpin turn away from Silwan and the violent protests that have taken place there in recent days against the Jewish families moving in.

And the engines roared as the tricked-out race cars sped around a city where settlement expansion is continuing at an unprecedented pace. The issue was at the core of a rocky meeting between Israeli Prime Minister Benjamin Netanyahu and President Barack Obama this week, in which the White House condemned the announcement of 2,600 new housing units in a contested area of predominantly Arab East Jerusalem.

Palestinian leadership has said the planned expansion of settlements is undercutting the viability of a future Palestinian state. threatens a return to talks on the long-stalled peace process and leaves Palestinians with few options but to unilaterally declare a state.

Politics is always just around the corner in Jerusalem, and that has not changed. But there is one thing I notice that seems different from other times: A profound sense of dread that seems to be rumbling through the region with war escalating in Iraq and Syria as the US-led coalition steps up airstrikes on the Islamic State.

Netanyahu has bluntly pushed Washington to take military action if Iran does not give up its nuclear program. I’ve covered a lot of conflict in the region, including the first Gulf War; the first and second Palestinian intifadas; the war in Iraq and the Arab Spring. But now many longtime observers of the Middle East, myself included, fear that a regional war may already be underway.

So that begs the question: Is this Formula One event just a grand distraction from the fires that may soon engulf the Middle East?

Noga shared with me that she came at this whole racing phenomenon with a good deal of skepticism and the reflexive reaction of many liberal elites – a certain amount of disinterest and disdain. Except, as she pointed out, an undeniable truth is that the power of the engines is alluring and the motocross stunts are jaw-dropping. And the truth is that both Israelis and Palestinians seem to quite enjoy the spectacle, the speed, the power and the escapism of it all.

So when I write, “Behold the new Jerusalem,” I am not making a reference to the prophecies of the Book of Isaiah from which the phrase is taken.

I am just observing what is going on here, a collective yearning for movement, a desire to race away from all the politics and the senseless violence from both sides.

It seems at a glance that this ancient city might be trying to redefine and redeem itself in unpredictable ways. I hope that is true because it needs to find a way to move on. And most of all, I hope the people – Palestinian and Israeli as well as Muslims, Jews and Christians – realize their flawed and failing leaders are not getting them there to this new and better life.

They are going to have to take the wheel and drive the way forward themselves.