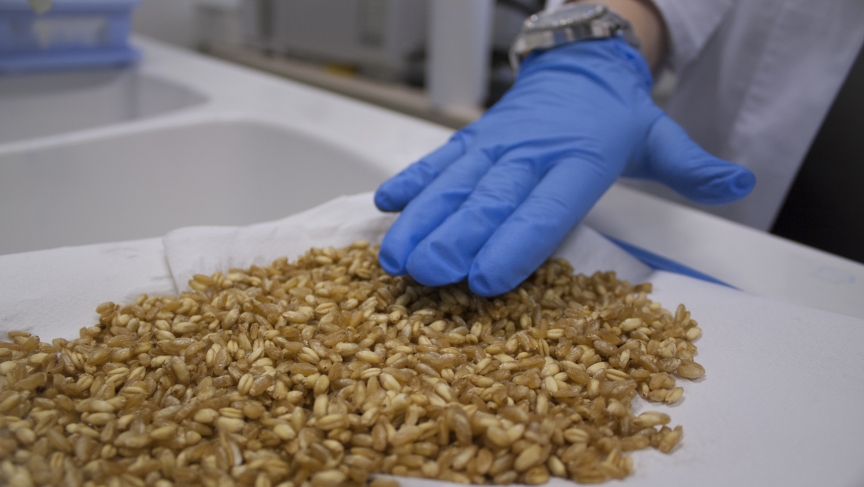 I’m standing in the doorway of a kitchen in southern Italy, where scientist Carmen Lamacchia is about to dish out her best recipe ever. It’s one that took her years to master.

She pulls some wet grains of wheat from a microwave oven. To the naked eye, the grains look just like ... well, wheat grains. But inside the grains, something has changed — the amount of gluten, a crucial protein.

“After modification with microwave treatment, we get an amount of gluten of about 80 parts per million,” Lamacchia says. That’s about 10 times less than regular wheat.

Gluten is what creates that chewy texture in your bread, that tenderness in your pizza. We’ve heard a lot lately about how gluten is unhealthy and makes you fat. But Lamacchia, who teaches food chemistry at the University of Foggia, says that’s bunk.

Instead, she’s concerned about people with celiac disease, an autoimmune disorder. For them, gluten is toxic. It destroys their intestines, blocks the absorption of nutrients and fiddles with the immune system. But Lamacchia says it won’t stay that way for long.

“Oh, it will be a revolution," she says of her treatment. "The part which is toxic, it’s, like, hidden. The enzyme in the celiac patient’s intestine won’t recognize this protein, and won’t activate the inflammatory process typical of the celiac patient.”

Lamacchia’s method is now patented. She calls it “gluten-friendly” — but some experts say it’s not friendly enough.

"I don’t think that this approach will be useful for people with celiac disease,” says Dr. Alessio Fasano, who directs the Center for Celiac Research at Massachusetts General Hospital in Boston. A prominent expert in celiac disease, Fasano is impressed but not convinced. He says celiac sufferers simply won’t trust 80 parts per million.

Lamacchia says the immune system doesn’t see her modified gluten either. Twenty or 80 parts per million don’t matter if the quality of the gluten has changed, she says — and she also says there's proof.

“We did [an] experiment on t-cells [white cells from the immune system] coming from the intestine of celiac patients. And on those cells, we tested extract from the modified flour. These cells didn’t produce the inflammatory cytokine," she says.

In other words: no damage, no autoimmune response. The next step is to prove that this works on a larger scale, with clinical trials on humans. Industrial flour companies around Europe aren't even waiting that long. Lamacchia's detoxified wheat could rock the $10 billion gluten-free industry, so manufacturers are already banging on her door.

Susanna Neuhuold, a food safety manager at the ever-active Italian Celiac Association, is cautious but curious about the gluten-friendly wheat. “We have to avoid a specific ingredient that is so present in Italian cooking, pasta, pizza, bread — is not easy,” she says. “If this gluten-friendly … could help people eat more tasty, more safe, more quality food, it’s a good thing."

And of course, there's the huge market of people — 100 million people in America alone — who have embraced gluten-free eating as a choice. Dr. Fasano from Massachusetts General Hospital points out that the term “gluten-free” had become so ubiquitous — and such a joke — that at one point, mineral water and bananas had been labelled “gluten-free.”

“The industry had a tremendous role in pushing the gluten-free frenzy out there, no question in my mind,” he says. “And now, they are focused on how long this is going to be, how sustainable this is.”

It’s looking good so far. Eight million people in the US have celiac disease, gluten sensitivity or gluten allergies, along with their health-conscious friends. Given the reality of American culture right now, Fasano says it’s possible that gluten-friendly could become a hit.