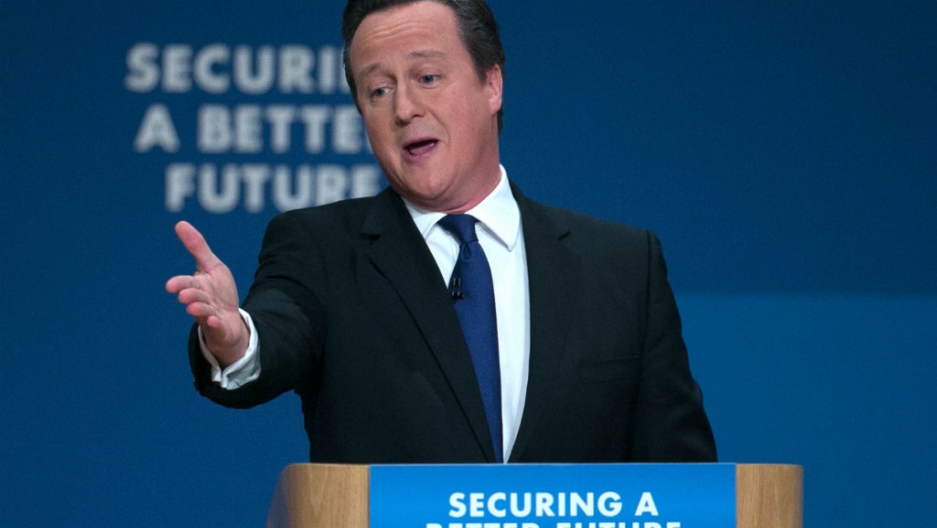 Prime Minister David Cameron gestures as he delivers his keynote speech to the Conservative party conference on Oct. 1, 2014 in Birmingham, England. Cameron addressed the conference for the final time before the general election in 2015.
Credit: Matt Cardy
Share

Under the Tories’ proposal, judgments made by the European Court of Human Rights (ECHR) would no longer necessarily hold water in local courts in Britain, nor would they need to be followed by British forces overseas.

The plan also includes a scheme to toss out the Tony Blair-era Human Rights Act, and draft a new British Bill of Rights that could undo over 50 years of landmark human rights agreements by scrubbing parts of the European Convention, including a controversial article that allows prisoners to vote. Cameron called some of the recent rulings by the court “frankly wrong” this week, while insisting he wanted to maintain strong human rights in Britain.

Many civil rights groups see this as a unilateral move against the ECHR, but Conservative party members say the court’s rulings have gone too far to guarantee rights to terrorists and criminals, and could have a negative impact on national security.

In addition, Cameron believes that a new bill should give power over human rights law in Britain back to Parliament and local courts, instead of the UK being tied to international statutes.

Human Rights Watch fears that disregard for the European Convention will result in a myriad of issues, including loss of rights to prisoners, suspected terrorists, and detainees.

“There’s a narrative that there are people who are less deserving of human rights than others,” Izza Leghtas, Human Rights Watch’s researcher for Western Europe, told the RIGHTS blog. “The whole debate, and now looking at this document from the Conservative party, leads me to think that they would be reducing the rights contained in the Human Rights Act, not increasing them.”

There is also a significant concern that losing the UK’s voice in the Council of Europe would result in a domino effect, whereby other EU countries could begin to disregard the court’s rulings as well. On an international scale, Britain would cease to be able to influence other countries to buff up their human rights records. It would set a bad example for the likes of Russia and Ukraine, two countries already at odds with accepted international human rights laws, and numerous others. It would, experts say, be a monumental.

“Internationally, this goes way beyond Europe to countries where the UK is speaking out against human rights abuses,” said Leghtas. “What kind of credibility can someone have when they’re scrapping their own human rights act or if they leave the ECHR? It’s extremely damaging. Other countries can say, ‘Well, if the UK is just deciding to ignore human rights, then what’s stopping us from doing the same?’”

The Tories call the past 50 years’ additions to the European Convention “mission creep,” and maintain that their bill of rights would include the original draft of the international treaty. But as a living document, the Convention’s evolution has changed with the times and remained the minimum standard for international human rights.

“The Conservative plans are legally coherent, but they would take the UK back half a century to the days before the convention became enforceable by individuals,” noted legal scholar Joshua Rozenberg in the Guardian. “People in Britain would also lose the right to take the British government to the human rights court in Strasbourg, a right they have enjoyed since 1966.”

Under the Conservative plan, British forces overseas would also be immune to the reach of human rights law, meaning cases brought by detainees against British forces in Iraq and elsewhere would instead be subject to laws voted on by Parliament, not judgments by the ECHR.

“The Human Rights Act gets the balance right between protecting our rights and preserving parliamentary sovereignty,” said the director of the law reform charity Justice, Andrea Coomber, in a release. “Parliament isn’t right 100 percent of the time, as ID cards, control orders and DNA databases remind us. If we give our parliament the right to a ‘pick and mix’ approach to human rights standards, we send the message that that is also OK for the Duma. If the rule of law is tempered by the popular majority, it becomes no real rule at all. Talk about this kind of British Bill of Rights might be good politics, but it’s unnecessary and dangerous for our constitution.”