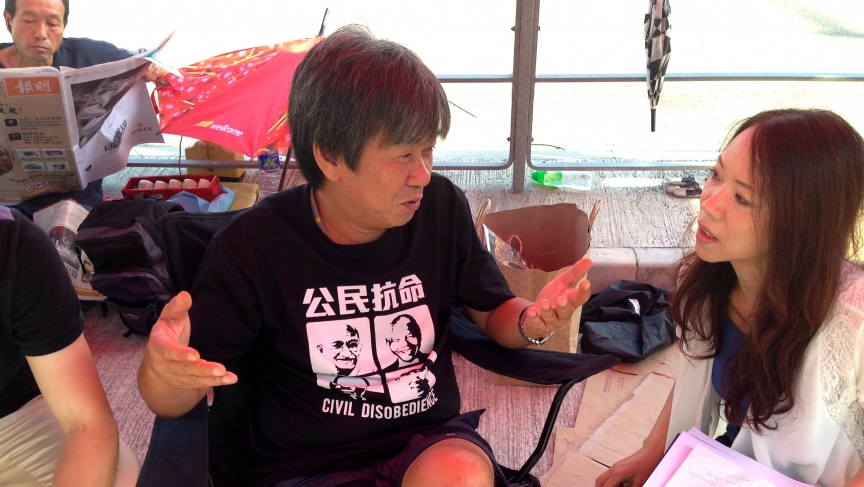 Leung Kwok-hung – aka “Long Hair” (on left) – was among a small group of protesters keeping vigil outside the office of Hong Kong’s chief executive on Monday morning.

Everybody still calls him “Long Hair,” even though Leung Kwok-hung’s locks were chopped off by prison officials earlier this year. The 58-year-old Hong Kong politician spent a month in jail after being charged with disorderly conduct for actions at a protest.

Leung's signature look over the years has been more metal master than lawmaker. He's known for rocking a Che Guevara T-shirt almost all the time, including at official government meetings. When we spoke, he wore a Che wristwatch and a black T-shirt with the words "Civil Disobedience" printed on it.

Leung has been a near constant presence at the pro-democracy demonstrations of the past week. That comes as no surprise to his fellow Hong Kongers. As a legislator, he has been a champion of various left-wing political causes and has taken part in many protests over the years, including stunts like throwing fruit and fake feces at the territory’s chief executive.

I sat down to chat with Leung at a sparsely populated protest site outside a government office on Monday morning. While we talked, he smoked cheap Chinese cigarettes and led a small group of young protesters with a bullhorn, chanting about their demands for universal suffrage. Here’s an edited transcript of the interview.

Some protesters are taking issue with calling this movement a ‘revolution.’ Why is that?

I don’t think it’s a revolution either. Up until now, we’re not prepared to take over the regime. So, can you call it a revolution? I think for the media, maybe it’s more sensational when you call something "revolution." I mean, the nature of a revolution is when people use force to change society fundamentally. I haven’t seen this yet.

This is a different kind of movement then?

If you measure the movement over the last few days, you might say it’s been revolutionary. A lot of people got a great deal of empowerment. OK? There might be revolution in their minds.

Who is this fight against? Is it really against China?

It’s crystal clear. What happens in China politically is one-party rule. So, if Hong Kong makes a significant change in its political system, of course it will affect Beijing. Just like what happened in eastern Europe — the satellite republics had an impact on the USSR. It’s very simple.

But is this movement against China?

Not yet. We are urging Beijing to return the power which belongs to the Hong Kong people and keep their promise. But, you know, if Beijing feels uneasy, I’m sorry.

Is Beijing really in charge here in Hong Kong?

Yes. What happened in August, the Chinese government in Beijing decided the framework of our political reform, which has turned out to be undemocratic. They claimed that, according to the Basic Law [Hong Kong’s mini-constitution], we need to set up a nomination committee and any candidate who wants to run for office [of chief executive] needs 50 percent of those nomination votes. So, it’s Beijing that makes the rules for us.

Were you surprised by that decision?

Yes, I was surprised. Because I didn’t think Beijing would be so shameless. If you tell anyone around the world to ask whether the framework of Beijing is real, genuine universal suffrage, they will say it’s a joke. How can you censor the candidates if you want to claim that the next election is going to be a democratic one under any definition of universal suffrage?

How could you be surprised when China’s President Xi Jinping is clearly no fan of western-style democracy?

Well, I don’t know him very well. But it seems that he’s a figure like those fascist leaders [of the past]. They’re always like that, "I know what’s the problem. So, you guys keep your mouths shut. I’m going to take care of business for you." Mussolini said so. Adolf Hitler said so. Franco said so.

I’ve talked with some mainland visitors here in Hong Kong over the past week. One guy, for example, from southern China — who was wearing a yellow ribbon — told me that he’s been coming to the protests, that he likes what the student demonstrators are doing and that he’s been helping them. Should China see this sort of thing as a threat?

They’re so scared that they need to lock up Liu Xiaobo, who got the Nobel Peace Prize. They are so concerned about the impact from the outside world, they block out so much of the Internet. That’s it.

Do you worry about going too far with these protests? If you provoke a reaction from China that brings the PLA out and then more control over Hong Kong by Beijing, will it all be worth it?

Well, to be or not to be? That’s always the question. I don’t want to risk other people’s lives. But I also don’t want to miss an opportunity to win more democracy for Hong Kong. It’s like a [soccer] match. You never give up. You try and try. Eventually, you may get a goal. But if you’re fed up with yourself, and you’re demoralized, you will just concede more goals.