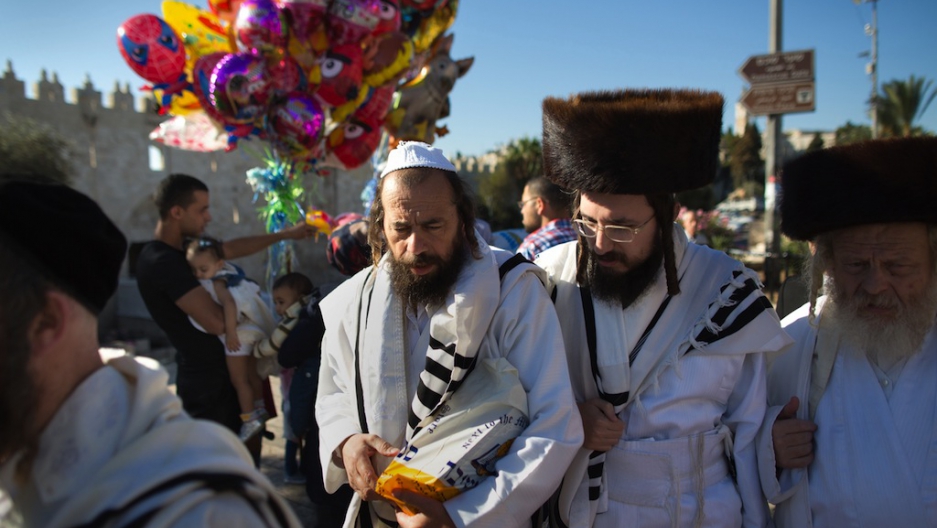 Ultra-Orthodox Jews returning from Yom Kippur prayers near the Western Wall walk past Palestinian Muslims (back-L) celebrating Eid al-Adha on October 4, 2014 in Jerusalem's old city. The concurrence of the holy days has not occurred for 33 years because the two faiths use different lunar calendars.
Credit: Menahem Kahana
Share

JERUSALEM — Once every 33 years the stars align and Yom Kippur, the Jewish Day of Atonement, and Eid el-Adha, the Muslim and Druze Feast of the Sacrifice, occur on the same day.

This was the case on Saturday, and initial reports of the unusual confluence were ominous: Al-Monitor, the Middle East news site, announced "Israel braces for conflict as Yom Kippur, Eid al-Adha coincide."

Then there was reality on the ground, where the jocular hashtag #EidKippur was trending all day and Jerusalem, the central hotspot, enjoyed a balmy, low-key Holy Day. Bored cops loitered about on empty street corners and mischievous boys from

Beit Safafa, a well-to-do Arab neighborhood, rode their bikes along the new path that runs along the old train tracks, and stopped by some benches to pee — completely publicly — looking back and giggling at unhappy observers.

On Friday evening, as the holiday rolled in, a festive giddiness characterized exchanges in Abu Tor, one of Jerusalem's mixed neighborhoods, with Muslims wishing Jews an easy fast and Jews wishing Muslims a happy Eid. The streets of Beit Safafa emptied of cars, just as in all the Jewish neighborhoods of West Jerusalem, and as in some childhood fantasy gleeful kids on bikes took over. A spat broke out at one junction when boys playing football got in the way of the cyclists.

At 10:30 pm, Fady Alyan, the father of 7-year-old Aziz — one of the kids on a bike — laughed quietly about the fact that his son, who studies Arabic, Greek and French in school, probably thinks that "Yom Kippur" means "holiday of late-night biking!"

Unlike some of the journalists, Israeli police must have had the sense that beyond Jews praying and Muslims celebrating, not much was going to happen. According to Micky Rosenfeld, the police spokesman, a total of 2,000 security officers were deployed to safeguard the entire country of just over 8 million people.

In Jerusalem, he said, "a few hundred" more police officers were present than would have been on any other Yom Kippur.

"It was a completely quiet day," he said. "Nothing happened."

The police did place road blocks around some east Jerusalem neighborhoods, but these were not more than metal barriers secured by plastic police tape.

In Abu Tor someone had moved the barrier to the sidewalk by Saturday afternoon. Beit Safafa, a neighborhood that blends into the more Jewish Katamonim, was blocked off on one side and left unperturbed on the other, which many residents took to be a completely unnecessary annoyance.

Izzedin Shumrin, 26, an apprentice chef at the Dan Boutique hotel and a student of graphic design, who lives in Abu Tor, describes himself as "secular but respectful."

He found the emptying of roads for Yom Kippur arbitrary and onerous. "We fast for an entire month and nobody closes a single street," he complained. "Its fine if they want to go out on their bikes, but isn't this what we have sidewalks for?"

He'd wanted to drive to visit relatives for the holiday, and couldn't.

But digging into his complaint, the unreported Jerusalem emerges: Shumrin works with Jews, lives in a mixed neighborhood and complains that his civic life shouldn't be disrupted for their customs.

What could be more normal, or more encouragingly banal?

Jerusalem is no utopia. Arabs and Jews mix only very gingerly, often in places people have no choice but to visit: hospitals, courthouses and banks. But it seems there is more sharing of space in parks, sports centers and shopping malls these days.

Jerusalem is a place where an Israeli girl band called Bint el-Funk — in Arabic, Daughters of Funk — have become a hit blasting what they call Jewish-Arab hip-hop.

It is a place where Ayelet Paran, a mother of four and grandmother of two, leaving synagogue services on the eve of Yom Kippur, glances at a passing car and despite the prohibition on driving says, "It’s a mixed neighborhood. They don't have to stop driving."

Ironically, Christianity, the religion most closely tied to the concept of 33 years (Jesus is believed to have been 33 when he was crucified) was left out of the moment.

Zahi Khouri, an aide to the Greek Orthodox Patriarch, chuckled and said, "It’s OK. I'm a little bit Jewish too, for the holiday."