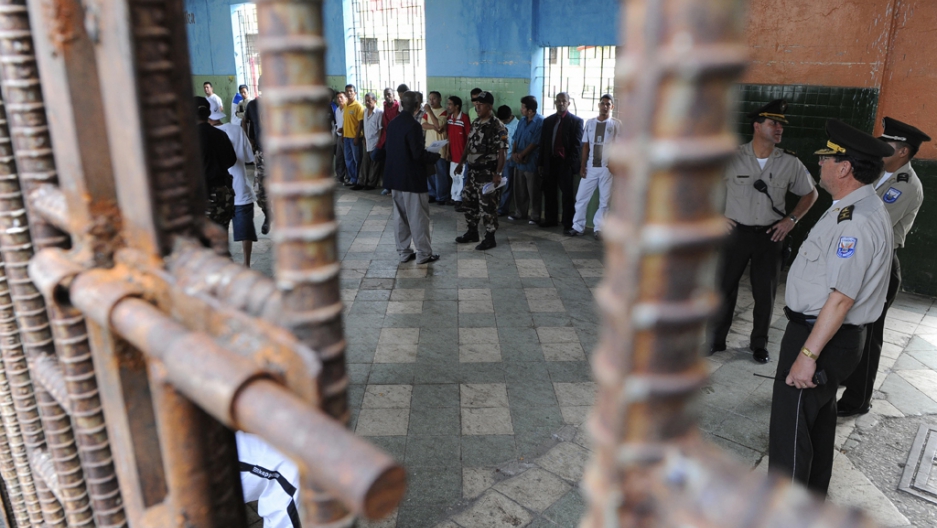 The move is a result of the country’s new criminal law, which took effect Aug. 10. It treats “drug mules” who commit the low-profit, high-risk offense more as vulnerable people exploited by cartels than as hardened criminals.

The reform retroactively applies heavily reduced jail sentences to those already convicted of attempting to transport relatively small amounts of drugs — often hidden dangerously inside their own bodies — out of the Latin American country.

Around 500 mules have already been freed and at least another 2,000 are expected to follow, says Jorge Paladines, national coordinator of the Public Defender’s Office. The sentence reduction is not automatic and can only happen after a court hearing, which the prisoner has to request.

“There is a policy of seeing mules as victims of the drug trade,” Paladines told GlobalPost. “I don’t like using the term ‘sentence reduction,’ because was their sentence fair to start with? This is really about sentence proportionality.”

This is hardly the first time Ecuador’s populist leftist president, Rafael Correa, has defied the United States. In the past, he’s granted asylum to WikiLeaks founder Julian Assange and booted the Drug Enforcement Administration out of the country.

But this time, Correa has an unusually personal reason for his stance: His father was imprisoned in the US for three years in the 1970s for being a drug courier.

Although he usually avoids the subject, Correa has revealed he had a “difficult childhood” as a result.

Ecuador actually produces virtually no cocaine. But it is a major stop-off point for much of the coca-derived powder produced by its Andean neighbors, especially Bolivia and Peru.

More from GlobalPost: Ecuador, cocaine’s stopover on the way to market

Under its previous Narcotic and Psychoactive Substances Law, anyone caught smuggling up to 20 kilograms (44 pounds) of drugs received a mandatory sentence of between eight and 12 years — even if the actual amount was miniscule.

Under the new law, carrying less than 50 grams (1.8 ounces) gets you two to six months in jail, while the penalty for someone transporting up to 2 kilograms (4.4 pounds) is between one and three years.

The harshest sentence of 10-13 years is reserved only for those moving more than 5 kilograms (11 pounds).

Most mules are caught with between 1 and 2 kilograms. They conceal it in their luggage or often in their own bodies, crammed into tiny capsules and then swallowed or, for women, stuffed into the vagina. If the capsules leak, the smuggler can die from a massive overdose.

Experts say the micro-traffickers tend to come from poor families, often with limited education, and are easily preyed upon by cartels, whose members mislead them about the risks. Payment for a single run is thought to vary from $5,000 to as little as $1,000.

“The objective [of this law] has been to decriminalize poverty,” says Gerardo Esteva Vallejo, a lawyer from Spain who has been visiting Ecuador since 2007 to provide legal support for Spanish prisoners there. “This is a crime that, of course, is only carried out by people of limited resources.”

There are currently 85 Spanish mules in Ecuadorean jails and another 24 convicted in the South American nation but now serving their sentences in their homeland, Esteva Vallejo says. Their numbers have swelled in recent years with Spain gripped by economic crisis, including a ruinous unemployment rate that nearly hit 27 percent last year.

Many return to Spain “mentally and physically broken” after their time in harsh prison conditions, he adds. Paquita, an inmate at a women's prison in Quito, spends time with her son inside her cell. (Rodrigo Buendia/AFP/Getty Images)

Yet experts say most low-level traffickers behind bars in Ecuador and other Latin American nations are locals. They’re often women, including sex workers, single mothers and drug addicts who are desperate for cash.

According to the International Drug Policy Consortium, the number of women behind bars in this region almost doubled from 40,000 in 2006 to 74,000 in 2011, with around 70 percent on drug charges.

“This is an important step towards fixing a broken criminal justice system that often falls most unjustly on the most marginalized,” she added.

Ecuador’s jam-packed jails — estimated to hold double their intended capacity — can definitely use the relief.

Overcrowded penitentiaries are a serious problem in much of Latin America. That partly stems from the police’s hyper focus on drug arrests since countries here adopted United Nations treaties and succumbed to US pressure to lock up more narco-traffickers, according to Systems Overload, a report on the region’s prison crises. Washington is even accused of conditioning economic aid and trade benefits on governments’ willingness to play by its drug war rules, the report says.

Some of the region’s leaders have been trying to turn the situation around.

In 2008 and 2009, Correa pardoned more than 2,000 convicted drug smugglers. But the new criminal code enshrines reduced sentences in law rather than leaving them to the whim of the president.

“I know where that drug law came from: imposed by the gringos at the beginning of the 1990s and accepted submissively by [Ecuador’s] appeaser governments [concerned they would lose their] visa to the United States,” the president said in 2011.

Ironically, Washington actually appears to be subtly backpedalling from the hard-line approach President Richard Nixon unveiled in 1971. US officials have called for an end to the term “war on drugs,” to treat the issue as a public health problem, and to reduce sentences for low-level drug dealers.

Outgoing US Attorney General Eric Holder has complained about America’s “overreliance on incarceration.” “It comes with human and moral costs that are impossible to calculate,” he said in March.

In an email to GlobalPost, the US Embassy in Quito said its officials are “aware” of the South American country’s legal reform but did not comment on it. Officials are informing the handful of US citizens in prisons there so they can apply to have their sentences reviewed, the embassy added.

Ecuador’s Interior Ministry did not answer requests for comment, and officials haven’t made public exactly how many prisoners could benefit from the reform.

Paladines, the Public Defender’s Office coordinator, says the country currently has 6,700 people in prison convicted of drug offenses, around 5,600 of whom have been convicted for possession. “Not many of them are drug lords,” Paladines adds.

But how could someone make such a bad judgment as to attempt to board an international flight with illegal drugs worth hundreds of thousands of dollars?

Esteva Vallejo, the Spanish lawyer, responds: “I ask the same question. The truth is they [the mules] don’t really understand the potential repercussions of what they are doing.”

“They are typically people who have not traveled abroad before, and some may think that in developing nations, the police and officials in the airport may not be that well trained or equipped.”

“Of course, the gangsters encourage that and lie to them and tell them they won’t get caught.”