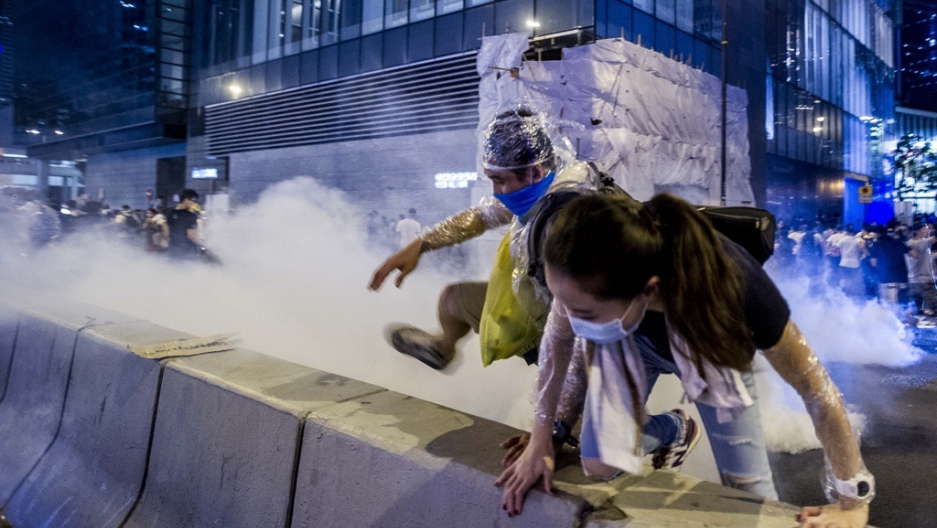 Pro-democracy run away during a demonstration in Hong Kong on September 28, 2014. Police fired tear gas as tens of thousands of pro-democracy demonstrators brought parts of central Hong Kong to a standstill on September 28, in a dramatic escalation of protests that have gripped the semi-autonomous Chinese city for days. It marked a dramatic escalation of protests in the city, which rarely sees such violence, after a tense week of largely contained student-led demonstrations exploded into mass angry street protests.
Credit: XAUME OLLEROS
Share

HONG KONG — As the student-led protests here roll into their second week, surviving a weekend of attacks and alleged police indifference, a feeling of calm has returned, tinged with uncertainty.

How will this end, and when?

Protest leaders continue to debate how to negotiate with the city government, while the numbers of protesters dwindle to a committed core.

For many, the weekend marked a high-point in the weeklong pro-democracy demonstrations. While the future may be unclear, the #OccupyCentral movement has already left a legacy of remarkable and powerful images testifying to the hopes of the city's younger generation. Here are just a few of the many inspiring examples from the last week.

1. The sea of smartphone lights that filled central Hong Kong during the evening rallies Same scene from above. Fireflies of freedom! 3. The brigade of slogan-covered “democracy buses” that formed the first road barricade in Mong Kok 4. The manga-inspired watercolors of Umbrella Girl

5. The inspiring persistence of protesters after thunderstorms and torrential rain 6. After attacks on protesters by thugs in Mong Kok, the return of students in force, outfitted with helmets, goggles, knee pads, and (of course) umbrellas 7. Across the city, an outpouring of inspired creativity — in posters, signs, art, slogans. 8. The Lennon Wall—the thousands of notes from citizens expressing their hopes and covering the exterior of a government building 10. On Sunday night, on the eve of a government deadline for the protesters to leave, a student-created statue arose in Admiralty: the “Umbrella Man.” Ultimately, the government allowed the students to stay.

All images by Ben Carlson/Globalpost.