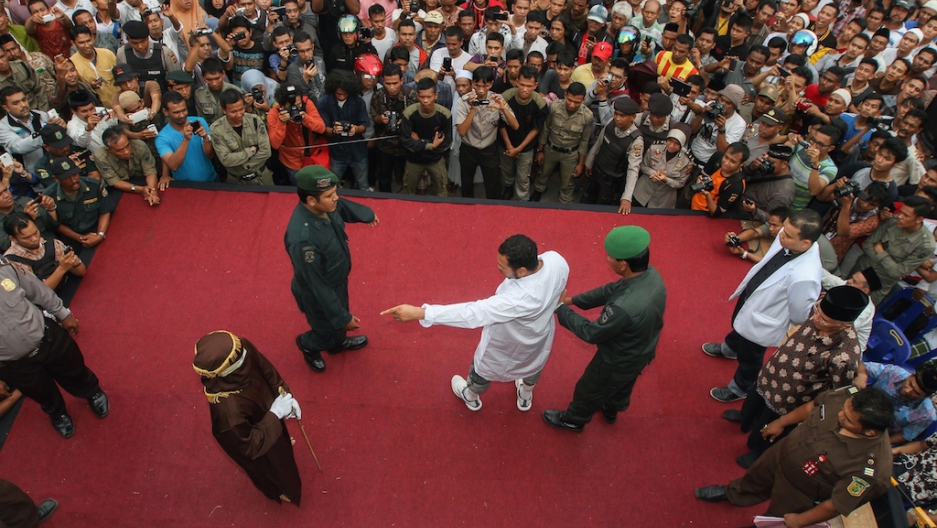 An Acehnese man convicted of gambling at a caning. Gays can now be punished with 100 lashes.
Credit: STR
Share

In Aceh, the most orthodox corner of Muslim-majority Indonesia, gay sex is now punishable by 100 lashes. On a public stage. By a cane-wielding figure clad head-to-ankles in dark brown robes (with a yellow decorative fringe).

The sting of a rattan cane is only part of the punishment. Aceh’s officials admit the primary objective is shame. That’s why they invite crowds to jeer and gawk and excitedly count off the lashings meted out to men and women accused of petty crimes.

The lashings are administered under Sharia law, a moral code dictated in the Quran that dates back the seventh century. Aceh’s modern-day whipping sessions are meant to play out as they did in ancient times — only with teenagers recording the beatings on their iPhones.

In the 12th century, Aceh was among the first places of Asia to absorb Islam from seafaring Arabs. Today, the far-flung province remains proudly orthodox. It’s the only territory in Indonesia that enforces Sharia law, which forbids alcohol, premarital romance and women in tight jeans.

In recent years, Aceh’s officials have ramped up their anti-gay rhetoric. A popular deputy mayor has proclaimed homosexuality a “social disease.” A former Sharia police chief noted that, technically, lesbians can be beheaded and tossed in the sea.

The fact that officials restrain from Sharia’s harshest punishments — like stoning — is cited as proof that Aceh’s take on Islamic punishment is actually lenient.

Still, some who are sentenced to lashings refuse to surrender their pride. Instead, they puff out their chests defiantly as they’re being lashed — all to prove they’ve got the guts to take a beating.

One hulking man whipped for gambling in September stepped on stage, potbelly exposed, and tried to yank away the cane while being lashed. The crowd roared with approval.

Earlier this year, eight male vigilantes stormed into a 25-year-old woman’s home and caught her with a married man. Then they gang raped her and doused her body in sewage. Though the men were charged with rape in criminal court, according to the Jakarta Globe, authorities decided the rape victim was still guilty of infidelity and subject to a public whipping.

In Aceh, these appeals to hard-line Islamic purity are similar to US politicians extolling a return to “family values.” Rhetoric about old-fashioned religious morality appeal to the base. In recent years, Islamic authorities have openly complained that Aceh’s existing interpretation of Sharia only covers unmarried males and females in close proximity — leaving a loophole allowing for gay romance.

That loophole is now closed.

Many among the current crop of leaders trace their roots to Free Aceh Movement, a separatist guerrilla faction that fought the Indonesian army for three decades.

In 2001, the Indonesian government granted Sharia law to Aceh in hopes of winning over Islamists who were otherwise sympathetic to the rebellion. After the guerrillas negotiated for peace in 2005, they transformed into politicians and retained the popular Islamic laws.

Indonesia’s human rights advocates are deeply horrified at the harsh codes against homosexuality. It’s “as if we’re going back hundreds of years,” according to Chika Noya, an Indonesian gay rights activist interviewed by the Jakarta Globe. Another activist insisted the punishment belongs in the Middle Ages.

“Gays and lesbians are human beings also,” said a female Indonesian lecturer from Aceh in an interview with GlobalPost. “Who are we to go against God’s creations?”

But she conceded that “those who are against it are the minority.” Hardliners have become so emboldened in Aceh, she said, that publishing her name, employer and pro-gay stance could bring on serious repercussions.

“It is hard for people like me in this community to say openly that we’re against it,” the lecturer said. “Because people will say we’re against what the holy book and God says ... and that means, in their interpretation, they can kill us.”