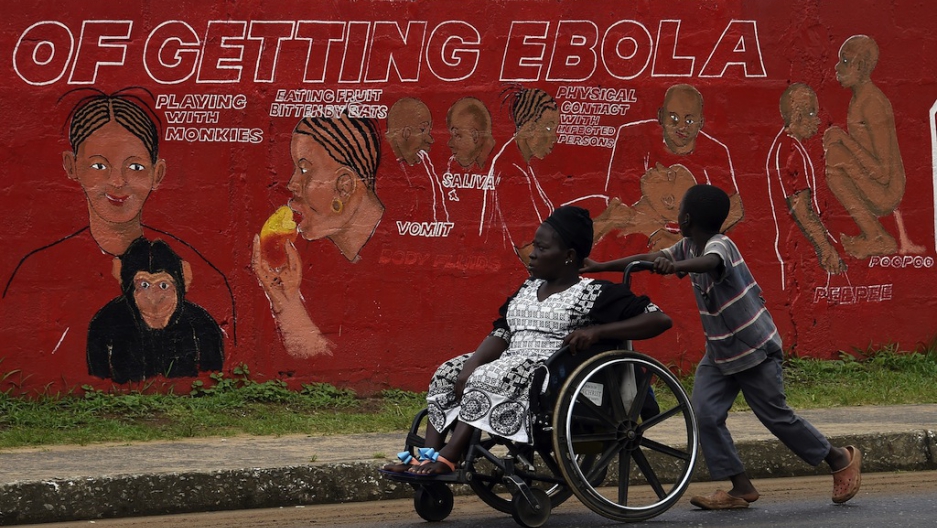 A boy pushes a woman in a wheelchair past a wall bearing information about Ebola in Monrovia on September 25, 2014. World leaders were asked to pledge urgently-needed aid to battle Ebola in West Africa as Sierra Leone quarantined one million people in a desperate bid to beat back the deadly virus.
Credit: Pascal Guyot
Share

SILVER SPRING, Md. — The news coming out of West Africa is nothing if not sobering. The number of dead and infected with Ebola continues to rise, and the outbreak shows no sign of abating any time soon. As President Obama mentioned in his remarks on Ebola, the situation will get worse before it gets better.

By putting so much emphasis on the awful effects of Ebola, are we misplacing our effort to treat the crisis? Judging from the images we are seeing in the media, there are only three types of people in West Africa: the dead, the dying, and the Hazmat-suited workers caring for them.

The reality of course is far more complex: millions of individuals are not infected, and are simply doing their best to go about their lives under these extraordinary circumstances. Any response that fails to take this into account, and focuses solely on treatment of those already infected, will undoubtedly fall short.

The international community needs to think not just about the people dying from Ebola, but about how we can get ahead of this crisis and actually curtail it.

In order to effectively prevent the transmission of Ebola, it is essential to engage communities in educating them about the virus, its transmission, and its prevention. This cannot be accomplished by a traditional top-down mass-market public information campaign; many people in Liberia live five hours from the nearest radio or television signal. Rather, the response requires direct engagement with communities to help them understand the local risks and co-designing solutions.

While we in the West may understand the epidemiology of Ebola, locally the people in a community know where they are at the highest risk. When presented with comprehensive information about Ebola — as well as protective gear — Liberians are better equipped to avoid risks and take precautions.

For example, one community in Lofa County identified motorbikes used as public transport as one of the highest-risk activities, and focused their prevention efforts on ensuring that drivers and passengers received adequate protection.

It is this kind of approach that will help us to get ahead of the Ebola crisis, and assist those who have not yet contracted the virus. Of course, people in Liberia rightly fear many aspects of the disease, from burial teams dressed in all-white protective gear discarding traditional burial rites, to fears about a government conspiracy causing or faking the outbreak.

Unfortunately, many people have long been distrustful of the government, while others are suspicious of modern medicine, while still others hold strong cultural views that prevent them from fully engaging.

These are exactly the kinds of fears that are best tackled in a community-based environment where voices from all sides can be heard. This approach can help explain the basics, such as why burial teams are dressed the way they are, and shift communities away from denial and avoidance to active engagement.

Global Communities has worked in Liberia for ten years, engaging communities in some of its most remote regions on matters of sanitation. Through ongoing partnerships with USAID, the Liberian government and community-based leaders, we helped create lasting behavioral changes, from hand washing to latrine usage.

With the recent outbreak, we are supporting burial teams and contact mapping, but most of all, these same health workers who led our sanitation efforts are now leading engagement and education and working with communities. And those communities are teaching us what we need to know about how to prevent Ebola spreading.

We will be there throughout this crisis, helping people take ownership of their own health, and throughout the aftermath, to help rebuild and recover.

There is no known cure for Ebola and the efforts to find one are invaluable. But efforts that can be made to stop the spread are less expensive, saving billions of dollars in the long run, and can even help fight the spread of more common, but equally deadly contagions.

In Liberia, the worst effects of the disease could be not just thousands dead, but the destabilization of a country which has only recently been recovering from decades from civil war.

The loss of family members has left widows, orphans, and widowers increasingly food insecure. This damage to civil society, combined with a public health infrastructure reeling from the loss of so many trained professionals, could easily create an even deeper crisis.

The more we mobilize to reach the population, the fewer deaths we will see and the sooner the country will be able recover.

While we cannot overstate the severity of the recent outbreak and the havoc it is wreaking on West Africa, Liberians are not living in a Hollywood disaster movie and the world is not going to end tomorrow.

For many in West Africa, their main concern is trying to find some normalcy and continue on with their lives. We must do what we can to work with them to ensure that, in spite of all the odds, they can continue to do just that.

Pia Wanek, Director of Humanitarian Assistance here at Global Communities, which is currently working on the ground in Liberia to assist in the response.