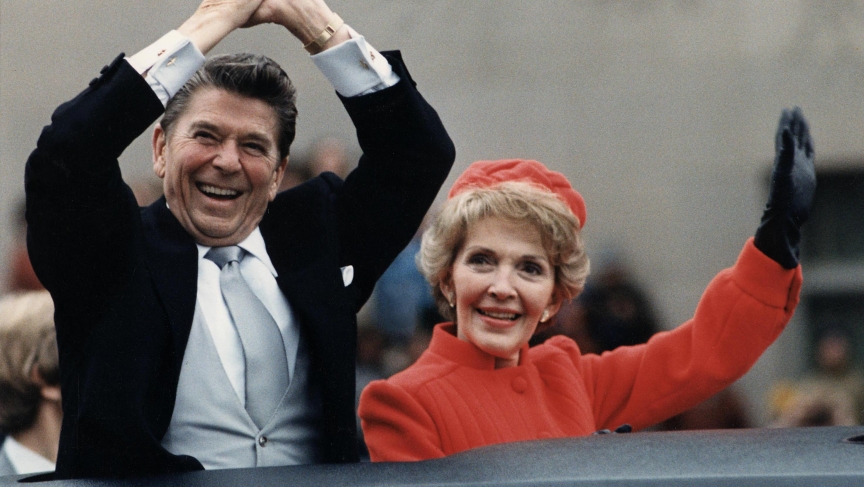 Ronald Reagan and his wife, Nancy, wave to crowds from their limousine during Reagan's first inauguration parade in 1981.

In the steamy printing room of an early 20th-century Brooklyn shop, the Reagan campaign was born. Kind of.

"It's one of my favorite stories," says author Steven Johnson, "It's actually one of the first stories that was kind of the seed of this whole project."

That project is his new book, How We Got to Now: Six Innovations That Made the Modern World. In it, Johnson traces how major innovations have reshaped history in unexpected ways. One of them is air conditioning, which was invented to help out those sweaty Brooklyn printers.

"It's the middle of the summer and the humidity in the printing press room is just really intense, and so the ink is running on the page," Johnson explains. So the shop's owner called up a man called Willis Carrier — you might have heard that name — to build a kind of huge dehumidifier for the printing room.

As it turned out, "as a side product, it also makes the air a little cooler," Johnson says. "It works, it actually keeps ink from running on the page, but everybody at the printing shop is like, 'I'm gonna have my lunch in the room with the printing press.'"

Carrier started to develop his dehumidifer into the forerunner of modern air conditioners. But, as Johnson points out, "for a long time, it's not something that ordinary people experienced." Finally, after World War II, Carrier and other manufacturers started to build the small units we all know, love and probably own.

Suddenly, that means people could live in sweltering Southern cities without discomfort — or, in the case of the elderly, even heat-related death. "All of a sudden it triggers this extraordinary migration of human beings," Johnson says. "There are changes in population centers that are visible from space, thanks to air conditioners."

And of course, where people go, so do votes. "There's this big transfer of electoral college votes from the north to the south," Johnson says. "You have more conservative retirees moving to the South now because of air conditioning."

And that's where we come back to Ronald Reagan: "A very important component of Ronald Reagan's election in 1980 is kind of the Sun Belt bloc of conservative voters that just would not have existed," Johnson says, without air conditioning.

Johnson realizes the connection sounds odd on the face of it. "It sounds crazy to be like, a guy in Brooklyn is trying to stop the ink from smearing on the page and it ends up helping to elect Ronald Reagan," he says. "But it's actually just a couple of steps between those two things.

He points out another possible unexpected consequence of air conditioning: the summer blockbuster. "Until air conditioning came to the theaters, no one would want to go see a movie in the summer. It was like the last place you'd want to go, crowd into a 1,000-person room on a hot summer's evening," Johnson points out. "When they introduced air conditioning, suddenly it was exactly where you wanted to go."

Naturally, Johnson knows the by-products of innovations like air conditioning "sometimes aren't great." For instance, if hundreds of thousands of people can suddenly live in Phoenix, you then have to find a way to get them scarce water and other resources.

“One technology gets invented, which is wonderful and solves a local problem that it’s trying to solve," Johnson says, "but it inadvertently creates a new problem that we didn’t think about, which then requires more technology to solve that problem.”

Then there's air pollution, manufacturing costs and all the rest. So does Johnson think air conditioning was worth it all in the end?

"My opinion on that is directly dependent on the current temperature of the city that I'm in at that moment," he says.

This article is based on an interview from PRI's Innovation Hub with Kara Miller.