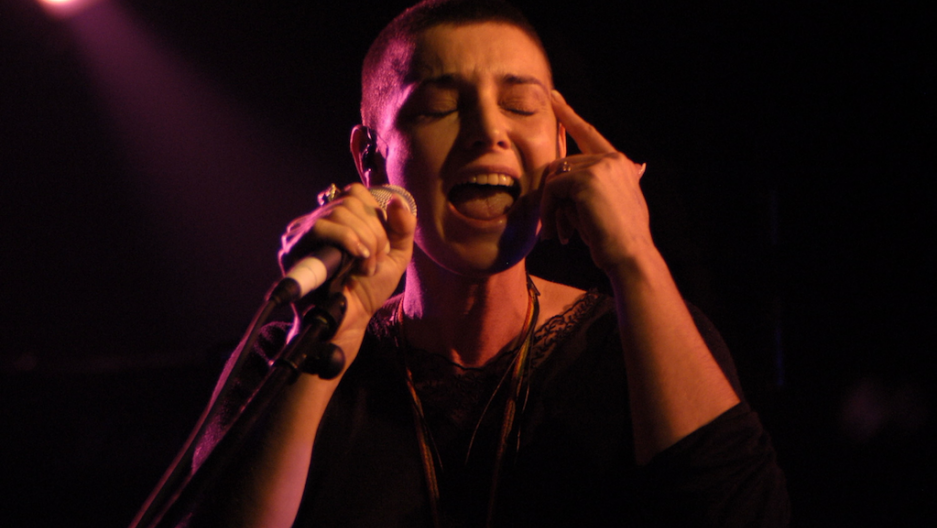 Irish singer Sinead O'Connor sings at a concert in aid of the Chernobyl Children's Project in The Tivoli Theatre on March 6, 2003 in Dublin, Ireland.
Share

Sinead O'Connor performed an a cappella cover of Bob Marley's "War" on Saturday Night Live on October 3, 1992, rewriting a few of the lyrics to address child abuse, in addition to the song's initial topics of racism and the horrors of war.

As she finished the song, she produced and tore to shreds a photograph of Pope John Paul II, shouting, "Fight the real enemy!"

In his opening monologue the following week while hosting SNL, actor Joe Pesci insisted that had he been in charge of the show, he would have given O'Connor "such a smack." This echoed an event from the previous year when O'Connor insisted that the National Anthem not be played before her concert at a venue in New Jersey. Frank Sinatra, while performing at that same venue the next night, threatened to "kick her ass."

And Jonathan King, a millionaire British television and record producer, and the executive producer of the BPI Awards, stated in an interview with Billboard that she needed to be spanked for her display of bad manners. Ten years later, King would be convicted of several counts of sexual assault on 14- and 15-year-old boys and sentenced to seven years in prison.

By then O'Connor had already earned a reputation as something of a loose cannon and a crazy woman after a series of radical public acts. And in the popular cultural memory of the United States, O'Connor remains a crazy woman. Her act of speaking out against the Catholic Church with that bold action remains for many a hysterical act. What she did was intentionally incendiary.

Blowback from destroying a picture of the pope on live national television is to be expected and, one would imagine, desired. But at the time, the Saturday Night Live incident was not well understood. At the time, the public was largely unaware of the sex abuse crisis hiding within the church.

Today the world sees with increasing clarity just how deep the Catholic Church child abuse epidemic runs. It has been well-documented that priests who raped young boys were in many cases simply moved from parish to parish, endangering greater numbers of children. Thousands of civil lawsuits have been brought against the church over five decades' worth of abuse cases around the world, including O'Connor's native Ireland, resulting in settlements totaling billions of dollars.

O'Connor illuminated these issues with an angry and haunting act on live national television 22 years ago and was issued a humor-coated, SNL-endorsed threat of physical violence in response. She was dismissed as deserving of a "smack" — more of a nuisance than a threat.

She is herself a Catholic, and claims to be an ordained priest in a breakaway version of the church. She has in recent years struggled with mental illness. O'Connor became a lightning rod for an electrical storm of misogyny early in her career (she has also publicly discussed pressure from her first record label to abort a pregnancy), and admissions of struggle with emotional instability have made her an easily dismissed character.

And yet the destruction of the image of Pope John Paul II, the sparse and passionate performance of "War," the imperative to "Fight the real enemy" collectively defined a moment of expression that was brave, intentional and visionary — not insane. It was a public moment that should remind us that art remains a vital force, able to incite and to elucidate. It was a moment that should remind us that there are threads running through the fabric of culture which run counter to the pattern.

Early this year, pop culture maven Tavi Gevinson gave an interview with the Chicago Public Radio-produced Nerdette Podcast, speaking about what she sees as a merging of mainstream pop culture and underground sensibilities.

A little over a week before Gevinson made that statement, the Internet was ablaze with a viral transcript of the radical Grammy Awards acceptance speech that Lorde had reportedly delivered and which was allegedly censored by the broadcasters. In this account, in lieu of a traditional acceptance speech Lorde had launched into a lecture on the evils of a transnational global capitalist oligarchy, citing Naomi Klein and Chris Hedges. But it was a hoax.

There was no censored, radical action from Lorde at the Grammys. So it was the fantasy of Lorde's revolutionary act that went viral.

In 1989, however, Sinead O'Connor really did appear on the Grammys to sing the Alex Haley-inspired "Mandinka" with the hip-hop pioneer Public Enemy's crosshairs logo drawn on the side of her shaved head. And in 1991, while she was at the top of the charts, selling millions of records, she really did boycott the Grammys altogether, declining to accept her award for Best Alternative Music Performance on the grounds that the ceremony celebrated "mostly material gain" and did not address deeper social issues.

And in October 1992, she really did destroy an image of the pope on national television. O'Connor exemplified the kind of merging of mainstream culture and "underground" or radical ideas that Gevinson is talking about.

As a Catholic, she tore apart the picture of Pope John Paul. She appeared on The Arsenio Hall Show the day before the Grammys to talk about her boycott. She was engaged in these institutions even as she battled against them.

After a long hiatus from the public eye, O'Connor reemerged in 2012 with a new album and last year she published an open letter to 21-year-old pop star Miley Cyrus, which said in part, "Nothing but harm will come in the long run from allowing yourself to be exploited."

Releasing another album this year, she has continued to criticize the Catholic Church, lambasting limited reform efforts by Pope Francis.

O'Connor cannot obtain a position of power within the church, owing to the fact that she is a woman. But neither can she, it seems, obtain any sort of substantial position in the countercultural memory either.

Reruns of that October 1992 episode of SNL do not air O'Connor's performance — that performance has been replaced by a rehearsal take wherein she merely holds up a photograph of a child at the end of the song. The original performance, however, can be seen on YouTube.

Perhaps it is indeed the case, as Gevinson said, that "something has happened in these past few years."