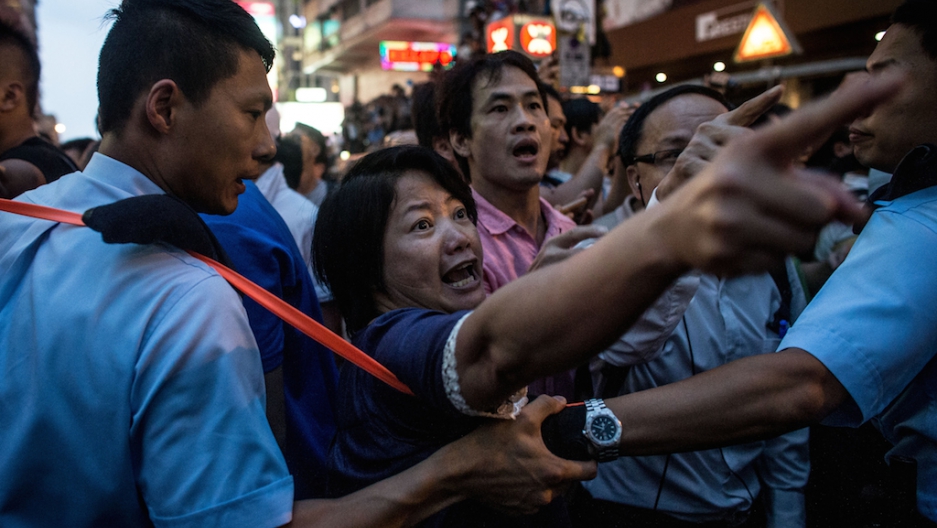 Despite protesters' fears that a crackdown would come again in the form of tear gas and pepper spray from police, it was ultimately fellow citizens who attacked, tearing down fliers, tents, and encampments, and in some cases beating the students themselves.

And this is what it feels like to be one man surrounded by an angry mob. He is silent. pic.twitter.com/bpQ4k9QVBS

Another protester leaves, is surrounded, sucker punched in the ribs by an old man

The worst hostility occurred in the dense commercial district of Mong Kok, the site farthest from the center of the occupation in the city's downtown. For days, protesters had occupied several hundred yards of Nathan Road, usually one of the busiest shopping strips in Hong Kong.

On Friday afternoon, hundreds of people, many of them middle-aged men, surrounded the students' camp and began pumping their fists, shouting, "Clear out! Clear out!" Several made attempts to charge the camp and pull down the tentpoles, while others threw water bottles and cheered any sign of a break in the line.

The crowd quickly swelled, dwarfing the handful of police officers who marked a cordon around the camp. Fights broke out on the packed sidewalks between women wearing yellow ribbons, the sign of support for Occupy Hong Kong, and blue ribbons, a recently coined symbol of the counter protest.

Second tent violently ripped down. Students raise hands in the air to show they are not fighting. Crowd cheers. pic.twitter.com/yFC9WCpFb7

Who were these people?

And why have they taken such radical means to end the protests?

Some point to the influence of mainland China, speculating that thugs could have been paid to attack the protests and break them up. But many ordinary Hong Kongers also had reservations about the movement. GlobalPost interviews with half a dozen anti-Occupy sympathizers at Mong Kok, all who denied they were paid or affiliated with an organization, showed that complaints about the economic and transportation impact of the protests weighed heavily — as well as suspicions that the protesters were being manipulated by shadowy forces from abroad.

On the street, a man wearing an oxford shirt and slacks who refused to give his name said the students were hurting his business, a shop on Nathan Road. "My expenses are one million a month. They can go to a different place — I don't care. I don't agree with this."

Similar complaints motivated Alan Jin, a local resident who said, "I support democracy, but this is too long." Nearby, Mr. Meng, man handing out blue ribbons from a bag said, without being asked, "I'm not here with anyone, I'm here by myself," and added, "we want our society to become organized. They should follow the rules. The rules are why we are successful in Hong Kong."

Mr. Mok, a pale elderly man in a cap, emphasized that clearing the streets was what any city would do. "They have blocked the street for days. What would your government do? There are businesses here. People living upstairs are disturbed by the noise. The basic thing is a lack of trust on both sides." He also voiced a common suspicion among anti-Occupy sympathizers: "People are using them, these teenagers, to fight the government. They are educating people 14, 15 years old to fight. They are being ordered." When asked who, he pointed toward the protesters' tent, where foreign reporters were filming the crowds. "Other people."

A man named Lee shopping in the area with his wife echoed this view. "I don't think this is just a student activity. I think there are others. I support democracy in certain circumstances. But like this? This is only for themselves. I cannot do shopping, I cannot find restaurants. You understand. "

Though the reasons for anger sound mundane, many of the counter-protesters — even those who were not violent — expressed resentment verging on hostility. One elegantly dressed young woman, when asked why she was repeatedly shouting a chant at the students, answered: "There are people who support democracy, and people who support the police. They blocked the road five days. I support the police to use force."

Of course, in the end it wasn't the police who used force, but the counter-protesters themselves. Outnumbered and unarmed, many of the protesters left Mong Kok with their hands raised, weaving through the hostile crowd. None observed by GlobalPost fought back.

Also saw mob adopt the hands-raised pose when surrounding students. Scream in their face, bump w/ bodies, make a mockery of the gesture.

Thank goodness those terrible freedom buses have been denuded of all their pesky fliers pic.twitter.com/YK1qeYIlZC

Man reattaches one flyer with an umbrella. I ask why. "I support students. Too many communists here to fight them." pic.twitter.com/XEoooIYuI6