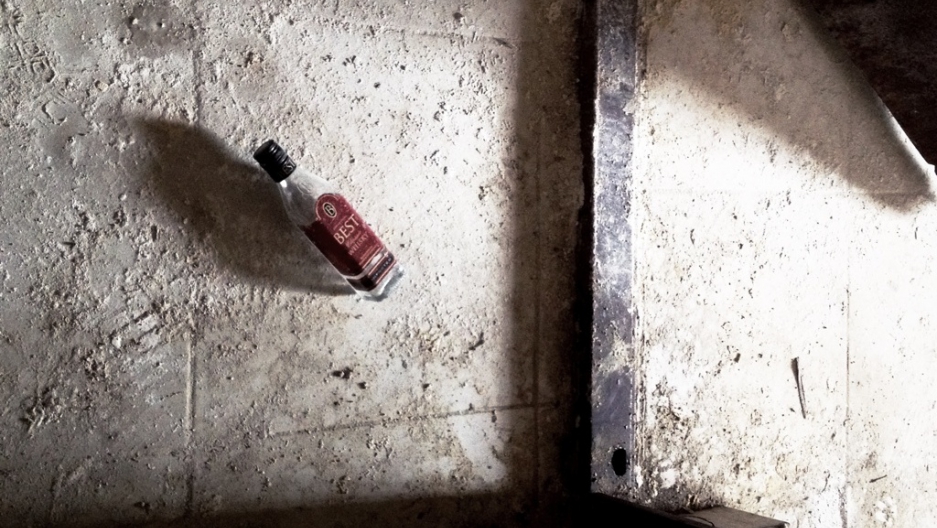 A small bottle of cheap 'Best' whiskey lies on the floor outside the trashed pediatric ward of the hospital of Malakal, South Sudan.
Credit: Tristan McConnell
Share

Editor's note: This story was first published on Oct. 3, 2014. GlobalPost is featuring it again as one of our must-reads of 2014.

MALAKAL, South Sudan — This ruined town has changed hands six times since December, when South Sudan’s latest civil war began. Each time it has been shot up, looted, vandalized and further emptied of residents.

So when news arrived recently of more nearby clashes between government and rebel forces, it triggered a flurry of fearful and warlike activity in the shattered town.

Soldiers clutching AK-47s piled into pickup trucks, which sped off, bumping along the rutted mud roads. Hundreds of civilians, meanwhile, trudged out of town to seek shelter at the nearby United Nations base, joining the 18,000 others who have lived there since South Sudan’s civil war arrived in Malakal on Christmas Eve last year.

Malakal is the capital of the Upper Nile state, which the United Nations says has endured the brunt of the nine-month civil war. Citing satellite imagery, Human Rights Watch said by April a quarter of the town had been destroyed.

Even for the civilians who made it out of Malakal and reached the UN base, there was little relief from conflict. Inside, peacekeepers used tear gas to separate gangs of young men from opposing tribes who had set upon each other with sticks, rocks and machetes.

Malakal was once a busy trading post and cultural crossroads on the Nile, linking what used to be Sudan’s north and south. Now long grass has reclaimed parts of the town. Yellow flowering creepers are swallowing the skeletons of burned houses. Offices, hotels and homes have all been looted. View of Malakal mosque and a burned part of the hospital. Tristan McConnell/GlobalPost

So too was Malakal Teaching Hospital, which was also the scene of one of a litany of horrors suffered by the town and its inhabitants. Dr. Stephen Akwot, the hospital’s director general, said that 11 patients were shot dead in their beds in February, including a mother and her newborn child.

For a period of time, feral dogs ruled the abandoned streets. Roaming in packs, they grew fat on the scattered corpses of dead civilians and soldiers. Many of the dogs have since been poisoned, or shot.

If it’s hard to imagine anything worse, imagine this: In January, when more than 300 people tried to flee this horror by boat on the Nile, the boat sank, killing almost everyone on board.

Not a single person from Malakal is untouched by violence.

Angelina Nyachuong fled when a tank shell demolished her neighbor’s house. She is blind, so she reached for her 15-year-old daughter’s shoulder and together they ran. Now she lives in a cramped, sweltering tent inside the UN base with her five children. Her youngest, a two-year-old girl, recently dozed fitfully on a mat, flies settling all over her tiny body.

When it rains, Nyachuong’s shelter — like all the others — fills with water. The entire camp turns into a blight of thick mud.

Nyachuong lived through the decades-long civil war between the north and south. But she said this conflict is worse: Divided by politics and tribe, South Sudan President Salva Kiir and his former deputy Riek Machar are destroying their country and their people.

The violence has been brutal. Rape is widespread, ethnic massacres are commonplace, and the use of child soldiers is routine. Four million are hungry. About 1.3 million — like Nyachuong — have been forced from their homes. Everyone is expecting a poor harvest. So famine might be next.

More than 30,000 of Malakal’s residents found their way upriver to Wau Shilluk, a sleepy village of mud and grass huts that is now engulfed in hastily built shelters.

David Koud, a 36-year-old civil servant, lives in one of these structures. In Malakal he owned two houses and two cars. “Life was good,” he said. But all that is gone now. In the chaos of fleeing Malakal in mid-February, he lost contact with his family.

A week later he ventured back armed with a Kalashnikov he found abandoned on the roadside. He did not find his children, but he did find his younger brother, 22-year-old Juma: he had been shot and killed in his bed. Also in the room were the corpses of four other men whom Koud didn’t recognize.

With rebel fighters swarming the town, Koud snuck away, filled with anger and grief. When he returned six weeks later it was to collect and bury his brother’s bones. Still his family was missing.

“During those months I was like a madman. I had lost everything. I had no hope they were alive. A person can no longer be human when these things happen,” he said.

But in July, news came that his wife and children were safe with relatives in a remote village. Today they live together again in their makeshift home.

Like so many South Sudanese, Koud had welcomed the end of the long war with the north in 2005, had voted for secession in early 2011, and had celebrated independence in July the same year. Despite the hardness of life, those years were filled with hope.

All that is broken now. Koud wants nothing more from his country or its leaders.

“The rebels and the government: they are all the same,” Koud said. “Every day civilians die, but Salva and Riek stay in nice hotels and their children are safe.

“There is no good future here.”