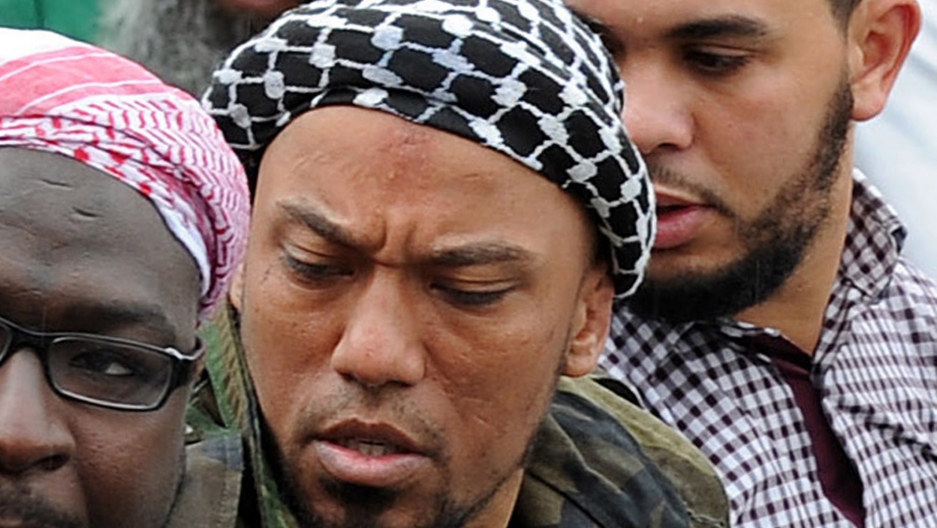 BERLIN, Germany — When hooligans attacked Israeli soccer players in Austria this summer, few paid much attention to the matching sweatshirts they were wearing.

They were emblazoned with an image of crossed scimitars common in Islam together with the German phrase for “I'm staying ghetto,” made famous by a rapper named Kurdo.

For some, it provided new evidence that in Germany and across Europe, a connection is emerging between the hip-hop scene and a radical Islamist movement pushing for Sharia law.

“For a generation that’s growing up with social media, with smart phones, with the internet in general, it's easy for the Islamic State to radicalize young guys,” says Florian Flade, an expert on radicalism.

With new details surfacing almost daily about the growth of the radical Salafist movement here, news about German jihadis fighting for the Islamic State, or IS, is prompting a renewed debate over the integration of Muslim immigrants. But hip-hop fans and musicians say it’s part of a wave of sensationalism that’s stoking latent Islamophobia in a society still wrestling with the notion of multiculturalism.

Germans have been struggling for years over how to respond to the angry language and glorification of violence prevalent in a strain of hip-hop music originating in Kreuzberg, an immigrant-dominated neighborhood of Berlin that’s sometimes dubbed “Little Istanbul.”

Rappers such as Anis Ferchichi, born in Bonn to a Tunisian father and German mother and better known as Bushido, have drawn criticism for anti-Semitic and homophobic lyrics.

Vulgar slurs have sometimes joined superficial references to Islam or radicalism, including in Bushido's 2009 song “Taliban.”

But now IS is embracing the tools of pop culture to draw recruits. Among its arsenal here is a former rapper named Denis Cuspert, aka Deso Dogg, who in 2013 emerged as the German face of jihad.

After appearing in numerous propaganda videos for Al Qaeda and IS, Cuspert was reportedly killed in April, although IS subsequently denied those reports.

“As a rapper, he had only a little success,” says Freiburg University's Andreas Armborst. “But now he is a household name because his face is splashed across the pages of the [tabloid] Bild Zeitung.”

Together with the attack against Jewish soccer players in Austria, German protests against the Israeli occupation of Gaza this summer exposed a deep current of anti-Semitism among Muslim immigrants. Chants included “Jew, Jew, cowardly bastard, come out and fight alone!”

The number of German citizens and residents joining the Salafist movement has tripled from around 1,800 members in 2011 to more than 6,000, according to a recent report by Germany's domestic security agency.

As many as 400 radicals have traveled to the Middle East for combat training and fighting, prompting a police crackdown that this week resulted in raids on homes across Germany and the arrests of several suspects accused of fighting for IS in Syria or funding propaganda videos.

But some Muslims here say public alarm is making it harder to tackle the problem.

They see a stark contrast between the immediate leap to intercede against anti-Semitism during the protests this summer and the official reaction to more than 80 attacks against German mosques since 2012.

Every major news outlet and politician weighed in to express their dismay over the anti-Semitic chants, including Chancellor Angela Merkel, they argue. But when a mosque is set ablaze or when Muslims are attacked and killed — such as in a notorious series of murders allegedly perpetrated by the far-right National Socialist Underground between 2000 and 2007 — the initial official reaction tends to deny prejudice as a motive.

At the same time, hip-hop musicians and fans — as well as German Muslims — caution that sensationalist media reports are creating a climate of hysteria that’s making it more difficult to reach the country's alienated minorities.

News reports about Cuspert — a former Kreuzberg resident born to a Ghanaian father and German mother — made him out to be a big rap star, even though he never achieved much prominence during his short-lived career as Deso Dogg.

After his conversion, Cuspert denounced the music and excoriated his former lifestyle.

That says as much about audience prejudices as it does about hip-hop, says Olad Aden, a social worker who uses rap workshops as a way of reaching Berlin street kids.

“I’m dismayed that several media outlets have highlighted the fact that some of these, for lack of a better term, 'sick' individuals within these terrorist organizations have been 'rappers' in the past,” he says. “Undoubtedly they have been many other things as well.”

The music industry may be partly to blame.

Despite his controversial lyrics and lifestyle, Bushido was awarded Germany's prestigious Bambi award for “successful integration.”

More from GlobalPost: The 'benchies' of Edinburgh have something to say

Iranian-German rapper Kaveh Ahangar says the industry marginalizes moderate rappers “who have a critical text against the US foreign policy, the Israeli occupation or structural racism in Germany.”

Instead, “the only people who get a platform are gangsta or middle-class rappers who rap about issues that are quite banal.”