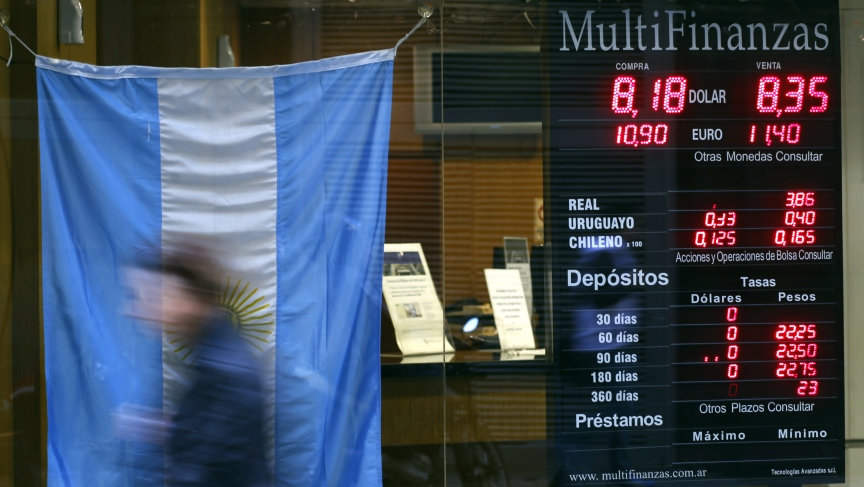 A woman walks past a currency exchange store with an Argentine national flag on display in Buenos Aires' financial district on August 14, 2014.

More than 10 years after it defaulted on its debt in 2001, Argentina is still feeling the effects. But the pressue is coming from a seemingly odd place: the US court system.

That's because while most of Argentina's creditors agreed to restructure the country's debt after the default, accepting only about 30 percent of the money owed, there were some holdouts. Prime among them were hedge funds based in New York.

True to American tradition, they sued Argentina in New York court, and the court backed the hedge funds. They say Argentina is on the hook to the hedge funds first, meaning the country can't pay off its other, more manageable debts. But how does a court in New York have so much power over a sovereign state?

Actually, says Anna Gelpern, a professor at Georgetown University Law Center, "it's pretty simple. [Argentina] agreed to do it under US law."

Gelpern says it's common for countries that can't raise money from foreigners under their own laws and currency to borrow it from others. The judge in New York can't change the fact that Argentina has a debt and that it has to pay it — there is no bankruptcy law for sovereign states.

But she does say that the judge has created problems by ruling that Argentina must pay the hedge funds first. That means, at least for now, that no one is getting paid at all. Argentina simply doesn't have the money to pay the funds the full debt, let alone satisfy everyone.

Gelpern believes this case won't have an immediate affect on the global economy, but there are still possible negative consequences.

There's also the chance that countries trying to restructure their debt might find fewer creditors willing to help out. Because of the ruling, Gelpern says, they risk not only taking a smaller settlement but losing any payments at all.

"The biggest incentive of negotiating a debt restructuring with a country is certainty," Gelpern says, "and all of the sudden you lose certainty by this lawsuit."