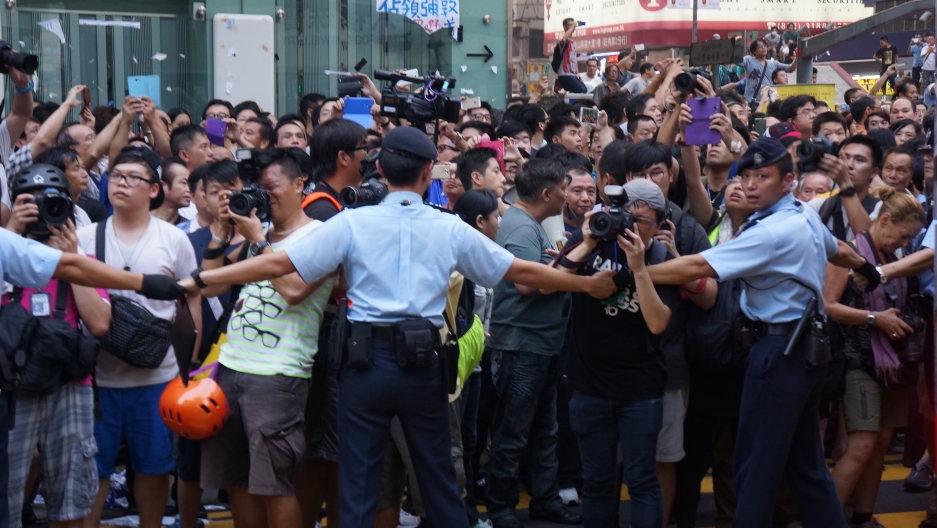 Police regain control after an elderly man is involved in scuffles. Tom Grundy/GlobalPost Pro-democracy activists link arms to protect the camp — many intended to remain in the streets indefinitely. Tom Grundy/GlobalPost As the crowd surrounding the protest camp surges forward, police support each other to push back. Tom Grundy/GlobalPost An officer appears carrying red and yellow warning banners which are used to tell protesters when police intend to use force. Tom Grundy/GlobalPost Superintendent Tate (right) discusses the situation in Mong Kok with a fellow officer. Earlier, Tate asked people to avoid the area. "We always use a tremendous amount of restraint,” he said, when asked about police plans. Tom Grundy/GlobalPost An officer faces onlookers. He carries red and yellow warning banners used to caution protesters when police are about to use force. Tom Grundy/GlobalPost As pro-democracy protesters are given the option to leave, some anti-Occupy Central activists heckle and lash out at those being escorted from the area. Tom Grundy/GlobalPost A man is tackled to the ground by several police officers. More than a dozen photographers and reporters surround them. Tom Grundy/GlobalPost Another man is escorted from the site. Police removed those involved in altercations as well as pro-democracy demonstrators who requested to leave. Tom Grundy/GlobalPost As the anti-Occupy Central activists disappear, a sign calling for universal suffrage reappears at the protest site. Earlier, many protesters had removed their symbolic yellow ribbons fearing that the protest camp may be stormed. Tom Grundy/GlobalPost Remnants of the Occupy Central site lie on the roadside after a group opposed to the movement tore through the sit-in encampment, destroying tents, tearing down banners and scuffling with protesters. Tom Grundy/GlobalPost Near midnight, it begins to rain as onlookers offer to share their umbrellas with police. As the night wears on, thousands of people supportive of the student protesters surround the area. Tom Grundy/GlobalPost