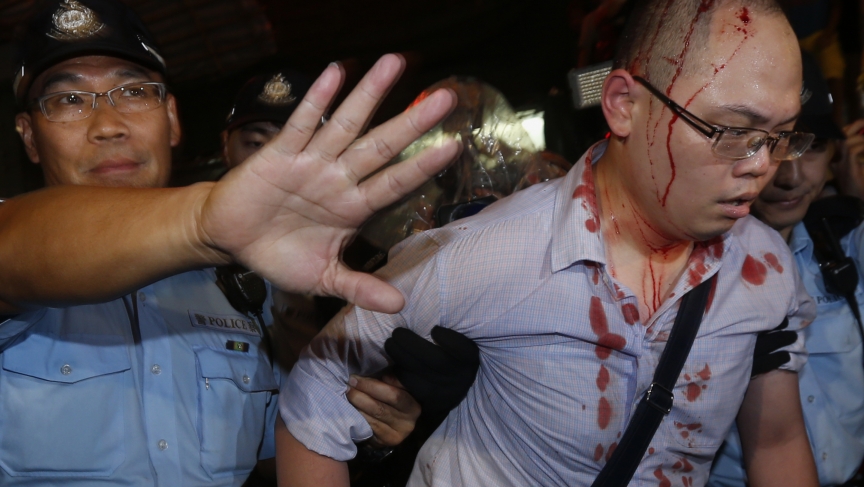 A policeman helps an injured pro-democracy protester to leave after he was beaten by a group of anti-Occupy Central protesters at Hong Kong's Mongkok district October 3, 2014.

What a difference a day makes. On Thursday, protesters in Hong Kong were celebrating a tentative deal to meet with government officials to discuss electoral reforms.

But those talks were canceled on Friday after mobs of people fought with protesters and tried to drive them from the streets they had occupied in one of Hong Kong’s main shopping areas.

“People here are fully convinced that a lot of these people are paid thugs, paid by the political opposition, to come out and stir up trouble,” says The World’s Matthew Bell who is reporting from Hong Kong.

The Hong Kong Federation of Students, one of the groups leading the protests, said they saw no choice but to cancel the meeting with government officials.

"The government is demanding the streets be cleared. We call upon all Hong Kong people to immediately come to protect our positions and fight to the end,'' the group said in a statement.

They also demanded that the government hold someone responsible for the scuffles Friday.

“The scenes are pretty ugly — of fighting, people getting beaten [up], some of these barricades were pulled down. And large parts of a couple of the sit-in protests in two areas seem to have been dismantled,” Bell says.

The protests have been mostly non-violent since police used tear gas and pepper spray on the crowds last weekend. And just as those aggressive tactics ended up drawing more people into the streets, the attacks on Friday drew more supporters to the streets to defend the protest camps.