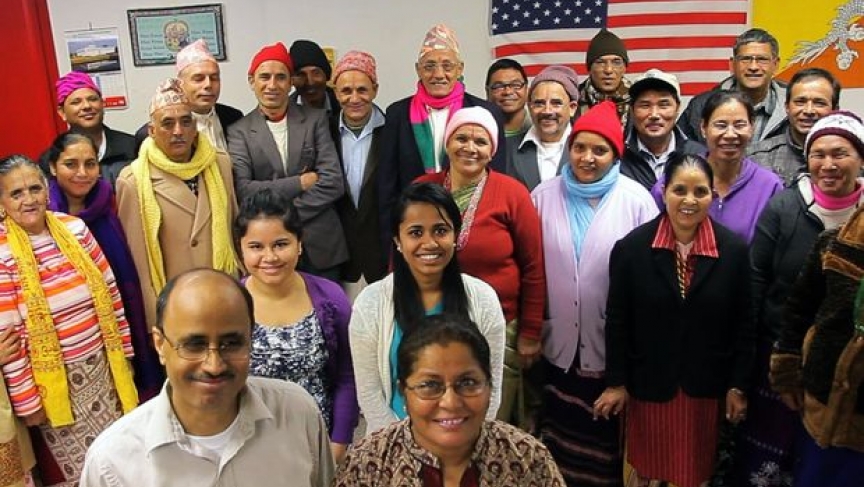 Former refugee Birendra Dhakal poses for a picture with his citizenship class in Clarkston, Georgia.

Demographics in the United States are changing rapidly. By the year 2043, we will be living in a majority non-white nation, according to projections by the US Census Bureau. The impact of that shift underway in the country’s racial and ethnic makeup is the subject of a new documentary series called “America by the Numbers.”

“The whole premise of [this series] is the numbers,” says Maria Hinojosa, the anchor and executive producer of the series. “At this point, I’ve visited all 50 states and two territories, so I’ve been seeing this ‘diversity’ everywhere. People talk about the tipping point for becoming a majority non-white country in America in 2043. It’s actually happening sooner — it’s happening now.”

The series parses the data behind this historic shift to reveal a variety of changing communities.

“The South actually has experienced the most intense, multi-cultural growth in the past decade — more than any other place in the country,” Hinojosa says. “We found, by the numbers, the most diverse square mile in the South. It is in Clarkston, Georgia, about 10 minutes south of Atlanta.”

Clarkston was once a meeting place for members of the Ku Klux Klan, but now it is home to residents from around the globe, including thousands of former refugees who moved there as part of a resettlement program.

“It’s like the future of America on steroids,” says Hinojosa. “There are people from 60 countries, there are dozens of languages, religious backgrounds and experiences.”

But not everyone is happy about the city's transformation. Graham Thomas, a longtime resident of Clarkston, told Hinojosa that he thought that “people that came up through Ellis Island were somewhat more educated and ready to fit the society."

"I think what we’re getting with the refugee program is people that are not ready to fit in,” Thomas added. “They haven’t got an education, they don’t have a trade, and they have a lot of kids. That’s the talk of the town.”

“He feels really left out — he doesn’t understand it all,” Hinojosa says. “We understand that. Change is hard. On the other hand, three former refugees decided to run for office. We documented the first-ever Bhutanese American in the history of the United States to ever run for anything. He lost by just over a dozen votes.”

About 30 years ago, Clarkston had a population that was about 90 percent white. Today, that figure sits at about 20 percent, which is why individuals like Ibrahim Sufi, the Bhutanese-American mayoral candidate, are taking to city politics.

“City government hasn’t built the relationships with the community. They haven’t tried, and if they’ve tried it hasn’t worked,” he says.

Sufi isn't the only one — two other refugees ran for city office, and Somali-American Ahmed Hassan was even elected to the Clarkston City Council.

Despite their differences, Hinojosa says people in the community are getting along with each other and are growing through this experience.

“The people of Clarkston are realizing that they have a pretty amazing and unique American story,” Hinojosa says. “What’s fascinating about Clarkston is the number of people who are actually involved. They go to the town hall meetings, they go to the city council meetings, and this past election we saw the highest voter turnout.”

And this trend isn’t new, Hinojosa says. She points out that during the first 10 years of the 21st century, the U.S. population grew by 9.7 percent, and people of color accounted for 91.7 percent of that growth.

“In a mainstream American media that is in and of itself not diverse, then the story of change and diversity is told through a certain perspective,” she says. “I think sometimes that perspective is, ‘Uh oh. This is scary.’”

But Hinojosa suggests the American people shouldn't fear a country that is changing.

“That America is already here,” she says.

“America by the Numbers” airs on PBS beginning Saturday. This story first aired as an interivew on PRI's The Takeaway, a public radio program that invites you to be part of the American conversation.