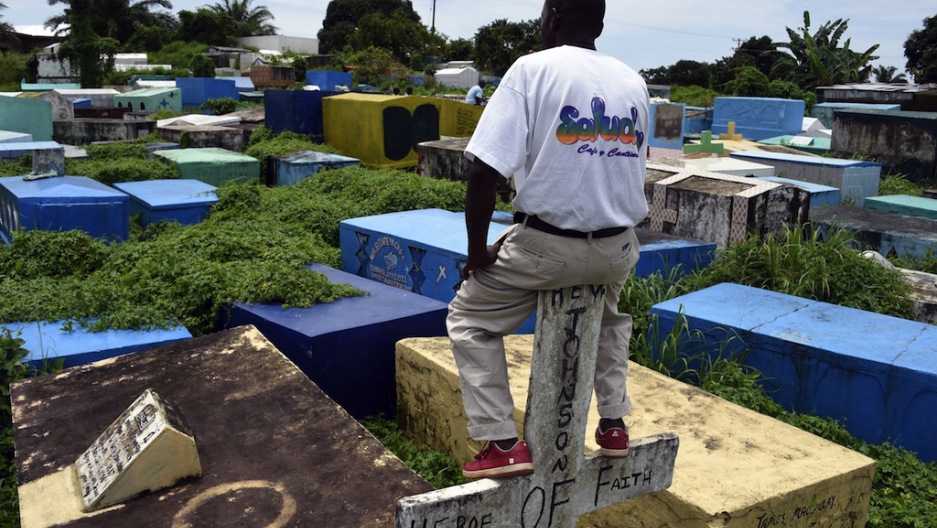 A man sits on a cross in the Tweh farm cemetery on September 30, 2014 in Monrovia, where burials have been halted due to the Ebola outbreak.
Credit: Pascal Guyot
Share

EVANSTON, Illinois — As a crowd recently stoned local officials and health education workers to death in Guinea, American households were tuning in to the PBS documentary series, "The Roosevelts."

Himself the victim of a debilitating disease and a chief executive during the international crises of the Great Depression and World War II, Franklin D. Roosevelt held an unwavering commitment to mobilizing government to better the lives of the governed. Memory of his record evokes comparisons and criticisms of national and international leadership contending with the Ebola outbreak in West Africa today.

In his first inaugural address, in March 1932, Roosevelt famously spoke of a leadership he believed essential to inspire public confidence and national unity: “The only thing we have to fear is fear itself.”

Such fear, he continued, was a “nameless, unreasoning, unjustified terror which paralyzes needed efforts to convert retreat into advance.” With these powerful words, FDR reminded Americans that their support of him was necessary for him to lead the country out of the Great Depression.

“In every dark hour of our national life, a leadership of frankness and of vigor has met with that understanding and support of the people themselves which is essential to victory,” he said.

In Sierra Leone, Liberia, and Guinea, the countries most affected by the Ebola virus, trust in government by the governed was low when the Ebola outbreak began early this year. Lack of deep trust was the result of decades of corruption and illicit financial outflows, and has grown along with the spread of the disease.

Distrust compounded by death and disease is combustible, influencing such behavior as the stoning deaths of local officials and community health workers. It is also manifested in the refusal to follow government edicts against traditional burial ceremonies that require the washing of a person dead from Ebola, and the disregard of last month’s quarantine of the West Point neighborhood of Monrovia, the capitol of Liberia.

In acknowledging the low regard in which the people of these countries hold their governments, the UN Security Council recently encouraged the three governments to be “credible and transparent” in their efforts to combat the virus.

While corruption occurs worldwide, its impact is hardest on those who can afford it least.

The World Bank ranks Sierra Leone, Guinea and Liberia among the 25 poorest countries in the world. Both corruption and poverty have been exacerbated by civil conflict in the region. In Liberia, for example, former president and convicted war criminal Charles Taylor misappropriated more than $100 million of the country’s funds while in office.

Today, the countries worst hit by the Ebola outbreak rank low on the Corruption Perceptions Index, which measures the perceived graft of 177 countries and territories. On that list, Guinea ranks 150, Sierra Leone is 119 and Liberia is 83 — a collective ranking of 117.

Moreover, corruption in these countries has long included, but is not limited to, the healthcare sector. Transparency International estimates that almost one in five people worldwide have paid a bribe to gain access medical services.

With the outbreak of Ebola, an atmosphere of cynicism and suspicion are the consequences of decades of abusing the public trust. In order to contain the epidemic, national governments need accurate reporting of illness and death; effective isolation of those infected; quarantines, if necessary, to prevent transmission, and extraordinary sanitation measures.

In addition, these governments must address the economic impact of the outbreak that will be felt for years. They must learn to manage diminished resources such as harvests reduced by the death of farmers that results increased food prices. The governments also must deal with decreased trade in local, national and international markets, the cancellation of commercial flights and the closure of schools and businesses.

In plotting the long road to recovery from the Ebola epidemic, how can governments win the confidence of their people?

To start, governments should publish accurate health budgets and related financial information, including the financial and human resources committed to Ebola. Health workers and other government employees must be paid a living wage, all the more so when treating a deadly virus. Fair wages are more likely to insulate workers against bribes offered in exchange for services.

Democratic governance free from corruption and patronage at the local level, as well as the national level, can yield leaders that inspire trust.

Leadership of frankness and vigor has been sorely lacking for too long in West Africa. Now it is needed more than ever.

Juliet S. Sorensen is a professor at Northwestern Law School, where she teaches Health and Human Rights and Public Corruption and the Law.