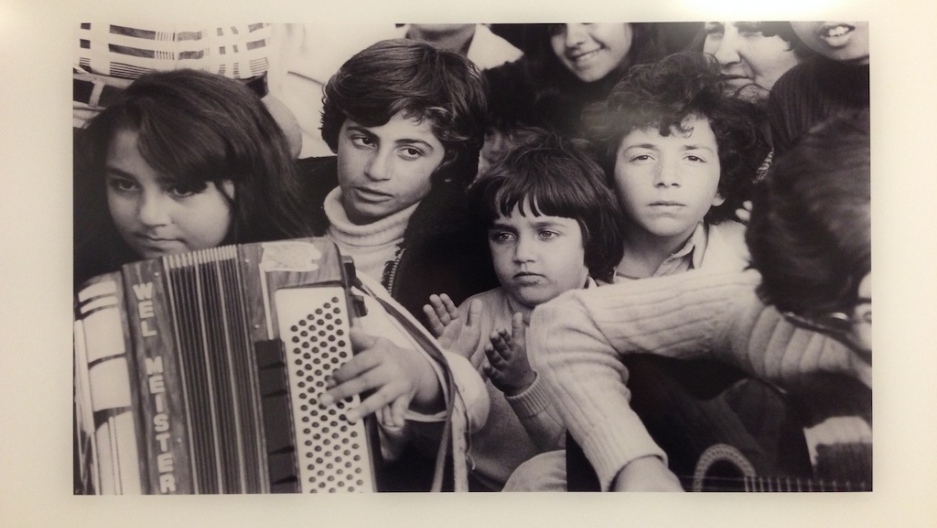 Jean Mohr's photograph of refugees in Cyprus on display at The Fletcher School of Law and Diplomacy in Tufts University.
Credit: Ambika Kandasamy
Share

Thousands of Syrian refugees are streaming over the Turkish border this week after their towns were overrun by Islamic State militants. And millions more are enduring a brutally violent civil war, which has killed more than 191,000 civilians and displaced more than three million people from their homes, according to data from the United Nations.

In the 150 years since the signing of the first Geneva Convention, which laid the groundwork for international humanitarian laws, the world has only become more dangerous for both civilians and the humanitarian aid workers helping them.

That's according to Martin Dahinden, director of the Swiss Development Agency in the Department of Foreign Affairs and designated Swiss ambassador to the United States.

"The number of civilian victims is frighteningly high, regardless of whether we look at the conflicts in and around Syria or elsewhere," Dahinden said during a recent talk at Tufts University’s Fletcher School of Law and Diplomacy. "The number of dead makes the reality of war tangible only to some extent. The wounded are far greater in number and providing assistance to them is frequently difficult in conflict situations."

Respect for humanitarian law is also swiftly deteriorating, he added.

Dahinden says the plight of civilian victims is often underreported.

"It's a time where we have to stand up against violations and raise a strong voice as it has been done 150 years ago when there was almost nothing," he said. "Civilians went through hell during war without any support. There was nothing. No respect. We are in a different world but we need to rethink the principles."

GlobalPost talked to Dahinden about the impediments to providing humanitarian aid in strife-torn regions around the world.

What are some of the challenges in delivering humanitarian aid on the ground in conflict regions?

The emblems are not respected — Red Cross, Red Crescent emblems — and therefore the possibility to provide aid in an impartial, neutral way has become more difficult. In some areas, there are even attempts to use humanitarian aid to achieve political or military objectives.

So what has led to a lack of respect for aid workers in war zones?

You find in many places people involved in armed conflicts don't have the ambition to become respected parts of the international community. This is a big difference to old type of wars between states and also the big difference with the conflicts at the end of the colonial period where national liberation movements had the aspirations to become respected governments. And so they refrained from doing certain things.

If you have armed groups that will probably never achieve some sort of statehood, you have a completely different situation on the ground.

And what are some of the long-term challenges for victims of war to re-integrate into new societies?

What we have seen is that more and more of the conflicts we are dealing with are protracted conflicts which means conflicts where you do not see an end to hostilities in anytime soon. And of course we need to bring development activities closer to the humanitarian activities. We cannot limit ourselves to provide, food, shelter and medical services. We need to look at how in those very difficult situations, society can develop, jobs can be created and society can be built up. And this is not how humanitarian aid used to work.

Humanitarian aid usually focuses on the victim and the immediate assistance: How can I help a person in desperate need? It didn't look at how societies, economies and environments should look like in five, 10 or 15 years from now.

We know we need to break down silos in thinking and there we are challenged to some extent, without being in a position to put the solutions on the table.

Are there any examples in which the humanitarian and development sectors worked together?

In Nepal, during the civil war, we tried to continue to stay engaged with the development workers. Switzerland was almost the only country to continue to work even in the areas that were controlled by the Maoists rebels.

In a similar way, during the conflict in Mali in western Africa, we adapted our development programs when the conflict became very intense. We did not limit development cooperation to humanitarian aid only, but we tried to continue to stay engaged and then to add humanitarian elements to our program. This is an enormous challenge.

Usually you have to look at security issues, withdraw from some areas, bring other knowledge in, readapt your whole planning, but it's basically the only way how you could do something meaningful.

Dahinden also discussed the War from the Victims' Perspective photo exhibit featuring works by Jean Mohr, a Swiss photographer who documented lives of victims in conflict regions around the world, at the talk, which was co-organized by swissnex Boston.

Jean Mohr's photograph of refugees at a camp near Larnaca, Cyprus in 1974 on display at the War from the Victims' Perspective photo exhibit at The Fletcher School of Law and Diplomacy at Tufts University. Ambika Kandasamy/GlobalPost

A refugee from eastern Ukraine sits in a refugee camp near the Ukrainian city of Donetsk on Aug. 18, 2014. Dmitry Serebryakov AFP/Getty Images

What was the inspiration to bring Mohr's exhibit here?

The immediate rationale is that we have the 150th anniversary of the Geneva Conventions — the first real instrument in international humanitarian law that tried to introduce rules and principles in armed conflicts. There, Switzerland played an important role. And to commemorate this, we worked with a person [Mohr], formerly from the International Committee of the Red Cross who afterwards became a professional photographer, and created this exhibition.

These are not the kinds of photos where you are shocked or where you are left with images in your mind that will not let you sleep at night.

But these are interesting pictures because they are telling you stories, and you have to discover the stories. It's not a kind of photography that exposes the victims too much. Very often you have images that are shocking. It's not this; it's almost hidden messages.