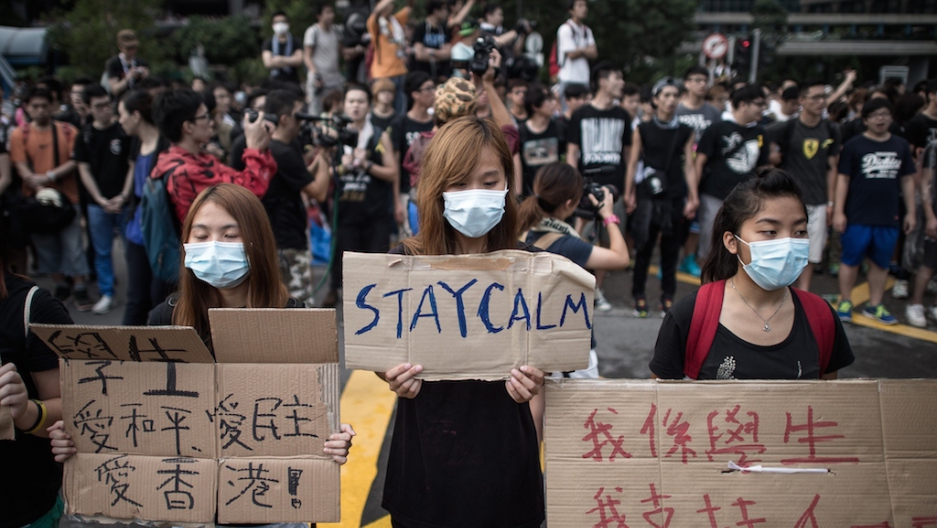 HONG KONG — If the US wants pro-democracy protesters in Hong Kong to have a chance of winning Beijing's ear, the best thing to do may be to watch closely, but stay quiet.

While the White House has avoided declaring outright support for the Occupy Hong Kong movement, it has increasingly hinted at sympathy for the demonstrators' demands. Analysts say this risks backfiring not only on Washington, but on the protesters themselves.

Initially, the US was circumspect in its comments on the thousands of students who have flooded the streets of Hong Kong.

On Monday, the US Consulate said it supported freedom of assembly, but added, "we do not take sides." The business community took a similar approach. The American Chamber of Commerce in Hong Kong, a powerful organization representing private enterprise, urged dialogue and a return to "the usual stability" of business operations.

But as the protests have grown, Washington has more strongly suggested support for the pro-democracy demonstrators.

This week spokesmen for the White House and State Department said that the US stood with protesters' demands for "genuine choice" in electing their leaders. On Wednesday, Secretary of State John Kerry is meeting with his Chinese counterpart in Washington, where he is expected to bring up Hong Kong's demands again.

The White House also issued an official response to a petition, signed by nearly 200,000 people, in which the administration called for Hong Kong to have "a genuine choice of candidates" in elections.

All this may be commendable, but it also carries risks for the movement.

At a time when Beijing is especially paranoid about "foreign meddling" in its affairs, associating Hong Kong's homegrown protest with the United States could make it more difficult for students to win concessions for their local grievances.

The protest is not only about students' desire for universal suffrage, but also dissatisfaction with rising inequality and a loss of economic opportunity.

Unfortunately, these demands risk being ignored if Beijing comes to believe — or if it has a pretext for claiming — that the protesters are pawns of the West. Since General Secretary Xi Jinping took power, Chinese rhetoric has become increasingly suspicious of foreign ideologies and "hostile foreign forces" subverting Communist Party control. (Not counting the foreign ideology of Marxism, of course.)

Last year, the Party circulated a list of seven banned topics of discussion, or "dangerous Western values, from "civil rights" to "freedom of speech."

The witch hunt for foreign meddling extends even to scholars in the Party's top think tank, the Chinese Academy of Social Sciences, who in June were accused by a corruption watchdog of having ties to "external forces."

All this creates a conspiratorial backdrop in which the weakest sign of American support can feed Beijing's subversion fears.

Protesters such as Bonnie Sin, 30, feel that US involvement will only "make a mess" of their demands.

"Even though I am Hong Kong people, I am also Chinese. I don't want America to say anything. We don't want to make it complicated. What do they know about us? The Beijing government is very sensitive. We are Hong Kong people defending Hong Kong in China, this is most important."

Chinese media is already trying to paint the protests as the product of Western machinations.

Meetings between US diplomats and student protest leaders have become propaganda fodder in official Chinese media, claiming that the US is interfering “in Hong Kong affairs, either through covert meddling, or blunt intervention.” Beijing’s Global Times reported “Western support serves as an anchor to the pan-democracy camp.”

"The real risk," says David Zweig, professor at the Hong Kong University of Science and Technology, "is that it takes away from the issues — the problems of young people's lives here in Hong Kong, their anxieties, their worries. Because then China can slough off responsibility and say the source [of the] problems is this fictitious, to a certain extent, bogeyman."

In the end, there may be little America can do to allay Chinese suspicion that this is not what it truly appears to be — a grassroots movement.

As Michael Davis, professor of law at the University of Hong Kong, points out, "Every time the US makes comments on anything China does, it's called interference."

"Beijing is so inclined to claim that everything is interference that the US can't form policy by trying to dodge it."