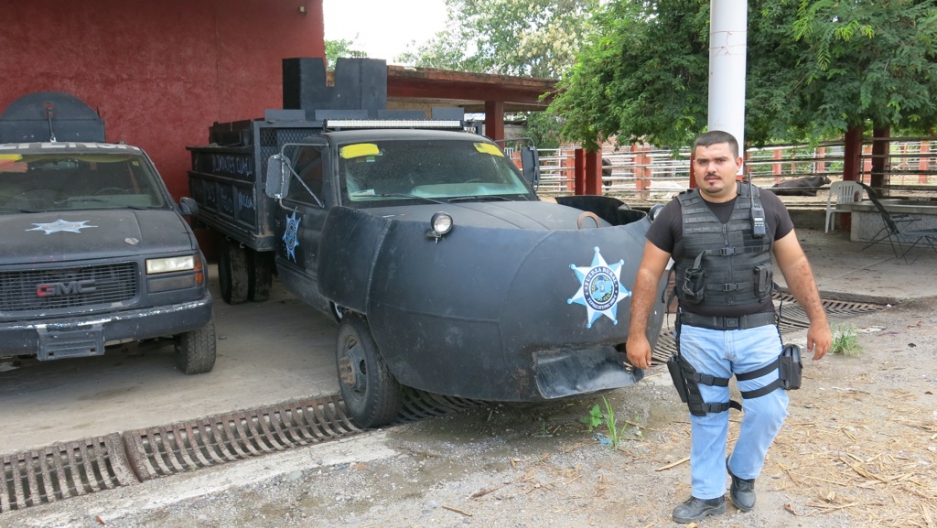 TEPALCATEPEC, Mexico — Back in 1981, the cult movie “Mad Max II: The Road Warrior” turned Australia into a post-apocalyptic wasteland where bandits fought in beefed-up trucks with huge battering rams and gun turrets. Fast-forward three decades to Mexico’s drug war, and vigilantes and gangsters have made such techno-barbaric road wars a reality.

The difference is that their real-life homemade tanks have much thicker armor and look even more nuts.

The first improvised fighting vehicles were made by the notoriously bloodthirsty Zetas cartel, headed by former soldiers who defected to the drug gangs. Combating marines, federal police, and other cartels, they created customized trucks known as “monstros,” or monsters, that could withstand machine-gun fire and grenades. Security forces hit hard against the Zetas and now have more than 40 of these monsters held at an army base in Reynosa, south of Texas. Others still lurk on dirt roads, with one used to attack a hotel in the border town of Ciudad Mier in April.

Farther southwest in Michoacan state, vigilantes fighting the Knights Templar cartel this year followed the lead to build their own trucks for battle. “We were going into heavy gunfire and we needed protection. So we made these monsters of our own, based on the vehicles that the Zetas had built,” says Francisco Espinosa, a 26-year-old cattle rancher who fought among the vigilantes.

In May, Mexico’s government deputized many members of these so-called self-defense groups, including Espinosa, into a new police squad called the Rural State Force. But they have kept their makeshift trucks in their old vigilante barracks at a cattle stable in the town of Tepelcatepec, in case they need to use them in the future.

GlobalPost took a look at these fighting vehicles and how the vigilantes built them.

“There were people in the town with metal workshops and they helped us put them together,” Espinosa explains. “As we learned what worked in the field we improved the designs.”

Here are some of the main features. It'll be interesting to see if a new Mad Max film planned for 2015 has anything similar.

Vigilantes (and narcos) in the field face not only high-powered rifles such as Kalashnikovs but grenades and even .50-caliber bullets from machine guns. The thicker the armor, the more likely they could make it home that night. This homemade armor on a customized vigilante pick-up truck stopped a bullet from killing the driver. Some Zeta monsters had metal sheets that were more than 4 inches thick. Too much solid metal can slow a truck down, but other materials can also help absorb bullets. Trenches of sandbags have long worked in the field, so why can’t they be mobile? Vigilantes discovered an effective method of monster-protection was to stuff a layer of sand between two thick metal sheets, as in this truck. The sand trenches are along the sides of the truck’s back section. The makeshift fighting trucks need to attack as well as defend. A swiveling sheet of metal mounted above the vehicle allows combatants to hold their rifle on a rest and fire while shielded. This vigilante truck has an example. The Zeta monster below has a fully defended turret. Gunmen don’t just have to be on top of the truck to shoot at the enemy. They can also be inside it. Lines of shooting holes in the backs of trailers allow several riflemen to fire. The holes may give less visibility and room to maneuver than the turrets do, but they also offer more protection. Some Zeta monsters had more than 10 shooting slots so their triggermen could unleash a barrage of bullets. Sometimes, you can put your gun away and use the whole vehicle like a missile. Battering rams are particularly effective for striking an unarmored vehicle. But some of them can even smash into buildings. They also offer a front line of defense.