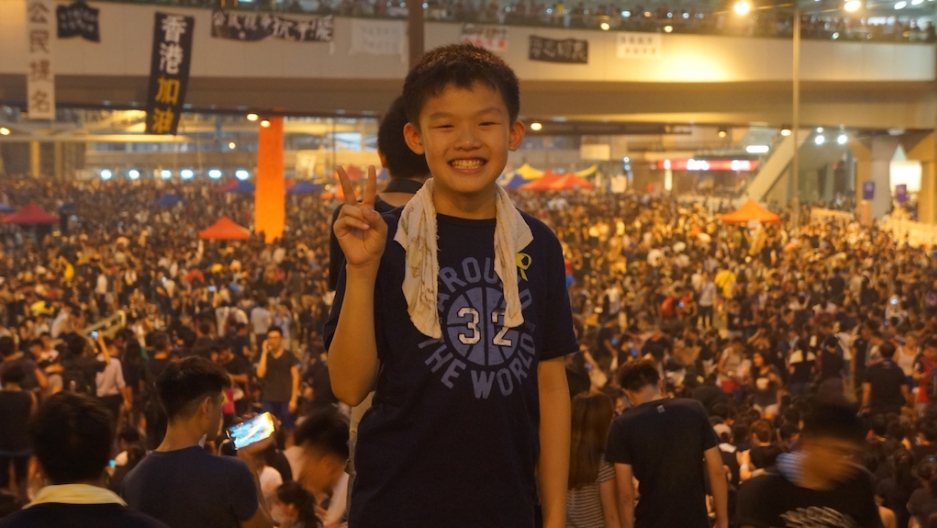 Day breaks at the #OccupyCentral sit-in in Admiralty, Hong Kong on Tuesday. Thousands of young people remained at the site near government headquarters overnight. Most of the pro-democracy protesters were dressed in solemn black. (Tom Grundy/GlobalPost)

Yellow ribbons for universal suffrage have begun appearing all over the city, including on the metro system. Hong Kongers are demanding "one-person, one-vote" after Beijing announced a restrictive reform plan for the city's 2017 chief executive elections. (Tom Grundy/GlobalPost)

Local media mogul Jimmy Lai, who is said to have donated HK$3 million (US$386,000) to the #OccupyCentral campaign, attended the protest. "You can feel the excitement... and have to participate," he said. (Tom Grundy/GlobalPost)

In Mongkok, a jovial and festive atmosphere reigned. A DJ appeared the previous night as residents reclaimed the streets. On Hong Kong Island, some foreigners held a barbeque as other shared food and sang protest songs. (Tom Grundy/GlobalPost)

Organizers have called upon the CY Leung (shown in the poster, right), to step down. "Lufsig" — a toy wolf from IKEA — has become a popular symbol of resistance after one was thrown at Leung earlier in the year. (Tom Grundy/GlobalPost)

At government headquarters, hundreds of yellow ribbons for universal suffrage have been tied to railings erected around Civic Square. The area was previously understood to be public space. (Tom Grundy/GlobalPost)

Student leader Alex Chow and Occupy Central co-organizer Chan Kin-man held a press conference at 5:00 p.m. calling for the protests to continue and for CY Leung to step down. Both have suggested protests may be escalated, but that it will be "up to the people" to decide how. (Tom Grundy/GlobalPost)

As the work day ended Tuesday, hundreds of thousands began pouring into Admiralty dressed in black. No police officers were in sight. On Sunday, the police were widely criticized for using tear gas and pepper spray on unarmed protesters. (Tom Grundy/GlobalPost)

Exchange students from Taiwan offer their support. Parallels have been drawn between the Sunflower Movement in Taiwan and Hong Kong's Umbrella Movement — both led by young people. (Tom Grundy/GlobalPost)

The movement has been dubbed the Umbrella Revolution after protesters were pictured using them to defend against tear gas on Sunday. (Tom Grundy/GlobalPost)

Thousands continued to pour in to the protest area around government headquarters as the day ended. With two public holidays ahead, and with the area expanding to the central business district, it is likely demonstrations will continue to gain momentum. (Tom Grundy/GlobalPost)