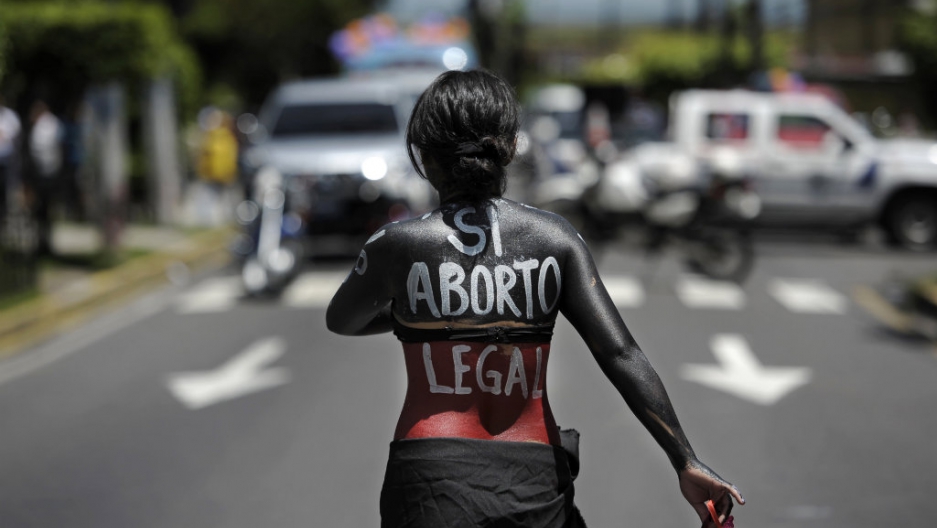 A woman participates in a march on the International Day of Action for the Decriminalization of Abortion, on September 28, 2012 in San Salvador. Salvadorean women marched to ask the government to legalize abortion as a right for women.
Credit: JOSE CABEZAS
Share

SAN SALVADOR, El Salvador — El Salvador’s troubled past was marked by 12 years of internal armed conflict from 1980 to 1992, during which many horrific human rights abuses were committed.

For more than a decade now, the country has enjoyed an era of peace, and major progress has included human rights treaties promising to protect the rights of its people.

During his inauguration in June, President Sanchez Ceren announced that he will govern "for all" with an "absolute commitment to social justice."

But my recent visit to El Salvador as secretary general of Amnesty International has revealed how far the country is from a commitment to justice for all.

Beneath the surface of apparent peace in El Salvador, a hidden war is being waged. It is a war that does not involve guns or troops but one that has resulted in the imprisonment and unnecessary deaths and disability of thousands.

It is a war against women and girls that is documented in Amnesty International’s new report, On the Brink of Death: Violence against Women and the Abortion Ban in El Salvador.

The report illustrates how a change in the law 16 years ago criminalized abortion in all circumstances, making it one of the strictest abortion laws in the world. Women and girls in El Salvador cannot have an abortion, even if continuing their pregnancy might kill them, or if the fetus is not viable and will not live.  Even a nine-year-old girl pregnant after from rape cannot get an abortion.

Those that defy the law and seek an unsafe, clandestine abortion are often punished severely. More than 11 per cent of maternal deaths are from unsafe abortions; deaths that are preventable. Those that survive face the possibility of prison sentences of two to eight years.

The Amnesty International report found that women who have had miscarriages are suspected of terminating their pregnancies and have been charged with aggravated homicide. Courts can order a prison sentence of up to 50 years in an aggravated homicide case.

The cases highlighted in our report are stark enough, but while in San Salvador, I have met with some of the world’s most forgotten women, women who were fighting for their rights in the face of adversity. It was a truly humbling experience.

Consider the story of Cristina. She was 18 years old when she miscarried. She passed out and was rushed to hospital where, instead of care and kindness, she was accused of actively terminating her pregnancy. In August 2005, she was sentenced to 30 years in prison.

Men also are fighting this injustice. Dennis Muñoz, a lawyer who heard Cristina’s story, was so shocked he tracked her down to the prison where she was being held.

Together they fought a two-year legal battle to get her sentence reduced. They won her release, but not before she had spent four years in prison. Muñoz describes the country’s abortion ban as a “witch hunt against poor women.”

Amnesty International believes that El Salvador’s total ban on abortion is a form of torture. It pushes women and girls to the brink of death. The ban violates women’s and girls’ right to life by forcing them to seek unsafe abortions, putting their health and lives at risk. It also denies them their right to health, privacy and to non-discrimination.

It is a shame to see El Salvador so far behind the rest of the world in its legislation on abortion. It is one of seven Latin American countries with a ban on abortion in all cases.

One country, Chile, is now making positive steps to rectify its laws. El Salvador and the others should follow suit.

Amnesty International is calling on President Sanchez Cerén to decriminalize abortion in all circumstances and ensure that women and girls have access to abortion, particularly in cases where the pregnancy poses a risk to the life or physical or mental health, where there is fatal fetal impairment, and in cases of rape or incest.

Only by changing the law, can women like Cristina be spared the heartbreak and cruelty of being punished for having a miscarriage. Only a change in the law will give other women and girls control of their bodies and decide how and when to carry a pregnancy to term.

And it is only by rectifying these heartless, outdated and discriminatory laws that president’s promise to provide social justice for “all” will include every woman and girl in El Salvador.