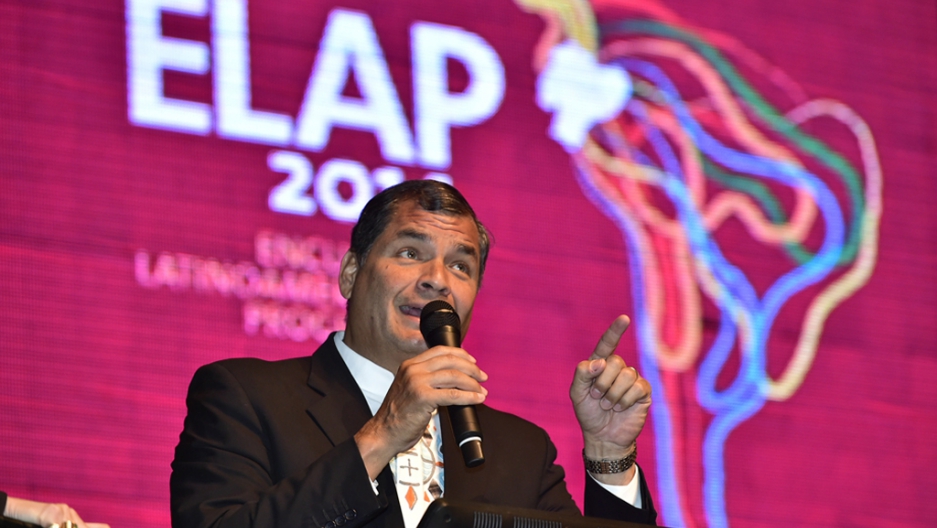 BOGOTA, Colombia — Under pressure from Ecuador’s left-wing government, the United States Agency for International Development is shutting down its operations in the South American nation after 53 years.

In a telephone interview with GlobalPost, Adam Namm, the US ambassador to Ecuador, called the decision “very disappointing.”

But it was no surprise. The government in Quito had refused to allow Washington's aid agency to renew its programs or start any new activity in the country.

President Rafael Correa is a fierce US critic who has already pulled the plug on US counter-narcotics operations at a Pacific coast base and expelled Namm’s predecessor as well as 14 US military advisers, whom he claimed were infiltrating Ecuador’s security forces.

Analysts say that the closure of the Agency for International Development, the US government foreign aid wing known as USAID, is part of a broader effort by Correa to stifle criticism of his administration and to halt what he views as outside meddling in Ecuador.

Correa, whose Alianza Pais party dominates all three branches of government, has been cracking down on the dwindling number of independent voices in Ecuador, such as the media and non-governmental organizations, and has been scrutinizing the work of foreign aid agencies.

More from GlobalPost: In Latin America, democracy's still no guarantee of press freedom

Last year, Correa signed Decree 16 that places onerous new regulations on NGOs as well as on foreign aid agencies. In December, he used the decree to shut down the Quito-based Pachamama Foundation, an environmental group that got under the president’s skin for criticizing his decision to allow oil drilling in the Yasuni National Park.

Correa claimed Pachamama members had attacked Chile’s ambassador to Ecuador, who was meeting with Quito government officials to discuss oil exploration, an accusation the organization rejected.

“Officials can now essentially decide what groups may say or do, seriously undermining their role as a check on the government,” Jose Miguel Vivanco, the Americas director for Human Rights Watch, said after Correa signed Decree 16.

Vivanco added: “Instead of adopting reasonable measures to facilitate the work of NGOs, the Correa administration is following the lead of countries such as Russia, Bahrain, Uganda, and Venezuela, which have imposed unjustified restrictions that violate fundamental rights and limit spaces that are critical to democratic society.”

Since Decree 16 went into effect, several other Ecuadorean NGOs have closed their doors.

“Let’s not fool ourselves” about the foundation’s underlying aims, Patiño told reporters.

The Correa government used similar arguments to force out USAID, whose Quito office employed seven US staffers and 25 Ecuadoreans.

About 10 percent of USAID’s $12 million annual budget for Ecuador was earmarked for “democracy and governance” programs. For example, the Quito-based free expression group Fundamedios received about $280,000 from USAID in 2011.

But Correa often rips that organization in his speeches because Fundamedios defends journalists and news outlets that have been targeted by his government for lawsuits and fines. Fundamedios has also been highly critical of a restrictive new communications law that went into effect last year.

“The attacks against NGOs have been fierce,” said Cesar Ricaurte, the director of Fundamedios. “The government tries to paint us as destabilizing the country.”

Although USAID remains popular in many countries, it has been coming under increasing fire from left-wing governments across Latin America, in part because the agency’s mandate includes advancing US foreign policy.

In 2010, Venezuela’s National Assembly outlawed foreign financing for NGOs with a political nature. The move came amid revelations that USAID had earmarked millions for “political transition and stabilization needs” in Venezuela, a program widely seen as supporting opponents of the late socialist President Hugo Chavez.

But the most problematic Latin American nation for USAID in recent years has been Cuba.

USAID subcontractor Alan Gross has been held in a Cuban prison for the past five years for delivering satellite phones and communications equipment to the island’s Jewish community. The Cuban government has accused him of spying.

In April, the Associated Press reported that USAID had tried to create a secret Twitter-like social media network, called ZunZuneo, in an effort to foment a kind of “Cuban Spring.” According to one USAID document cited by the AP, ZunZuneo was designed to help “renegotiate the balance of power between the state and society.”

In the interview with GlobalPost, Ambassador Namm strongly defended the aid agency’s operations in Ecuador. He pointed out that the vast majority of USAID’s budget went to programs promoting environmental conservation, economic growth, human rights and indigenous issues.