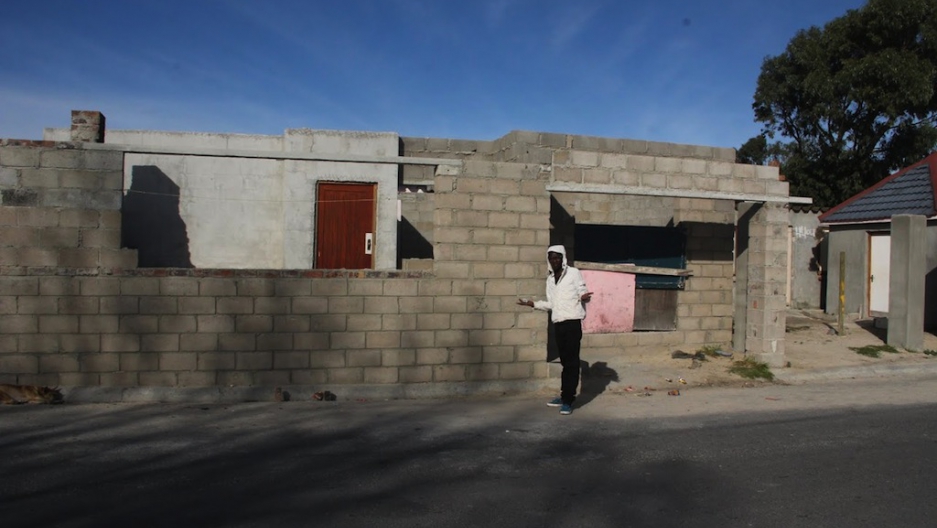 Editor’s note: This story is part of a Special Report on the global youth unemployment crisis, “Generation TBD.” It's the result of a GroundTruth reporting fellowship featuring 21 correspondents in 11 countries, a year-long effort that brings together media, technology, education and humanitarian partners for an authoritative exploration of the problem and possible solutions. This is Part One of a two-part series.

Athi, a 22-year-old black man who was just a toddler when apartheid ended, perches on the rim of a piece of playground equipment, a spinning metal circle that looks like an overturned wagon wheel. Here, socioeconomic inequality still resembles that of the apartheid years, when the lives of non-white residents were constrained by law and by force, skewing unemployment, crime, public health and education statistics against black and colored South Africans. Today the country’s youth unemployment rate is a crippling 52 percent for young people ages 15 through 24, and wages are very low for those who do work.

“I tend to smoke a lot. I get bored here because I’ve got nothing to do,” Athi says, walking back to his home on the west side of the tracks. A few young men cut across the road carrying “zincs,” or large strips of pilfered corrugated tin, to the scrapyard for cash. Athi shakes his head at them, and says it’s a classic scheme to make fast money to buy popular drugs like tik, a street version of methamphetamine, and mandrax, a sedative.

Last June, Athi was arrested for gun possession and served 14 days in prison. Now he carries a criminal record, creating an additional barrier to formal employment. Black men are imprisoned at a significantly higher rate than whites, and have the least access to quality education.

“I feel claustrophobic, each and every time I go to [look for jobs]. Most people know I [went] to prison. I see what some of them think of me...It’s the judgment,” Athi said. He said that in order to get a street sweeping job, “I don’t know what to do. Say yes or no [about serving time in prison]. If I say no, they’re going to find out. If I say yes, they’ll just throw my paper away.”

What is now Philippi West formed in the 1970s after the apartheid government seized black farms and homes in Ciskei and Transkei, leaving their owners without work or formal housing.

It became a place of refuge for those escaping political violence, as black men and women migrated west toward Cape Town in search of jobs serving whites. They built these stretches of makeshift housing at the edges of the city using any materials they could find: plywood, scrap metal, sheets of plastic, cardboard. Since Nelson Mandela's African National Congress took power in 1994, the government has invested spottily in townships, building brick homes and schools as well as limited infrastructure. These modest improvements haven't been nearly enough. The disparity in education between the races is rooted in the apartheid-era policy of teaching black children labor skills and disparaging racial stereotypes while white children were given a quality education. The Bantu Education Act aimed to limit the education of black children and train them for low-level labor jobs. Peliwe Lolwana, the Director of the Education Policy Unit at the University of the Witwatersrand, explained that the manual labor market, where black and colored South Africans tend to be employed, is shrinking.

“Our economy has been commodity-based,” she said. “We relied on what we can dig out of the ground, and that part of the economy is shrinking. [The economy] is unable to absorb a lot of people who have little education.”

As the economy transitions to jobs that require more education and technology skills, those with poor education are squeezed out. And some black youth shun menial jobs because their parents did them during apartheid.

To fight the odds, Athi attends job-training courses at Young in Prison (YiP), a nonprofit organization that works with at-risk and incarcerated youth on life skills development in Cape Town. Athi’s job training is part of a post-release program, designed for young people who have recently finished serving prison terms and working to re-enter society.

At YiP’s office, Athi is determined and patient. He sits quietly and types up his resume on an old Dell computer. He blends in with a line of about 10 young men who are typing one finger at a time, deleting, shaking their heads in frustration, capitalizing the beginning letters of sentences on the second try.

Lazola, a facilitator at YiP who is formerly incarcerated, said one of the frustrations is the lack of government support.

“In prison, they give us education and skills. The same government that gives this thing says, ‘No we don’t want to employ you.’ So why don't you test your rehabilitation on yourself?” Lazola asked.

The government has worked towards rectifying the structure of inequality from apartheid-era South Africa, but it’s happened at a slow pace over the last 20 years and crippled by internal corruption, according to University of Cape Town adolescent researcher Dr. Ariane De Lannoy.

De Lannoy commented that families who were previously disadvantaged during apartheid did not “disappear simply by the fact that this has now become a democracy.”

She co-wrote the book “After Freedom” about the post-apartheid generation, interviewing many young South Africans along the way.

“Whenever you asked young people in the country what do you think you’re life is going to be like, the aspirations are sky-high. They tell us they want to be pilots, doctors, lawyers. And of course for the majority of them that is a reality they’re never going to achieve,” De Lannoy said.

Athi said he wants to start his own business to create his own opportunity, a sentiment shared by many of his peers.

“I hate that the development here is so slow,” Athi said gesturing toward the wide, dusty streets of Philippi, lined by small concrete and tin-roofed houses on stretches of dirt roads. “We should focus on business and community. If you’re self-employed, then you can employ other people in in your community,” Athi said.

Athi’s friend Eric points to the Cape’s community of Muslim Indian South Africans who have achieved financial success despite marginalization.

“The Muslims work for themselves. You can go anywhere. You can see their own shops, own supermarkets,” Eric said.

A key population that makes up South Africa’s “rainbow nation,” Indian South Africans immigrated in various waves before and after apartheid, and in the past few decades have been able to climb the socioeconomic ladder much faster than black and colored communities.

According to a report by the South African Labour and Development Research Unit at the University of Cape Town’s School of Economics, in the past decade Indian unemployment had the largest decline, at 32.6 percent, as well the highest rate of self-employment.

Notably, Indians have the second highest household income after whites, and are the least likely to be arrested whether female or male in rural or urban areas.

Lolwana explained that race determines your opportunities in the job market. She said that people in the white and Indian communities often have managerial positions, which makes it easier for their young people to be networked into higher ranking jobs.

The majority of the colored and black population in comparison occupy labor jobs that hold little influence for hiring, and are part of a shrinking sector of the South African job market.

“So our inequality is still influenced a lot by our historical past,” Lolwana said.

“They see a number of people who finish school but don’t have jobs, and they think ‘what is the point?’”