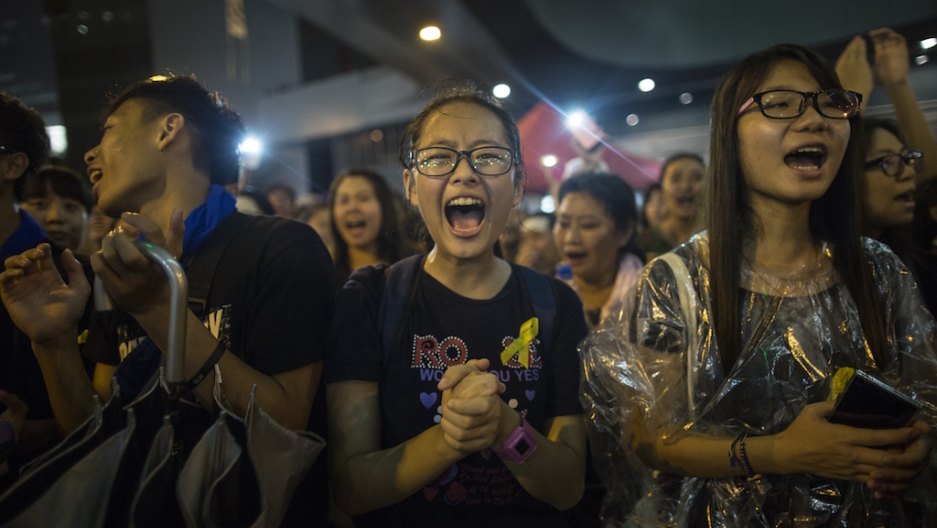 The face of a looming showdown.
Credit: Paula Bronstein
Share

HONG KONG — Greeting even torrential rain and lightning with cheers, tens of thousands of young protesters encamped outside Hong Kong's government offices entered Tuesday evening in high spirits, despite signs of an escalating confrontation with authorities.

On Tuesday morning, embattled Hong Kong Chief Executive CY Leung told protesters to clear out "immediately." He said the organizers of Occupy Central "had said repeatedly that if the movement is getting out of control, they would call for it to stop."

"I'm now asking them to fulfill the promise they made to society, and stop this campaign immediately."

Organizers issued an ultimatum demanding that the chief exec resign and meet democratic demands by Oct. 1, or face the spread of protests to other parts of Hong Kong or the seizure of a government building.

Tensions are particularly high around Oct. 1, as it is the 65th anniversary of the founding of the People's Republic of China. This is typically one of the biggest shopping days of the year, as hordes of tourists from mainland China flock to Hong Kong for vacation.

A jubilant atmosphere prevailed at the main protest site outside government headquarters and a PLA barracks in central Hong Kong. Volunteers spritzed passersby with spray-bottles and handed out towels to battle the crippling heat. Homemade tear-gas masks made of chem-lab goggles were selling for 10 Hong Kong dollars ($1.30). Teenagers wearing black distributed water bottles and crackers. After an especially loud crack of thunder prompted cheers, a man commented, "They think that God is supporting them."

Lights on in upper stories of PLA bldg (2nd from R). Wonder what they're thinking looking down. #OccupyCentral pic.twitter.com/qWko7Tv7QW

Beneath this cheer ran a current of fear. Some protesters said they feared that police would come to clear them out at midnight, to prevent them from disrupting the Chinese holiday.

"We feel they're planning something," said Kelvin Wong, 22.

And the Hong Kong protesters may find that the arrival of mainland Chinese tourists does not mean an increase in support.

Mainland shopper one block from protest: "protest? Nothing to do w me. Ppl in China want elections too but we know protesting is useless."