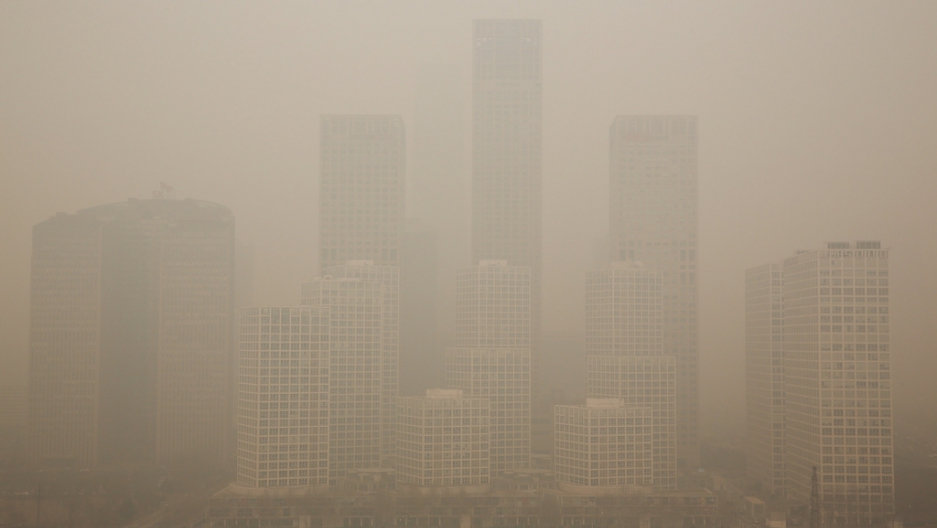 Imagine waking up to this view. Or worse: Imagine inhaling it.

This shocking photo taken earlier this year shows Beijing blanketed in thick, toxic pollution. It’s a disturbing sight, but not unusual in the Chinese capital.

Instead of pulling a blanket over their head and going back to sleep, many of the city’s 21 million residents put on a facemask and went to school or work that day, ignoring warnings from the World Health Organization to stay indoors. Like this guy.

It’s hard to overstate the severity of air pollution in China. In many cities the level of contamination in the air often reaches levels considered by experts to be hazardous, and much has been said about the devastating impact it's all having on people’s health and the country’s economy.

The increasing rate of lung cancer in China has been linked to worsening air quality (as have numerous other horrible diseases). The World Bank says that health problems from air pollution cost the Chinese economy somewhere between $100 billion and more than $300 billion a year, which is roughly equivalent to the size of the Malaysian economy.

Amid growing public anger, Premier Li Keqiang said in March that China would “declare war” on pollution — even though the country has been battling the problem for several years already.

The central government has already toughened environmental protection laws, ordered the closure of polluting factories as well as ramped up investment in renewable energy to reduce the country’s reliance on carbon-belching coal.

But there has been little progress, partly due to the sheer size of the country, but also because of corruption among local government officials and company bosses for whom tackling air pollution would mean harming their own political and economic interests.

In many cities, air pollution is worse than ever before. This is the eastern city of Lianyungang:

It’s a depressing situation, but a new study offers hope that it's possible to reverse the trend.

Welcome to Taiyuan, the capital of Shanxi, a province in northern China rich in coal resources. It's hard to tell from this photo, but Taiyuan has long been considered one of China’s most polluted cities owing to the huge production and use of coal in the region.

That may not be the case anymore. Researchers found efforts by the Shanxi government to improve air quality in the city between 2001 and 2010 had resulted in a sharp drop in contamination. Healthcare costs also plummeted and the health of local residents improved significantly. Amazing.

But how did the local authorities do it? It appears they just did what Beijing asked them to do, according to the study published in Environment International.

Among other things, the government toughened emission standards, reduced energy consumption, cracked down on producers of toxic and hazardous materials and shuttered polluting factories.

As a result of their efforts, the economic cost associated with air pollution, including premature death, fell more than 50 percent over the 10-year period, while the average concentration of harmful air particulates — which have been linked to lung cancer, cardiovascular and respiratory diseases — more than halved.

“Our analysis demonstrates that air pollution abatement during the last decade in Taiyuan has generated substantial health benefits,” wrote the researchers from Columbia University in New York, Fudan University in Shanghai and Shanxi Medical University.

That’s not to say that the air in Taiyuan is 100 percent pollution-free. It’s not. But it’s a lot better than it was and it gives hope that one day more of China’s 1.3 billion people could breath cleaner, if not totally clean, air.