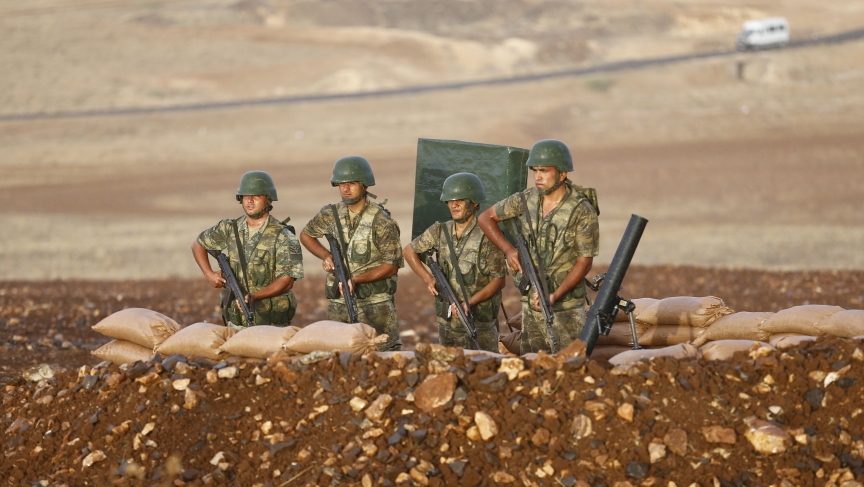 Turkish soldiers stand at a position on the Turkish-Syrian border near the southeastern town of Suruc on September 24, 2014.
Credit:

With violence escalating in neighboring Syria, Turkey is taking tentative steps to join the military coalition against ISIS.

On Monday, shells from a battle between ISIS and Kurdish forces landed on Turkish soil, prompting Turkey to deploy tanks and armored vehicles to the border. Now, on Thursday, the country's parliament will decide whether to approve direct military action against ISIS, which is also known as the Islamic State.

“It does seem to be that [Turkish President Recep Tayyip Erdoğan] and Prime Minister Davutoğlu are definitely positioning Turkey ... to be that figure, to be central,” says Dalia Mortada, a journalist based in Istanbul. “It seems that Turkey could be significant in this fight against ISIS.”

Erdoğan has been increasingly outspoken about his intent to fight ISIS, saying Turkey needs help to “dry out the swamp” in Syria and and urging action beyond airstrikes. But this is a recent change of opinion. Only a week ago, Turkey refused to join an anti-ISIS coalition led by the United States, even after dozens of its citizens were released by ISIS militants on Sept. 20 after being abducted from the Turkish consulate in Mosul.

But now Erdoğan says Turkey “cannot stay out" of the fight against ISIS. "Erdoğan is forming his foreign policy based on what is happening, as opposed to actually having a solid policy that he sticks to," Mortada says. "So it’s very reactionary.”

That confusion is reflected in Turkish public opinion, which remains divided over the conflict in Syria. According to a recent survey from Turkish pollster Metropoll, just over half of the population supports Turkish involvement in the anti-ISIS effort.

“It’s probably because ISIS is so close,” Mortada. “There is recruitment happening from poor neighborhoods in cities in Turkey, and people are actually seeing the results of this now.” But the numbers supporting Turkish involvement are still far lower than the two-thirds who support "international" action.

According to that same poll, only 1.3 percent of Turks sympathize with ISIS. However, this minority made itself known on Friday at Istanbul University, where an anti-ISIS stand was dismantled and activists were attacked by masked counter-protestors who were allegedly ISIS sympathizers.

Erdoğan hasn’t shown any concern over the 1.3 percent, says Mortada. But, she adds, “having these skirmishes at a public university in central Istanbul is definitely something to watch.”