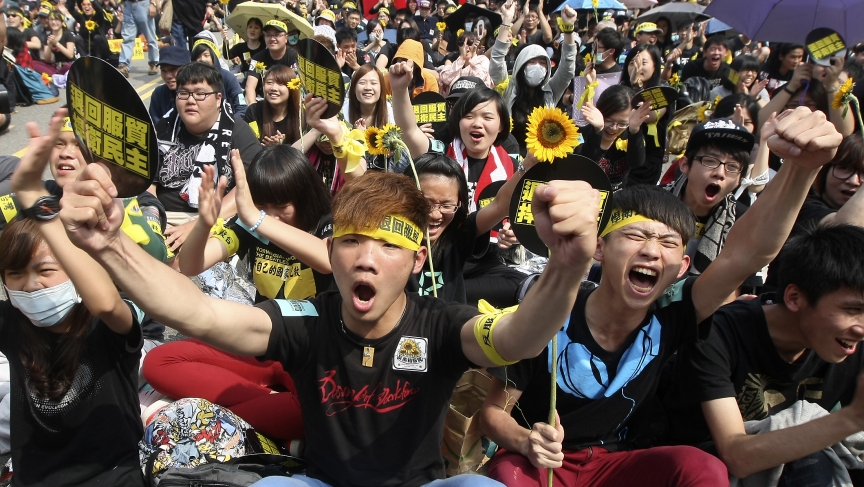 Demonstrators shout slogans in front of the Presidential Office in Taipei on March 30, 2014. Thousands of demonstrators marched the streets to protest against the controversial trade pact with mainland China.
Credit:

If Beijing had its way, the democratic island of Taiwan would be reunified with China under the same political set-up that governs Hong Kong. It's known as “one country, two systems," and it gives Hong Kong a certain amount of autonomy from the central government — or, at least, it's supposed to.

But as thousands of pro-democracy protesters in Hong Kong are met with tear gas and pepper spray, some Taiwanese think it's evidence that the “one country, two systems” idea has failed. The "autonomy" enjoyed by Hong Kong, they believe, is a sham.

Beijing will allow Hong Kong, a former British colony, a direct vote for its next top leader. But Beijing recently ruled that candidates will have to be approved by a largely pro-Beijing nominating committee before being put on the ballot. Protesters argue that this election framework, presented by the Standing Committee of the National Congress of People Committee, goes against the universal suffrage that Hong Kong was promised.

In response to the clashes between the student protesters and the Hong Kong police that started last Friday, more than a thousand people gathered in Taipei's Freedom Square to express their solidarity with Hong Kong protesters.

A Taiwanese blogger, shophist4ever, said the election framework imposed on Hong Kong by Beijing reflected the failure of “one country, two systems”:

The Chinese government does not need to make things so ugly. The ‘one country, two systems’ in Hong Kong is also a demo for Taiwan. However, the so-called ‘electoral reform framework’ proposed by China's government is actually designed for a [Hong Kong] chief executive selected by Beijing. For a person who has seen a real election in a democratic country, they will not accept this proposal.

Black Island Youth, an activist group, explained why they support the protests in Hong Kong on their Facebook page:

The Black Island Youth has protested against the [pro-unification ruling party] Kuomintang, which keeps ignoring Taiwanese citizens’ voices, and has resisted the ‘China factor’, which has more and more influence over the Kuomintang. As a result, we highly respect the courage and effort of the young people in Hong Kong shown in your protest against the Chinese Communist Party (CCP).

The group was active in the Sunflower Movement, a wave of protests in the spring against a trade agreement that demonstrators believed would draw Taiwan closer to Beijing. The Chinese government considers Taiwan a breakaway province rather than an independent country.

Kuo-Chang Huang, one of the leaders of the Sunflower Movement, argued that the Chinese Communist Party's presence in Hong Kong has eroded the rule of law in the city and warned Taiwan not to follow in Hong Kong's footsteps:

From the point of view of China, Taiwan is in the same position as Hong Kong. The CCP plans to make Taiwan economically rely on the market in China so that it can put Taiwan in its pocket slowly. Afterwards, the CCP will have a lot of chips in the political negotiation. The CCP will let Taiwanese see the reality. ‘You cannot escape from my hand, so what do you want to negotiate with me?’ The end game of the cross-strait relationship is to unify Taiwan and put Taiwan in the CCP’s pocket.

And that's why the protests in Hong Kong have inspired Taiwanese activists. A retired professor, Chin-Hsing Liu, talked about what he observed in his trip to Hong Kong this June when an unofficial referendum on voting rights, which earned hundreds of thousands of signatures, was taking place:

This trip to Hong Kong was a big shock to me. Previously I thought since the sovereignty of Hong Kong has been transferred to China, Hong Kong is geologically connected to China, and Hong Kongers used to consider themselves as Chinese, how can they escape from the hand of China? […] I was wrong. You cannot force a chicken back into an egg. A person who used to have freedom will not give up freedom. Although the democracy movement in Hong Kong started late, they have a firm direction and full power.

This story by I-fan Lin was originally published by our partner Global Voices Online, a community of bloggers from around the world.