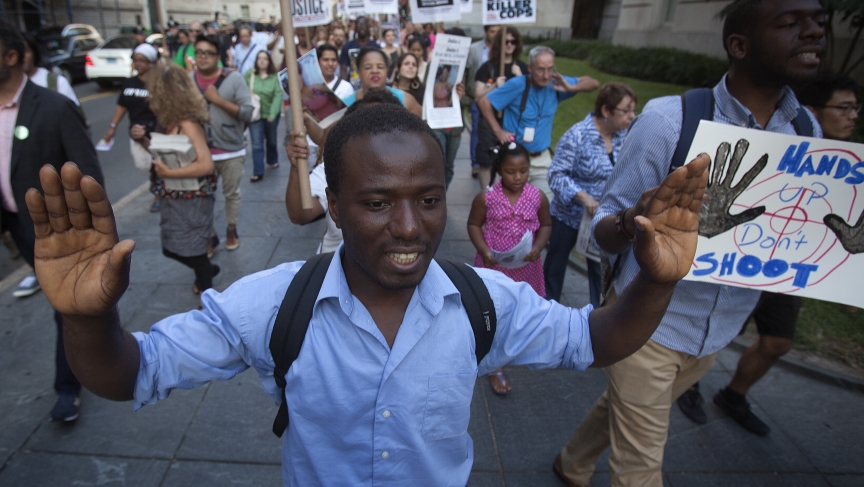 Protesters chant "Hands up. Don't Shoot" during a protest in the Manhattan borough of New York August 18, 2014. A few dozen protesters gathered at New York City Police headquarters to show their support for Michael Brown, who was killed by police in Ferguson on August 9, 2014.
Credit:

If you have seen pictures from this weekend's pro-democracy protests in Hong Kong, you may have a sense of deja vu. The Hong Kong protesters are using a gesture similar to the Ferguson protesters' "Hands up, don't shoot" signal.

According to Vox, most of the Hong Kong protesters it interviewed said the gesture had no deliberate connection with the protest movement in Ferguson. They said they were just trying to convey a sense of peacefulness to law enforcement. As in Ferguson, the sign was a bid to remain safe, despite what many observers have described as an unprecedented level of force from Hong Kong police.

So far few serious injuries have been reported in Hong Kong, but comments, and the gesture itself, indicate protesters are worried.

A high-tech 'sunflower' aims to grow the solar energy industry

Researchers from IBM, in cooperation with the Swiss company Airlight Energy, think they've developed a better way to convert solar energy into useful power. They claim their solar converter could cost one third of today's similar solar converters and be far more efficient.

The so-called "sunflower converter" is inspired by the flower and the human circulatory system. The collector, like a sunflower, tracks the sun. Like a satellite dish, it focuses solar radiation across a surface of wafer-thin aluminium mirrors. The mirrors convert the sun's energy into electricity, while a cooling system reduces the heat in the mirrors — critical for the device's operation — and also captures the heat for use, say, to desalinate water.

The Guardian reports that the devices are expected to produce 12 kilowatts of electricity and 20kW of heat on a good day — enough for several homes. They should hit the market in 2017.

Water on Earth is actually older than the Sun

Scientists have determined that all the water on Earth — the water we bathe with, the water we drink and cook with — was created before our solar system formed. If it hadn't been, then it would have been vaporized in the intense heat that existed as the Sun formed and ignited.

That means the water would not have been on Earth in those early days of the solar system, but would have arrived here, perhaps via comets, at a later time.

PRI's Science Friday talked to one of the researchers who helped confirm this stunning conclusion using knowledge of astrophysics and chemistry. The Earth's water, it seems, may be a million years older than the Sun.

North Korea's state-run media recently revealed that the country's young leader, Kim Jong-un, was "not feeling well." While that would be a minor blip on the radar in most countries, in secretive North Korea, it was a bombshell. And even more surprising is that North Koreans are not the only ones treating him.

Officials in South Korea say a group of foreign doctors came to the country recently to treat the ailing leader. According to the Voice of America (VOA), Kim was last seen in public on Sept. 3. Over the prior two months, he was limping at various events, leading some to speculate he may be suffering from high blood-fat levels, or diabetes, due to heavy drinking or binge-eating.

VOA says the North Korean leader has already missed high-profile events, but the Oct. 10 Korean Workers' Party anniversary celebration will be a major test to see how serious his illness is. If he doesn't appear there, it would be highly irregular.

Vioence in the world is not as bad as it seems

Terrorism in Syria and Iraq, chaos in Libya, fighting in Afghanistan, separatist rebellion in Ukraine — the news seems to be dominated by stories of death and violence. But according to a scientific study, the world is actually less violent than it has been during the recent past.

PRI's The World talked to researcher Steven Pinker, who studied the current rate of violent death and compared it to various times over the past 70-plus years. Pinker found that during World War II, for example, 300 of every 100,000 people on Earth were killed each year. That number slowly fell into the single digits during the 1980s and 90s, and then fell below one after the year 2000.

The current crises have driven the rate back up to right around one — higher, certainly, but still a far ways from even recent historical rates of violent deaths.

Saipan and Tinian in the Marianas Islands are getting prepared as Tropical Storm Phanfone moves toward them. According to a community alert at the Marianas Variety local news site, the storm has winds of 40 mph and is expected to hit the island chain Tuesday night. Looking ahead, Japan and other parts of East Asia are bracing for the storm, which follows closely on the heels of another storm that flooded rural areas and caused landslides. Phanfone should move toward Japan by week's end.