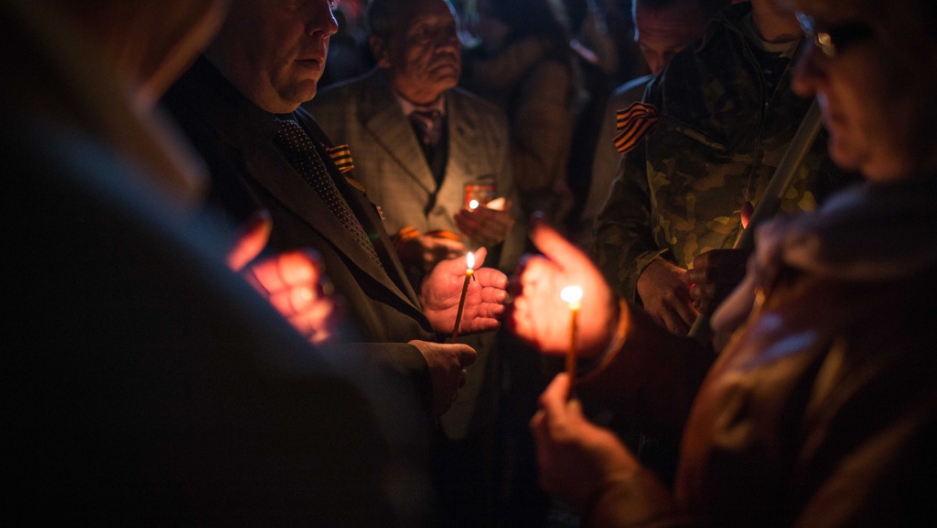 MOSCOW, Russia — A mournful crowd gathered under a light drizzle here on Saturday evening, carnations and candles in hand, to pay their respects to the civilian casualties of Ukraine’s war against pro-Russian separatists.

But according to them, those responsible for the more than 3,000 dead aren't just ordinary Ukrainian soldiers and politicians — they’re fascists, just like the Nazis.

As a nominal ceasefire between Ukrainian forces and rebels hangs by a thread, Russia’s official information campaign casting the Ukrainian authorities as murderous war criminals appears more successful than ever.

That message — broadcast on state television and repeated endlessly by top officials — has been so heavy-handed that some Russians are drawing direct comparisons with the USSR’s fight against Nazi Germany, probably the most pivotal event in Soviet history.

That was the case this weekend, when several thousand Russians attended the memorial ceremony to commemorate the dead.

The location was an unmistakable statement: a sprawling park that commemorates the Soviet Union’s victory in World War II, in front of a monument honoring the victims of Nazi genocide.

“Today we’re all outraged, and I think in Europe and everywhere else we’ll rise up against fascism,” said Almira Begeyeva, 63, a retired history teacher who attended the ceremony.

It was widely seen as a response to last weekend’s peace march, which brought some 26,000 demonstrators to the streets of central Moscow to protest what they said has been the Kremlin’s confrontational policy toward Ukraine.

Named “Innocent Victims” and attended by an array of public figures — including high-ranking parliamentarians and at least one senior member from the ruling United Russia party — the event was widely covered by state media.

Organizers focused particularly on last week’s discovery by rebels of a mass grave not far from their self-styled capital of Donetsk and called for international condemnation. It was the latest in a round of accusations of war crimes traded between the Ukrainians and separatists.

To be sure, both sides of the conflict appear to have committed serious crimes.

But a similar mass grave was discovered in the former separatist stronghold of Slovyansk, shortly after they abandoned the city in July. There’s also been no shortage of reports documenting the rebels’ lawless, fear-inducing brand of gun rule.

Yet speakers at the event made it perfectly clear who they felt was to blame for a war that’s also displaced hundreds of thousands.

Vladimir Kostyuchenko, the deputy head of a veterans’ union, even compared Ukraine’s anti-separatist campaign in Donbass to an infamous Nazi massacre of Jews, Soviet prisoners of war, and others during the German occupation of Kyiv..

At best, it’s a wildly inaccurate comparison since more than 30,000 people were summarily executed during a targeted operation in 1941 at Babi Yar in Kyiv, which today represents a tragic milestone in Jewish collective memory.

Up to 150,000 other Soviet citizens were executed throughout the Nazi occupation at the same spot.

“We should not leave things as they are,” Kostyuchenko urged the crowd, calling for “war criminals” to be punished.

But its legacy has taken a front seat amid the wave of state-sponsored patriotism that’s washed over Russia since Vladimir Putin’s return to the presidency in 2012.

Feelings of national pride grew even stronger in the wake of the Kremlin’s annexation of Crimea last March, which led to an unprecedented boost in support for Putin himself.

An overwhelming majority of Russians back the Kremlin's tacit support of the separatists, which is probably why more than a third of the population now views Putin as a leading moral authority, according to a recent poll.

As Russia and the West have locked horns in the greatest geopolitical standoff since the Cold War, the Kremlin has sought to resurrect a narrative that casts Russia as a defiant bulwark against aggressive foreign powers.

On Saturday, some even drew parallels between the West’s support for Ukraine today and the perceived hesitation by Allied powers during the war to open a second European front against Hitler’s forces.

Dmitry Voskresensky, a 38-year-old attendee, suggested the West implicitly enabled German forces for fear of ending up on the losing side.

“And only then, the Russian and Soviet people went forward, just as they’re doing today, confident in their victory against fascism,” he said.

Organizers insisted the event was not a political meeting, but the flags of the two self-proclaimed rebel republics in eastern Ukraine — as well as those of Russian political parties — were in abundance.

Nevertheless, historical memory appeared to be at the forefront.

Begeyeva, the former history teacher, pointed with pride to the fact that a Soviet Red Army division from her home region of Bashkortostan helped beat back Nazi forces from eastern Ukraine during World War II.

“If only they were alive today and saw what was going on,” she said. “I joke around that they’d immediately call for mobilization and we’d all go [to eastern Ukraine] with our flags and everything.”