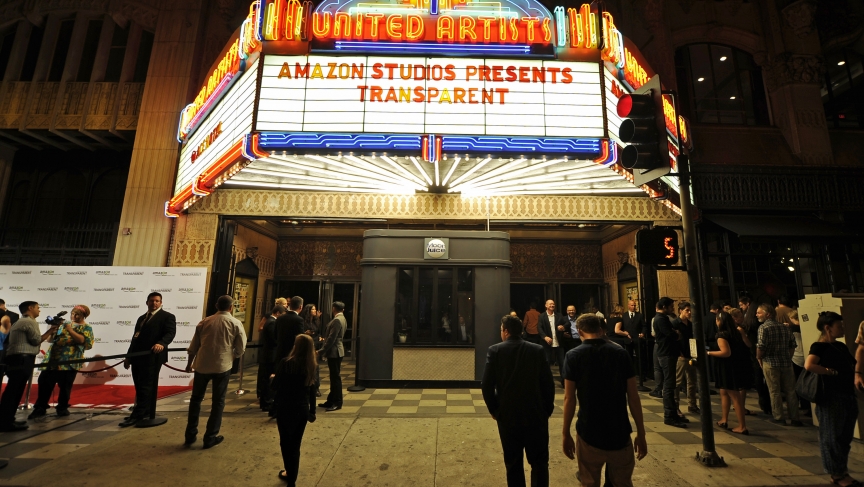 The marquee of United Artists Theater during Amazon's premiere screening of the TV series "Transparent" in Los Angeles, California on September 15, 2014.
Credit:

On Friday, Amazon launched a new, highly anticipated show called "Transparent," starring Jeffrey Tambor as a transgender parent struggling to come out to her family.

The show's debut comes just days after AT&T announced a new package with Amazon: For $39 a month, new subscribers get broadband internet, HBO and HBO Go, Amazon Prime and a variety of new, Amazon-exclusive programs like "Transparent."

“It feels like this could be Amazon’s ‘House of Cards’ moment,” says Brian Stelter CNN's senior media correspondent and the host of “Reliable Sources." “What I mean by that is, about 18 months ago Netflix was put on the map with original programming thanks to ‘House of Cards.’”

While Netflix has rolled out other streaming-specific content like “Orange Is The New Black” and “Lilyhammer,” Stelter says that “House of Cards” catapulted Netflix’s popularity among audiences of all ages.

“This could be that moment for Amazon too,” he says. “Rarely have I ever seen so many universally positive reviews for a series. Critics are not just saying that [Transparent] is the best show on Amazon, I’ve heard a lot of critics say that it’s the best show on all of TV this fall, it just happens to not to be on traditional TV.”

With “Transparent" earning rave reviews, Stelter says new customers may be drawn to Amazon in a way that they never have before. “When you have critics saying that it’s the best new show of the fall, that’s going to motivate a lot of people to go online for the first time and look at Amazon Prime," he says.

But will the show and the new package it accompanies be a business success? What will it take to make an internet audience used to pirating TV shows actually pay for content?

Stelter admits that Amazon’s model is even more unusual than Netflix. “To go from DVDs to streaming is one thing,” he says, “but to go from an online store for books to a television studio and distribution system is an even stranger thing. The same place I get my toilet paper I can also get ‘Transparent.’”

That new approach reflects the huge changes in media consumption that have rocked the entertainment world.

“There’s a lot of experimentation going on right now with trying to get new people to subscribe to some form of cable by offering a slightly less expensive package with a smaller number of channels,” Stelter says. “By including something like Amazon or Netflix in that bundle, these distributors are acknowledging the new world — and it is a much more on-demand style world where people people want programming as they can have it.”

But, as mentioned earlier, Amazon's new deal doesn’t just include television content: Several other services are also bundled in, including internet access, discounted shipping through Amazon Prime and other things.

Stelter says Amazon’s new move is designed to put it in direct competition with other media and tech giants like Google, Facebook, Microsoft and Apple.

“When you’re playing in that big of a league, you want to have as many different services and be competing in as many possible ways as you can,” he says. “To have this kind of forward-facing television approach is, in some ways, sort of old fashioned. But I understand why they’re doing it — they’re going to get a lot of attention.”