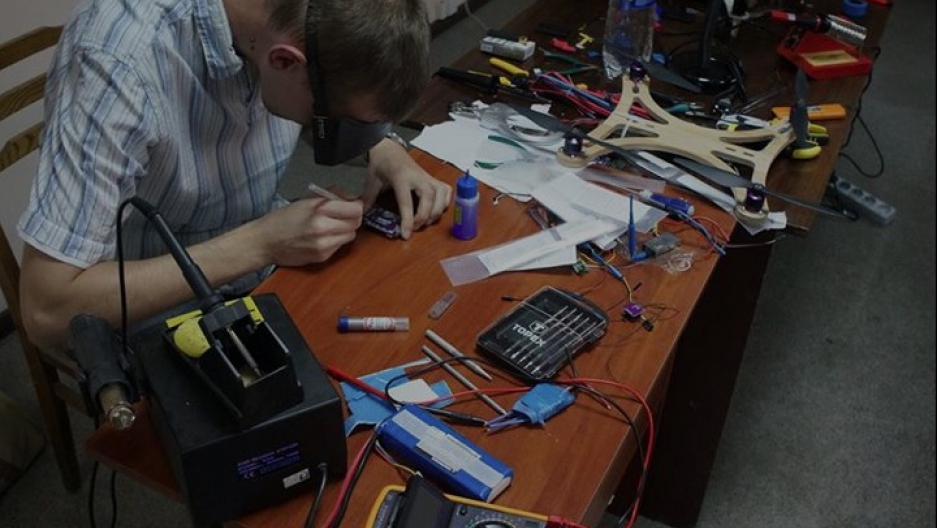 Hard at work building reconnaissance drones at Army SOS: "There's no plan for 'What if?'"
Credit: Army SOS
Share

KYIV, Ukraine — Inside a warehouse on the grounds of an old Soviet-era printing press, several men in fatigues load heavy equipment into a military van. They’re intelligence officers picking up radio instruments for intercepting communications in eastern Ukraine, where the military is locked in a fragile cease-fire with Russian-backed separatists.

The gear is being provided by civilian volunteers who collect donations for supplying soldiers on the front lines.

The group, called Army SOS, was launched in March to provide toilet paper, socks and other bare necessities to forces who “had pretty much nothing,” says Oleksii Savchenko, one of the young founders who helped start the effort out of his car.

Since most goods handed to the military in the capital were being stolen, Savchenko says, he and some of his fellow investment bankers decided to get supplies directly to the soldiers by driving them into the conflict zone themselves. They were joined by students and others who now make up one of the largest such volunteer groups in Kyiv.

In addition to obtaining surplus Western military clothes, food and sleeping bags, they’re camouflaging armored trucks bought second-hand in Europe. And up a set of stairs behind a door secured only by a single lock, they’re designing their own sophisticated reconnaissance drones from large model airplanes and helicopters.

They’re also developing computer programs for soldiers to use on tablets loaded with satellite images and calculators that convert map coordinates for plugging into artillery and other long-range weapons.

“You can’t imagine how happy they are to have them,” Savchenko says. “The maps the military uses are thirty years old.”

The effort is evidence of just how ineffective the military is in a country whose government is paralyzed by corruption — and testament to how much ordinary Ukrainians are doing to keep their society functioning.

“People here don’t really understand there’s a war going on,” Savchenko adds. “They don’t understand that if we don’t unite, Putin himself will be here in Kyiv.”

The volunteers also reflect a newer development: the emergence of a national identity Ukrainians say was born during protests against the old administration last year and is now being shaped by the crucible of war.

It may prove crucial if Ukraine is to emerge from its current crisis in one piece.

Many people in Kyiv currently support the government and say they’re prepared to endure hardships. But as the conflict continues to take its toll and winter sets in, some fear the pressure on ordinary people will stoke disillusionment that may prompt another protest movement that would tear the country apart.

In the city center, life seems more-or-less normal. Aside from people holding out boxes for donations on the streets and a photo installation of war images on the Maidan — the central square where protests toppled pro-Moscow President Viktor Yanukovych in February — visitors would be forgiven for not noticing the country is engaged in a military conflict. People stroll in the warm sunshine, laugh at cafes and otherwise enjoy the early fall weather.

That may be deceptive.

“If you dig a little deeper,” says a yoga instructor named Olga Kuzakova, “there’s a lot of pain.”

Many Kyiv residents have had no hot water since June because coal from Donbas, the country’s eastern mining heartland, no longer reaches heating plants here. Municipal heating will be turned on only after temperatures drop lower than usual to save natural gas stores.

But the pressure of not knowing what the future will bring is exerting a great psychological toll on some.

After pains in her stomach forced her to the hospital, Kuzakova says, a doctor advised her to stop watching television news in order to reduce stress.

In cities such as Mariupol in the east and Odessa in the west, residents worry about Russian-backed attacks coming at any moment.

But such threats, many people here say, are helping Ukraine form its own identity for the first time since the end of communism. “If suffering and sacrifice forms a nation,” Kuzakova says, “it’s happening now.”

Although Russian is still spoken everywhere, more people insist on speaking Ukrainian, especially the young. Shirts decorated with traditional Ukrainian embroidery are selling out. Crews of men are painting roadside railings yellow and blue, the colors of the national flag.

Political analyst Volodymyr Fesenko says the new identity is forming after two decades during which Ukrainians felt pulled between loyalties to their new post-communist country, Russia, the West and nostalgia for the Soviet past.

“The national hymn is no longer abstract, but a very real signifier of unity with one’s own people,” he says. “The same for the flag’s colors and other national symbols.”

That process is forcing choices on the many people here with deep ties to Russia, including relatives and friends living there.

Among them, Alexander Loginov, a third-generation ethnic Russian in Kyiv, says he’s not sure who’s to blame for the conflict. “I don’t know how it started,” he says, “but it makes you want to cry.”

Despite or perhaps because of the gritty nature of life in the typically bleak industrial regions of the east, many there tended to look down on western Ukrainians, often seen as unfairly benefitting from their hard work.

Appealing to them represents one of the government’s most delicate challenges. “They must feel Ukraine is their country, too, and that they have a future within it,” Fesenko says, adding that anti-corruption and modernization reform will be crucial for that.

But few feel as pressured as the volunteers driving supplies to the conflict zone in eastern Ukraine.

“It’s frightening the first time,” says Savchenko, the Army SOS leader. “But then you want to go help the people you make friends with there.”

Two of the group’s volunteers have been taken hostage by separatists.

More from GlobalPost: Why is Ukraine having such a hard time getting its message across?

Savchenko says he’s given up on support from Western countries.

“They’re too attached to Russia because of their business ties and lobbying,” he says.

“At the beginning of the revolution, I wanted to join Europe,” he adds. “Now I don’t want them. We’ll build a better state than any European country.”

Yaroslav Tropinov, another Army SOS leader, is optimistic about that. He says after the failure of the 2004 Orange Revolution, ordinary people have understood they need to exert control over the authorities through parliament and other means to ensure the country reforms.

Asked whether it’s futile in the meantime to try to fight against rebels backed by a Kremlin that can turn the tide of the conflict any time it chooses, Tropinov says his group is simply struggling for Ukraine’s survival.