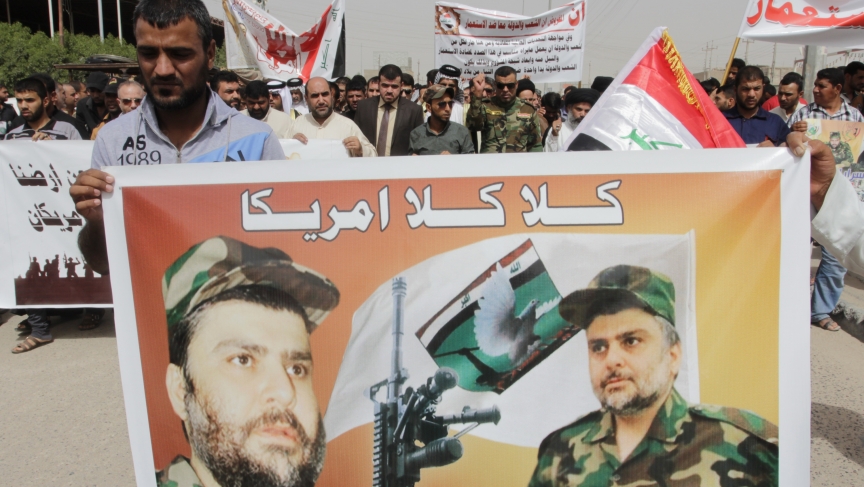 A demonstrator holds a banner with a picture of Shiite cleric Moqtada al-Sadr during a protest against the entry of American troops into Iraq on September 26, 2014. The words on the banner read "No No America."
Credit:

Moqtada al-Sadr is back. The radical Shiite cleric, who organized a militia to fight Americans during the war in Iraq, is now rallying his troops against ISIS. And — surprise — he says he doesn't need American help with that.

The US now heads a coalition that's bombing ISIS, also known as the Islamic State, but Sadr has denounced the American-led intervention. He addressed the United States directly in a press statement, saying, “we gave you a taste of the heat of our fire and our might in the past. We will give a taste of the scourge of this decision, which will be the cause of your regrets and regression."

BBC correspondent Lyse Doucet, who's on assignment in Baghdad, says Sadr's new "Peace Brigade" is all over the streets of the Iraqi capital. “They were talking to the soldiers and to the police on the street, although they operate quite independently," she says. "They were very clear with us [saying] ‘We don’t need the West to come back, we don’t need America and we don’t need Britain.'”

And Sadr is not the only religious leader organizing militias to fight ISIS. “I’ve met another prominent cleric, Sheikh Alloush, who heads the Abbas Brigade, which fights not just in Iraq but also in Syria," Doucet says. "Both of these clerics launched recruitment drives. And in Sheikh Alloush’s case ... he’s recruiting Shias, which is a good development in a place where the sectarian split is one of the most dangerous fault lines.”

The clerics are united in their distrust of the US and other Western countries intervening in Iraq.

“They feel that when these countries come back to Iraq, they come with their own agenda,” Doucet says. “But I have to say, it’s not just these more radical Shiite groups who are saying that. I’ve spoken to members of [Iraqi] Parliament; I’ve spoken to senior government officials who talk about the double standard of the west. One of the deputy governors said to me ‘Why did America wait so long to come? It was only when they saw the minorities, the Yazidis and the Kurds were in dire straits.'"