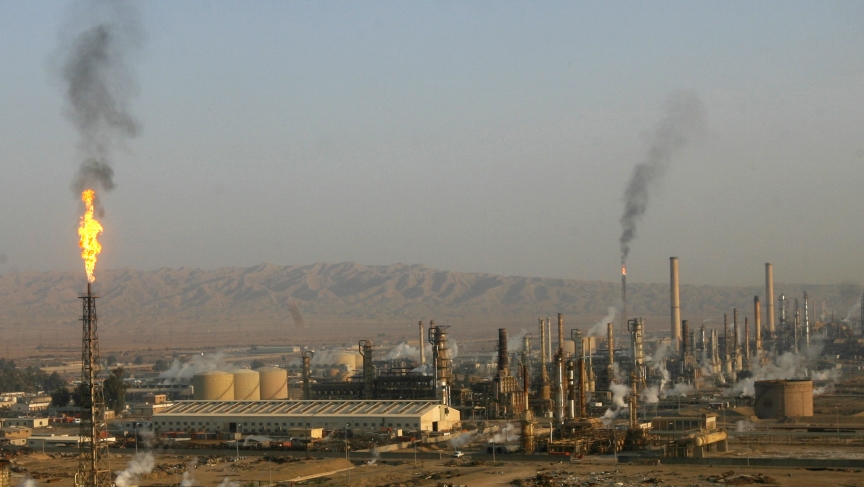 A general view of the Baiji oil refinery, Iraq's largest, in 2009. Today it's being held — barely — by Iraqi forces against ISIS fighters.
Credit:

Iraq's largest oil refinery is surrounded on all sides by fighters from ISIS, but the refinery itself is still in government hands — for now.

The Baiji refinery, located 112 miles north of Baghdad, ceased operations in mid-June. That's when ISIS fighters first took control of the areas around the plant and effectively sealed it off from deliveries of crude.

Ben Lando, the founder of Iraq Oil Report, says that between 100 and 300 soldiers from the Iraqi special forces are holed up inside. "Eye witnesses tell us that helicopters have been dropping off supplies and additional troops over the past week," he says.

The three-month-long standoff has been marked by sporadic attacks by ISIS fighters and their allies, which have been rebuffed by the Iraqi troops. Putting the refinery back online would be a huge financial gain for ISIS, especially as a US-led coalition is bombing ISIS-held oil facilities in neighboring Syria, hoping to choke off the group's source of black market income.

It's equally valuable to the Iraqi government, which depends on the plant for an estimated one-third of its national oil output.

But so far, neither side has taken steps to end the impasse. An all-out fight for control of Baiji would likely cause damage to the plant that could render it unusable by the victor. And, Lando points out, "there would be mass casualties from the explosions."

Despite the standoff — or perhaps because of it — Iraq's new oil minister, Adil Abdul-Mahdi, devoted his first full day on the job to a high-profile visit to the refinery on September 11.

"He actually took a helicopter into Baiji and landed and there were some rockets shot at him," Lando says. "But he survived and he published pictures — on his Facebook page, actually — of him touring the facility."

This week, Iraqi security forces, with support from Iraqi Army helicopters, fought off another ISIS attempt to capture the refinery. An Iraq Oil Report article describes the attack, which began with a suicide car bomb at the gate followed by a mortar attack and gunfire.

Lando, whose network of observers tracks activities that affect Iraq's oil industry, says new efforts by the US-led coalition to beat back ISIS raise questions about what Iraq would look like after a retreat.

"In the north of the country, where ISIS and the militants and their allies have been able to take control, there's a lot of infrastructure that needs to be rebuilt — pipelines and storage tanks throughout northern Iraq that have been destroyed or damaged," Lando says.

Lando believes restoring Iraq's oil infrastructure could cost billions of dollars: "We won't have a final price tag until we see what kind of damage is inflicted by ISIS on their way out."