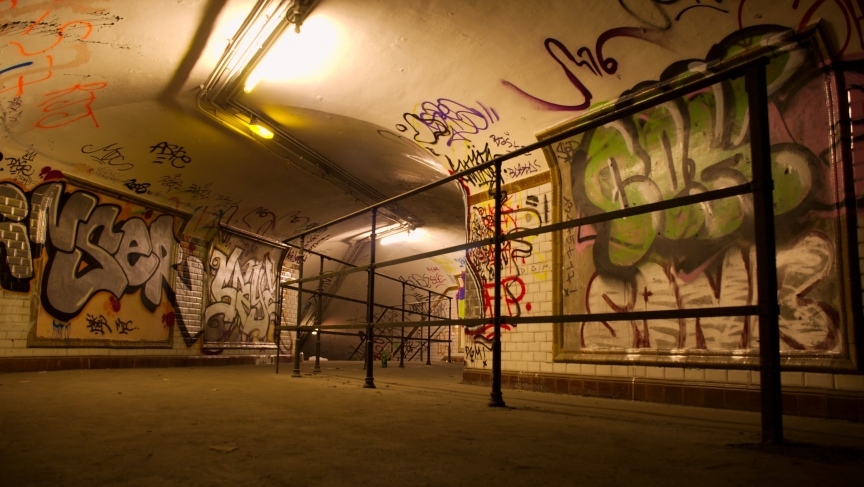 The abandoned Saint-Martin station of the Paris subway is one of many ghost stations around the world.
Credit:

From New York to London, Pyongyang to Tokyo, Paris to Santiago, dozens of subway stations have been closed. But they still exist, waiting for the next train to show up — and perhaps beginning to show signs of their neglect.

They've been closed for a variety of reasons: In Chile, earthquake damage put them out of commission; in New York and Tokyo, old stations weren't compatible with newer trains; in Pyongyang, one station was closed because it connected to the giant palace that became a mausoleum for the country's former leader, Kim Il-Sung.

While those reasons are different, they all share something in common: They still attract the curious to their abandoned platforms and largely unseen walls. Now a new movement is afoot to convert some of these abandoned stations back into public spaces, perhaps as pools or gyms or other gathering spots. The Guardian takes you inside some of these ghost stations and peels back the reasons why they were closed — and what the future may hold.

Nevermind climate change. Now the Earth's magnetic field is in decline too

The Earth may be on the verge of a big shift in its magnetic fields, one so significant that the north pole will become the south, and vice versa. Scientists say the actual switch may happen within as little as 2,000 years and be complete in just a few thousand years. Of course, they admit, this could be a false start and nothing might happen at all. But this wouldn't be the first time the poles moved; scientists have been able to document several shifts throughout Earth's history.

The consequences of any shift in the Earth's magnetic field are hard to predict. But with literally thousands of years of warning, it's likely that humanity could manage to deal with any change. Among the theoretical problems, though, are increased solar radiation, burned out transformers and powerlines, as well as other interference with the global power distribution system. Scientific American looks at what's leading scientists to say such a shift is on the way, as well as possible effects of a north-south switch.

In recent months, China has been turning away shipments of American corn. Beijing it says the crops are contaminated with trace amounts of a GMO called Agrisure Viptera that's has been approved in the US, Canada and the EU — but, for unknown reasons, still isn't allowed for consumption in China.

That could have huge costs for US businesses like Cargill and Trans Coastal Supply, so they're filing a lawsuit against the company behind Agrisure Viptera, Syngenta. They claim Synegnta acting negligently in commercializing their GMO corn without getting approval from such a major export market for corn. The prospects for the lawsuit are considered dim, but the impact of the case going to trial could be huge, no matter which side prevails. PRI's Living on Earth has more.

Fifteen Malaysian customs officers made waves when they recently appeared in court and attempted to conceal their identity — by wearing underwear on their heads. The officers weren't showing up to testify, though — they'd been detained by the government as part of a crackdown on bribery and smuggling.

The government believes official corruption, like accepting bribes and helping smugglers, is fueling the growth of organized crime and terrorism. If they're ultimately convicted, they could face 20 years in prison and fines of up to five times the bribe they are accused of having taken. The BBC has more.

The other side of Ukraine

Ukraine's been all over the news because of the violent civil war being fought between government forces and Russian-backed rebels in the eastern part of the country. But Ukraine is much more than a conflict zone. A new smash-hit music video is one example of the country's vibrant cultural contributions, which continues despite the violence in the country.

The video is for a song called "Knock Knock" by a Kiev-based indie-electro-pop band called Brunettes Shoot Blondes. It was shot on 14 separate iPhones and iPads, giving it a DIY feel. The video tells a love story spread out over many small screens. It's been viewed more than 2 million times. PRI's The World talked to the band's lead singer and video director about his project. Make sure to check out the video, too.

A Chat with the Canadian ISIS Member Who Burned His Passport on YouTube http://t.co/1To4EnFf3J

A strong storm moved into Sydney on Thursday, complete with dark, ominous clouds. A group of sailors decided rather than heading for safety that they would stay on their boats and record the on-rushing storm. The video that they recorded shows the calm, the clouds and then the rain. While the storm didn't really do damage, the video is pretty cool.